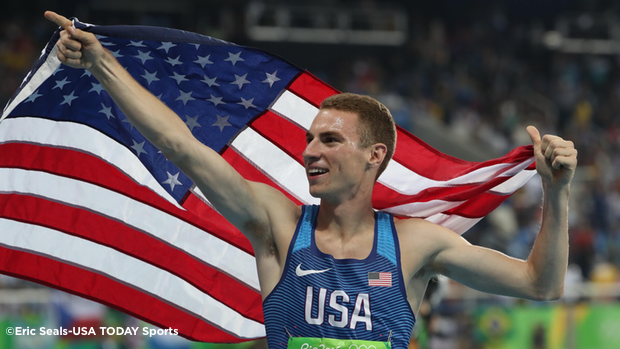 In a fast-starting Olympic final, David Rudisha ran 1:42 to defend his Olympic title in Rio. Clayton Murphy became the third-fastest 800m runner in American history with a 1:42.93 performance for a bronze medal. It's the first American male 800m medal since 1992--three years before Murphy was born.

Clayton Murphy was one of the stars of the U.S. Olympic Trials at Hayward Field in Eugene, Oregon this year. The NCAA 1500m champion for Akron and newly minted Nike pro overtook Boris Berian in the final stretch to win the men's 800m final in 1:44.76 over Berian's 1:44.92.

Now, the 21-year-old Murphy is going to Rio. But that doesn't mean he lost the chip on his shoulder from racing as an unknown for most of his career.

A month before the 2012 Olympic Trials, Murphy, then a junior at Tri-Village High School, was on the 1600m starting line of the state track and field championships at Ohio State's Jesse Owens stadium. Murphy hadn't lost many races that year, but he finished fourth that day in 4:16.81 as his opponent, Cory Glines, won in a Division III record of 4:12.93. It lit a fire under Murphy. After that moment, he was determined to be the best.

That's easier said than done in a town of about 890 people with a high school graduating class of 60. New Madison, Ohio, wasn't exactly a hotbed for up-and-coming athletes. Murphy was one of six people on Tri-Village's cross country team.

He never ran at Nike Cross Country Nationals, Foot Locker Nationals, Brooks PR, or New Balance Nationals. He did represent Team Ohio at the 2012 Mid-East Championships and 2013 Midwest Meet of Champions, but never competed at the national level in high school.

While Murphy was cloaked in anonymity, other Ohio prep talents were thriving: Sam Wharton, the 2012 NXN champion and best distance runner in Division I, committed to Stanford. Jacob Dumford, the state's top 800m/1600m runner, signed with Notre Dame. His friend Sam Prakel, who would finish fifth in the 2016 NCAA 1500m for Oregon, won the Division III state cross country title, was the Division II champion in the 1600m and 3200m, and qualified for Foot Locker Nationals. Glines, future Northern Arizona runner and Big Sky Conference 10K champion, won the state 1600m title and was runner-up to Prakel in cross country.

Despite his lack of consistent training, Murphy was always within striking range of them.

He put himself on the map after finishing sixth at the 2011 Division III Ohio state cross country championships. The next year, he qualified for the 800m and 1600m finals at the 2012 Division III track and field championships as a junior, where he ultimately finished 15th and fourth, respectively. The emptiness he felt afterward put him on the path toward becoming one of the top 800m runners in the world.

He said the biggest change heading into the next year was mostly on the track. "Learning how to race and having confidence in myself was the biggest thing," Murphy said. "I didn't lose many races in high school; it was a lot of having fun racing people. Junior year at state was the first time I really raced people and got beat. So going into senior year, I had a little chip on my shoulder and motivation."

One year later, he reached his goal--and then some. In an epic kick to the finish, Murphy got Glines at the line to break his rival's Division III state meet record on it's one-year anniversary.

"That was a fun race. I have it on my computer, and watch it time-to-time to recollect it," Murphy said. "It'll be something to have as a keepsake for a long time."

That day, Murphy shocked a lot of people, but it would not be the last time.

His future Akron coach Lee LaBadie saw massive potential in him during that race. "When I saw Clayton in high school, I saw the smoothness, the rhythm in his form while he was racing. When I was watching him, I was like, 'Wow, that's a stud,' having coached a few studs before," LaBadie said.

Clayton's freshman year at Akron showed glimpses of his true potential as an elite NCAA contender. He started doing more of the little things to make him a better athlete.

"I feel like freshman year for me was really my senior year of high school for a lot of people as far as learning to do the things that make you an elite runner," Murphy said. "I started stretching more and doing core, icing and recovering, getting treatment and sleeping nine hours a night. Eating better meals and taking protein after practice and just the little things that a lot of elite athletes do as second nature, I was learning how to do those things and incorporating them into my regular routine."

Murphy's sophomore year was his breakout party. He ran 4:00.39 in the mile indoors, and won the MAC indoor mile and 800m. At the NCAA Indoor Championships that year, Murphy was still flying under the radar, but that all changed when he finished third--a performance he would repeat at the outdoor championships.

But then, it got even better for Murphy. At the USATF Outdoor Championships, he finished fourth as a 20-year old who, just a year ago, had never broken 1:50. He went on to win the 800m at the 2015 Pan-Am Games and nab second at the NACAC Championships. That was supposed to be the end of the season for Murphy, but then he got a call from USATF.

Due to contract disputes, there was a possibility that U.S. 800m champion Nick Symmonds would not compete at the IAAF World Championships; if that panned out, Murphy would be next in line.

Suddenly, Clayton was flying to Beijing to represent Team USA. Many did not know what to expect from the 20-year-old being thrown into the lion's den for his first world championships, but Murphy shocked everyone again.

Among the best in the world, Murphy was the top U.S. finisher, and made it all the way to the semifinals while topping seasoned pros Cas Loxsom and Erik Sowinski.

"Sophomore year was when all those little things culminated and became second nature for me," Murphy said. "I could have fun with races. I put myself on a level playing field with everyone else, so I'm not afraid to race anyone."

Finally, Clayton was no longer an unknown. He was one of the best runners in the country. 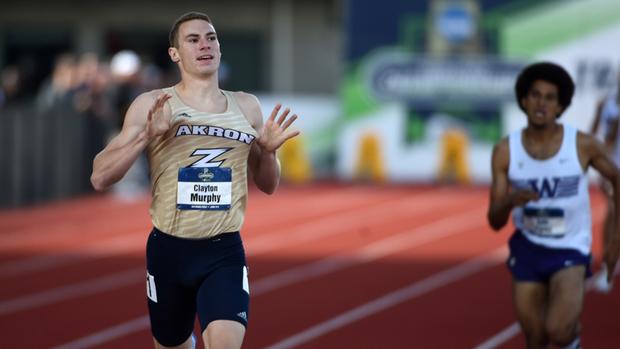 Murphy was a two-time national champion and 13-time MAC champion during his three years at Akron.

"(Clayton) was literally the little guy coming out of high school," Garrett Critchlow, Murphy's teammate at Akron, said. "He didn't have the fast PRs or all of the gold medals. But he knew he had a lot of potential and heart to give to the sport and that is what he exactly did these past few years. He gives back to the community; he makes the team stronger; and he helped put Akron on the map along with the rest of the team, our coaches, medical staff and student body, which pushed us to do better," said Akron teammate and junior Garrett Crichlow.

Coach LaBadie added, "There are qualities of a champion that Clayton has. He's a natural encourager of peers/fellow teammates to be the best they can be. He's a team guy, not big on himself; he has the right balance between school and running. He communicates with the coaches when the work is hard, when the work is easy, and when it's in between. He learned from his mistakes and made corrections so those mistakes don't show up very much in the future. It's rare to find someone who can do all of this in a short period of time."

Murphy's junior year was different--he was expected to win every time he stepped on the track. And when the stage was the biggest, that's what he did. He broke the four-minute-mile barrier for the first time on his home indoor track. He defended his individual indoor and outdoor MAC titles, and added two NCAA titles to his name in the indoor 800m and outdoor 1500m.

Having accomplished so much at the NCAA level, he gave up his final season of eligibility to go pro with Nike. Shortly after, he achieved the ultimate goal. He defeated the nation's top elite runners in the 800m to qualify for the Rio Olympics in a PR of 1:44.76.

"Nothing has changed since the moment I've met Clayton. If it's competitive, he wants to win," Dan Zupan, Murphy's teammate at Akron, said. "Doesn't matter if it's video games, golf, or obviously, running. We've become really close friends, and even though he is the fastest 800m runner in America that'll never change."

Murphy winning the 800m at the U.S. Olympic Trials. He will represent the U.S. at the 2016 Summer Olympics.

Fours years ago, if anyone said Murphy would be the best 800m/1500m runner in the country, no one would have believed it.

"Learn how to do the little things and staying healthy," Murphy said. "Doing core, stretching and eating right can go a long way with being healthy and making your career last longer. And having fun and having confidence in yourself."

At this rate, nothing is impossible for Murphy as he looks forward to the Olympic 800m with one goal in mind: be the best.