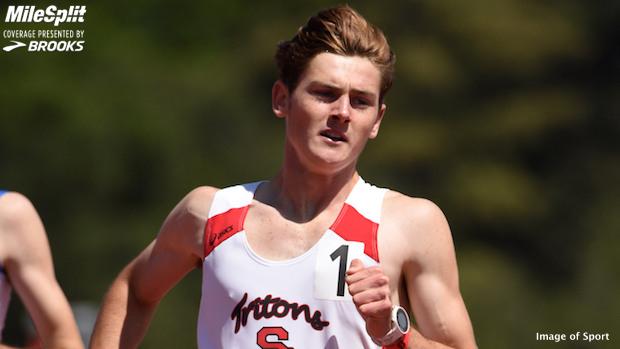 One of the breakout stars of 2016, San Clemente's Connor Dunne ran 4:04 for a mile in March and hasn't lost all year. We talked to him on Sunday--after he won the mile at Arcadia and before this weekend's Mt. SAC Relays--about how he got here. You can watch every Mt. SAC Relays race live on FloTrack.

MileSplit: Congrats on the big win at Arcadia last night, how did that feel?

Connor Dunne: It felt good. I came in as the No. 1 seed, so I knew I had a good chance. But a lot of those guys are tough, and the race didn't turn out the way I thought it would with that slow start. So to come away with the win, that's a big meet to win.

I did not expect to run 4:04. I wanted to run 4:06, but even that I thought was going to be really fast, really hard. And it was the first full mile race I ever ran. [Austin] Tamagno took it out fast. I really surprised myself.

Racing against these fast guys I've looked up to since I was a freshman, I never thought I'd be able to match their level or even beat them. I'm still new to the 'being really successful' thing, so I don't get overconfident. I just keep training hard.

Starting with the short term, what do you want to achieve at Mt. SAC this weekend?

Austin is also in that race with me, so I think it could be really fast--maybe even faster than 4:04. I'll try to win and shoot for a fast time.

More broadly, what do you want to achieve before you graduate from high school?

I think after Mt. SAC, we're going to gear toward the 800 again, then run it at state. Postseason, I want to run at junior nationals in the 800 and shoot for the [world juniors] team.

Was there anything in training that indicated such a huge breakthrough was coming this year?

Running this fast was a bit of surprise, but I've just been doing harder, faster, and longer workouts. Plus, I've consistently improved. I started freshman year at 4:36 for 1600; sophomore year, I ran 4:27. So that's a little less than 10 seconds. Junior year I ran 4:14, so that's 13 seconds. This year, I stayed on the same improvement curve.

Was there one workout that was really a killer?

Oh, and that workout started with an 800 in 2:05. I've been doing those types of workouts for a while, but never that fast. That one made me realize I was in pretty good shape.

How much mileage do you run a week?

I think my highest week was in the high 50s. During race week, I drop down to the 40s.

I do a lot of quality miles, not quantity.

Once I transition into college over the summer, I'll build up my mileage. [Colorado] Boulder is a huge mileage school. They said they'll gradually increase it, but over the summer I'll be able to put in a lot of quantity.

​Do you know what you want to study in college? What do you do well in right now?

I like science stuff. I took anatomy last year, so I'm pretty interested in that. I'm looking into kinesiology or applied physiology, all stuff that relates to running--how the body works, what muscles do what things.

So you're a big student of the sport.

Yeah. My coach is also my dad, so he knows a lot of this. He's constantly teaching me new stuff, I learn a lot from him. I'm constantly interested in what I'm doing and why I'm doing it.

Are there any challenges to being coached by your dad?

It goes smoothly. If I wonder why I'm doing a certain workout, he'll usually have a satisfying answer. If there's a time when I think I'll be better off--like, today I was supposed to do 10 miles with a seven-mile tempo, but this week leading up to Arcadia I trained pretty hard. So we dropped it down to just an eight-mile easy run. That's the good thing about living with your coach.

He coached at San Diego State and San Clemente High School (where I go), but now he just coaches me and anyone else who wants help. He's kind of a strict coach, so if people don't stick to the program, they're out.

Your high school has a track team, but your dad coaches you? Is that right?

Yup, our high school program is low-key and not very strict. Our coach has more of a "have fun" program.

So he doesn't mind your dad coaching you?

Yeah, they're glad to just have an athlete be recognized.

Any college or pro runners that you particularly like watching?

I like watching Nick Symmonds. He has some controversial ideas, but I like him. I like Matt Centrowitz--he was actually at Arcadia doing autographs, but that was during my race, so I didn't get to meet him. I like Duane Solomon, but I don't stick to one particular athlete.