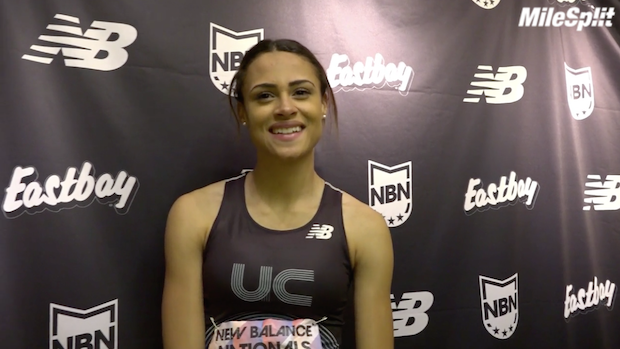 Sydney McLaughlin won two national titles at New Balance in the span of an hour on Sunday, breaking the 400 national record in 51.84 and then coming back and anchoring Union Catholic's winning 4x400 with a 51.7 split. The 400 time is an unofficial world youth best, and McLaughlin is the defending world youth outdoor champion in the 400 hurdles. We caught up with the sixteen year-old at the end of the meet on Sunday.

Sydney McLaughlin: Um, not really. It hasn't really hit me yet. This whole season--after I knew I couldn't hurdle this season because of my groin, my coach was like, "OK, you're going to do the four at nationals." I kind of laughed at it, because the four's a really intense race. He was like "You're close to the national record, you can get it, you're training's been there. To just go out and finally get it is amazing. Crossing the line I was like "Oh, I'm done!" And everyone was like OHHHHH; and I was like [gestures as in picture above]--"it happened!"

It hasn't really hit me yet.

It seemed like you went out slower this time that you did in the prelim.

Yeah, I kind of just cruised the first 200 and just really focused on the back on my form, and my form got better. Without that, I wouldn't have run the time I did today.

What was your strategy in the first round?

That kind of concerned me. But I knew if I got my legs back, got my ice bath and everything, today would be a fast time. And it was.

You said that your coach said that the national record was within reach. Was that something he's been talking about all season, or just in the past couple days?

No, that's been the whole season, that's been the overall goal. And, you know, that's what my training's been really based towards. Just go out there and do what you do, and you'll get it. I'm really happy I finally did.

Can you tell me a little bit more about the groin injury? How long has it been bothering you?

Since the beginning of the season. I did some hurdles [in practice], and I could feel it. Last year, I had the same thing, and my coach said that we don't want to risk it getting worse for outdoor, so we'll aim towards the four. So I guess that's what started the whole national record.

You said you were really excited for the week off.

Kit-Kats. Lots of those.

Are you going to be hurdling again outdoors?