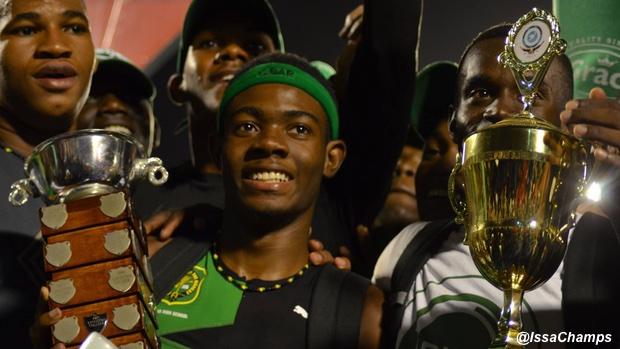 Jamaicans are the stars of the show every year at the Penn Relays Carnival, thanks in part to a racing schedule that sees them peak in late March and April while American athletes are just starting the outdoor season. The Jamaican prep championships, the ISSA Boys & Girls Champs, took place this past weekend. Below are a few names to remember as Penn Relays approaches.

The Age 15 World Record holder for 400m (watch his 45.69 record here) set two meet records by running 20.8 (-0.4) in the 200m and 46.33 in the 400m to sweep the Boys 14-15 Class 2 Finals. He produced the performance of the meet in the Open 4x400m Relay, where he faced Class 1 rival Akeem Bloomfield, the Jamaican National Junior Record holder at 44.93, on the anchor leg. In a dramatic finale, Bloomfield surged ahead of Taylor before the Calabar leader closed the gap in the final 70 meters to secure the win, 3:09.77 to 3:10.26. Taylor split 45.3 and Bloomfield split 44.5. Taylor's anchor as well as his individual wins aided Calabar to their fifth consecutive Champs title.

Christopher Taylor takes Calabar home in 3:09.77 ahead of KC with Akeem Bloomfield 3:10.26 #taChamps

Bloomfield defended his Boys 16-19 Class 1 400m title in 46.12, which stood as the fastest time of the day. In the 4x400m Relay OPEN Finals, he ran a gutsy 44.5 anchor leg to take Kingston College from third to second. Last year, Bloomfield became the first Jamaican prep to break 45 seconds last year with his 44.93 National Junior Record.

Bloomfield SPLIT 44.5 ... Amazing anchor leg from Akeem Bloomfield, who got the baton for KC in third, about 12 meters...

Ellis had a poor start in the 100m, but closed well to overtake Raheem Chambers of St. Jago, who placed second in 10.25.

Watch the video below to see Ellis' race and a post-race interview, where he said he overcame his typical poor start by listening to his coach's advice: "swing my hands over my head and stay near to the ground."