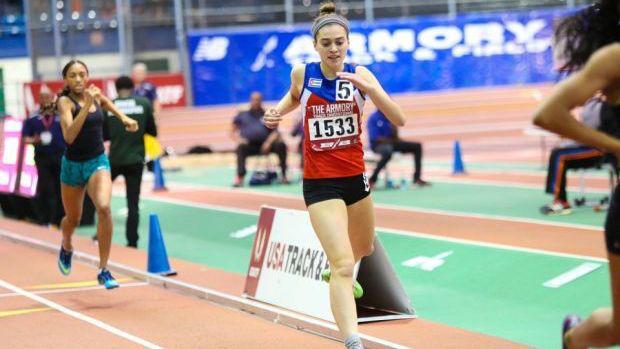 Sarah Walker had a spectacular 2015. She took second at New Balance Nationals Outdoor, ran 2:03, and signed with Stanford. But 2016 has been a little tougher for the Germantown Friends senior, who recently learned that she has a broken bone in her foot. We talked to her this week about how, somehow, she views that as a win.

MileSplit: What exactly happened with your foot?

Sarah Walker: I had a bunch of little things that were going wrong most of this year. We didn't really know what was going on. I'm not sure of the timeline exactly, but I started having some serious pain in my right foot for about three weeks. The last thing I did was race a 600 at the Armory And the next day, I couldn't walk, barely. I went to see a foot doctor on that Tuesday and I had an avulsion fracture, which is like a muscle sort of ripped off a piece of the bone.

Since then, I've been working with a bunch of different people. There's been a really good team for this whole thing. My coach [Rob Hewitt] helped gather a team of doctors, a reconditioning expert, a chiropractor, and trainers at school. So basically, I have really poor ankle mobility, and that was what was causing my problems.

What was your reaction when you found out it was a fracture?

For the first day or so, it didn't really sink in that I was hurt. So there was a lot of trying to figure out plans, like how I'm going to keep training and get healthy again. Most of the beginning was preoccupied with coming up with new ideas and new ways to train. Of course, the thing I was thinking about most was when I'd be able to get back.

Has there been any change for you personally or in school? I feel like a lot of runners can struggle academically when they're hurt.

I feel like I'm even more busier than I'd be if I were running between going to the Y and driving between doctors. So no crazy parties! Just driving around and trying to get in all the training that I need, which takes more time than it would to just go out for a run.

What are some of the non-running workouts you've done?

Every day I'll do some pool running  with some combinations of straight runs and workouts. You can actually work out harder in the pool, with rest shorter than it usually is on the track. I'm starting to see the routine people at the YMCA pool.

I'm doing some fartleks on the bike. Weightlifting and strength, including stuff with mini-bands, has been a big part of this recovery. I do plyometrics and drills in the pool so there's less stress on my body. And I've been doing a lot of fascial stretching, which has the most uncomfortable positions invented by anyone. But it does stretch you out.

That all probably takes two or three hours a day.

When are you coming back?

I'm not really sure yet--when I'm fully healthy. Maybe I'll sneak in some time and people won't know! We'll just have to see with where I'm at with feeling healthy.

Your coach told me that this has been a huge learning experience. What have you learned?

I mentioned that this whole year, sort of little things have been bothering me, and they weren't really big enough injuries to do a lot about them. So in a way, it's sort of like a good thing that this happened, because we got to scratch everything clean.

It's a step forward. Now I know what I have to work on with my ankles and what we can do to fix things and make sure that I'm healthy going forward.

I've met a lot of cool people besides the old people at the YMCA pool! There have been some cool doctors and people that I've gotten to work with.

I don't know what I was expecting, but you sound incredibly upbeat for someone with an injury like this.

I guess that's just how I am usually--just trying to think of ways that things can be improved in the big picture. It was definitely tough--the hardest part for me has been being away from my team. I have a lot of fun with them. So being at the Y by myself--it's fun sometimes, and it's nice having my own space every once in a while, but I'm definitely a people person. I like to be around people, so not being around my team has been hard.

But in general, learning this thing about the way that my mechanics are is only going to help me in the future. In a way, it was almost good that this happened now and not next year when I'm in college. The coaches won't know me as well as a freshman, I'd be in a different place, my parents wouldn't be there. Basically, for it to happen now is way better than if it happened in a few months, even though I missed states.