Today would be Steve Prefontaine's 65th birthday. His death in a May 1975 car crash is one of the great tragedies in the history of American sports, and the bravura performance that was his life created an inspirational cottage industry that's going strong four decades later. Every mildly serious American runner has, at some point, encountered it. Without Limits is one of my favorite movies ever, and I had a poster in various bedrooms from roughly 2005 to 2011 of this great photo of Pre looking back. If I were in a teenager in 2016, there's a 100% chance that all of my social media accounts would be covered in Pre quotes, including one of the most iconic ones: "The only good pace is a suicide pace, and today looks like a good day to die." (Runners love tweeting that.)

There's only one problem with that last quote. There's no evidence that Pre ever said it.

Poster of Pre with the quote, available for $25: 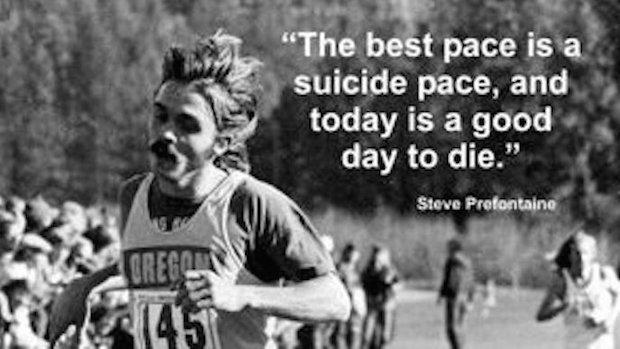 I emailed Tom Jordan, the director of the Pre Classic and the author of the biography Pre: The Story of America's Greatest Running Legend asking him about the quote. Here's what he said:

I have never heard that quote before and never ascribed to Pre. Not that he couldn't have said it, but I figure if it were genuine, I would have heard it before now. The closest thing to it that I know is from him is the "I plan to put crap in their legs" (or something like that) quoted before the '72 Olympic Games.

You can access every edition of The Oregonian ever printed for a mere $10. We'll save you a Hamilton--the phrase "suicide pace" appears once, in 1955, referring to a car. The phrase "suicidal pace" appears twice: once in 1930, and once in 1985, when Alberto Salazar said "If anyone goes out at a suicidal pace, I'll probably sit back" before that year's Olympic Trials.

Every edition of the Eugene Register-Guard is scanned into Google's newspaper archive; if you search that, which contains scanned editions of many more newspapers, all thirty-one uses of "suicide pace" are not attributed to Prefontaine.

When MileSplit editor Jojo Gretschel first mentioned to me that the quote seemed fake to her, I felt like garbage. If Prefontaine's races were "works of art" (we're confident he said that), and "art is what we need to believe is true"*, then I need to believe that Prefontaine so perfectly described his artistic process. The idea that each race is a war against what's possible that could end disastrously is the key to the Pre mystique. His willingness to go on a suicide mission every time he raced was and is unparalleled--even if he never put it that way.

UPDATE: ​Kenny Moore, the author of ​Bowerman and the Men of Oregon ​and ​Best Efforts​, and a contemporary of Pre, wrote us the following email:​

I never heard Pre say those words, and if you can't find them elsewhere, I think there is a reason.

The essence of Pre's front running was the opposite of suicidal. He wanted to make everyone following suffer, but with the object of getting the most out of his own races. He very much wanted to be alive and strong at the finish.

To me, and surely to him, "a suicide pace," means ripping away at truly physically unsustainable speed. He never came close to doing that, and rolled his eyes at those who did and died trying.

Imagine an impressionable young cross-country runner, lying panting in the chute after a maniacal start has led to major oxygen debt failure. He sees a concerned Pre standing over him, and gasps out that he'd been inspired by his "suicide pace" quote.

*Another quote that we couldn't find the origins of...