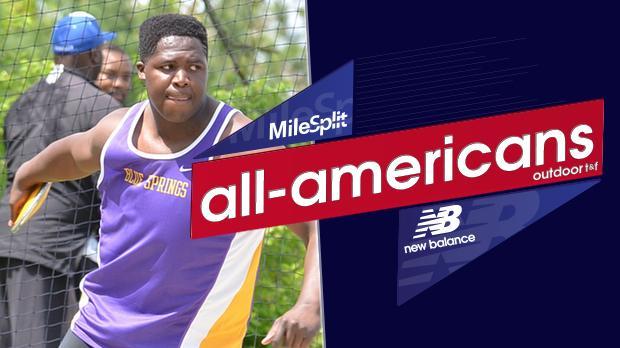 Carlos Davis the Missouri State Champion threw 214-4 to end the season as U.S No. 1.

1.Carlos Davis (Blue Springs, MO - Sr.) -- The senior from Blue Springs, MO captured major wins this season at the Missouri State meet, Great Southwest Classic, and at the Kansas Relays. However, his best performance came from the Gary Parker Invitational when he threw U.S No.1 214-4.

2.Khalil Davis (Blue Springs, MO - Sr.) - The Blue Springs, MO senior ended the season ranked U.S No.2 behind his brother Carlos Davis. The senior placed 2nd at the Missouri State meet, 3rd at the Great Southwest Classic, and 3rd at Kansas Relays. His best throw of the season was when he threw his U.S No.2 205-8 to win the Class 6 Sectional 3 title.

3. Adrian Piperi (The Woodlands, TX - So.) - The Sophomore won both the Texas state meet and the TTFCA meet of Champions. On the national level, he took 3rd place at the New Balance Nationals Outdoor meet. At the USATF World Youth Trials he threw a pr of 192-11 to grab the win and punch his ticket to Cali, Colombia

4. Lucas Ribeiro (Belmont Hill, MA - Sr.) - Although the senior from Belmont Hill only competed twice this season, he won both the ISTL Championship meet, and the New Balance Nationals Outdoor meet.

5. Christian Smith (McDonald, OH - Sr.) - The McDonald, Ohio senior had a great season this year by capturing wins at both the Ohio Division 3 State meet, and the Midwest Meet of Champions. On the National level, he placed 5th At the New Balance Nationals Outdoor meet. Arguably, his best performance came from the Western Reserves Relays when he won the meet in his U.S. No.3 203-9.

6. Trevor Detillion (Unioto, OH - Sr.) - The Senior from Ohio was able to capture the Penn Relays title with a U.S No.4 203-6.5. He also won the Ohio Division 2 State meet, and place 2nd at the Midwest Meet of Champions.

7. Willie Morrison (Leavenworth, KS- Sr.) -On top of his amazing shot put season, the senior also had a great discus season. He won the Kansas state meet, and placed second at both Kansas Relays, and the Great Southwest Classic. At the New Balance National Outdoors meet he finished 9th

8. Malik McMorris (Mater Dei, CA - Sr.) - Early in the season, the senior from Master Dei High won the Arcadia Invitational. From there on out he went undefeated until the California state meet were he placed second .