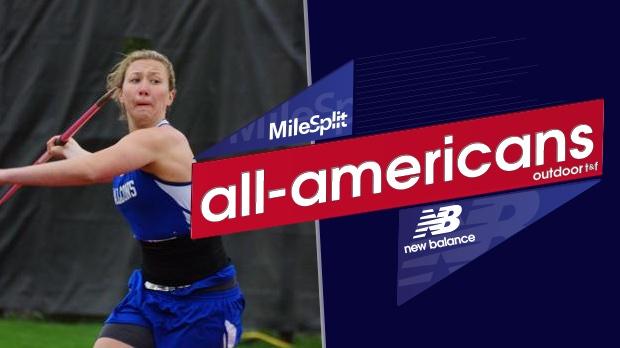 Madison Wiltrout, only a sophomore, broke the National High School Record in the Javelin with her 185-8.25 throw.

1. Madison Wiltrout (Connellsville, PA - So.) - Wiltrout had an impressive season throwing the National High School Record of 185-8.25 to win her district meet. The sophomore threw over 160 feet at all but one meet this year. She is already a two time Pennsylvania State champion in the javelin and she’s only a sophomore.

2. Sophia Rivera (Brentwood, MO - Jr.) - During the season the senior had several big wins including wins at Kansas Relays (162-9) and Penn Relays (169-6.75). The six-time Missouri State Champion finished off her season with several impressive postseason performances too. The senior won Great Southwest (152-1), NBNO (157-2), and USATF World Youth Trials (169-3). She will represent team USA at the World Youth Championships in Colombia.

4. Gabrielle Kearney (Roseburg, OR - Sr.) - The senior was undefeated all year until NBNO when she placed third just behind Sophia Rivera (157-02.00) and Tairyn Montgomery (156-08.00). The two time state champion finished out her season with a win at the USATF Junior championship meet throwing her season best 162-8.

5. Keiryn Swenson (Maize, KS - Sr.) - The only loss she had all year was to Sophia Rivera at Kansas Relays. Swenson took second there throwing 144-02. The Senior, capped off her season winning her state meet with a new Kansas State record and U.S.#5 throw of 162-5.

6. Tairyn Montgomery (Redondo Union, CA -Jr.) - The junior had several impressive performances late in the season. Her best throw of the year came just last week at the USATF World Youth Trials where she threw a U.S. # 7 162-0 to place third. Just a few weeks before that she placed second (156-8) at NBNO just behind Sophia Rivera.

8. Brooke Hinderliter (Redbank Valley, PA - Jr.) - The Junior had a great season throwing a new PR and U.S. # 8 of 158-9 to win the Pennsylvania State Meet. She finished off her season placing seventh at NBNO with a throw of 140-4.