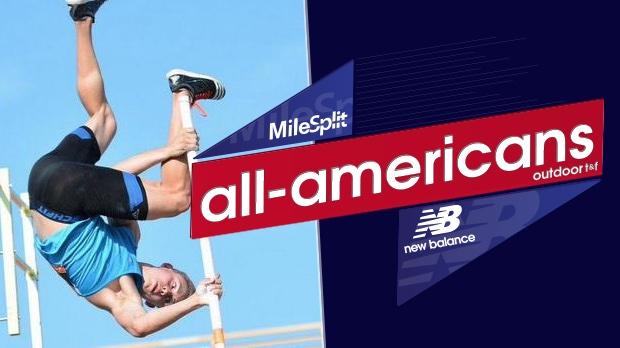 Benavides cleared a U.S. # 1 height of 17-10.5 to take second at the USATF Junior Championships

1. Paulo Benavides (El Paso Franklin, TX - Sr.) - Benavides has shared the top spot on the leaderboard for most of the year with Deakin Volz. The senior secured the No. 1 recognition on this list after two big postseason wins over Volz at both NBNO and USATF Jr. Nationals. The Kansas commit cleared 17-10.5 to place second at USATF behind college freshman Audie Wyatt, and the weekend before that, he won NBNO, clearing 17-5.

2. Sean Collins (McGill-Toolen Catholic, AL - Sr.) - The two-time Alabama State champ was consistent for most of the season, clearing around 17-00 feet. At the USATF Junior Championship meet, the senior had a breakthrough performance, clearing a seven-inch personal best of 17-10.5 to take third.

3. Deakin Volz (Bloomington South, IN - Sr.) - The two-time Indiana State Champ had an impressive season, clearing over 17-00 feet every outdoor meet this year. The senior finished second at NBNO, just behind Benavides in 17-5. He followed up that performance with a fourth place finish at the USATF Junior Championship meet, clearing 17-0.75. His best vault of the season was 17-7, which ranks U.S. No. 3.

4. Armand Duplantis (Lafayette, LA - Fr.) - Only a freshman and Duplantis is already an All-American after placing third at third at NBNO clearing 17-1. The Louisiana State Champ also had an impressive postseason performance at the Great Southwest Classic clearing 17-0 to place third. Duplantis best vault of the season came at his region meet where he cleared a U.S. No. 5 mark 17-4, which stands as the National Freshman Class Record.

5. Tommy Dial (Jenks High, OK - Sr.) - Dial was only beaten once all outdoor season when he placed third at Texas Relays. The senior won his state meet with his personal best and U.S. No. 6 mark of 17-2. He then went on to win the Great Southwest Classic, clearing 17-0.

6. Brandon Bray (China Spring, TX -Sr.) - Bray was the Texas Relays champ early this season clearing 17-1. The senior went undefeated all the way through his state meet and the TTFCA Meet of Champions. At the Great Southwest Classic Bray won in a jump off. His first loss of the season came at NBNO where he finished seventh clearing 16-5.

7. Christopher Nilsen (Park Hill, MO - Jr.) - What a year for Nilsen! The junior entered 2015 with a personal record of 12-3 and leaves the school year with a new all-time best of 17-0. Yes - he improved by five inches this year to lead next year’s contingent of national record-chasers. After improving to 14-11.25 indoors, Nilson broke out in outdoors, winning his first Missouri state title to tie U.s. No. 7 17-0.

8. Antonio Ruiz (Tomball Memorial, TX - Sr.) - Ruiz is ranked U.S. No. 7 after clearing 17-0 at the Tomball Wildcat Relays. The senior placed third at both the Texas State Meet and the TTFCA Meet of Champions vaulting 16-0.