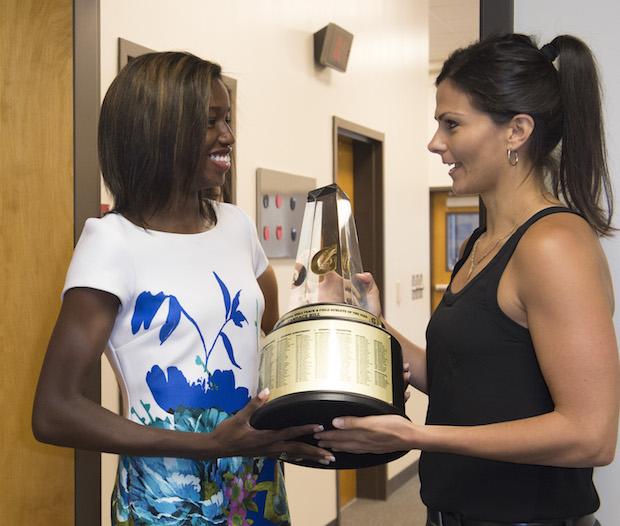 The award, which recognizes not only outstanding athletic excellence, but also high standards of academic achievement and exemplary character demonstrated on and off the field, distinguishes Hill as the nation’s best high school girls track & field athlete. A national advisory panel comprised of sport-specific experts and sports journalists helped select Hill from more than 478,000 high school girls track & field athletes nationwide. Hill is now a finalist for the prestigious Gatorade Female High School Athlete of the Year award, to be presented at a special ceremony prior to The ESPY Awards in July. 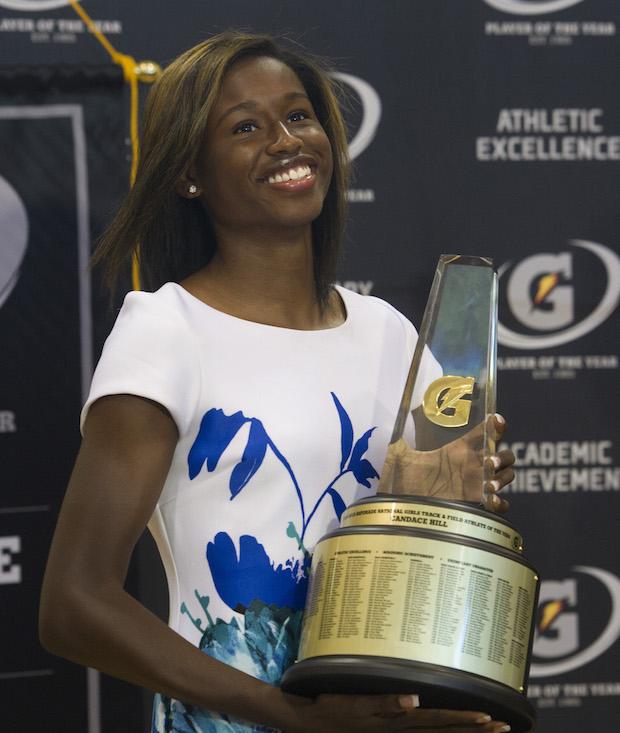 The 5-foot-8 sophomore became the first high school girl to break the 11-second barrier in the 100-meter dash, clocking a time of 10.98 at last week’s Brooks PR meet. The record-setting performance makes her the world’s fastest Junior (under 20) in the event and she ranked No. 10 worldwide amongst women of all ages at the time of her selection. Hill, who turned 16 in February, won the 200-meter dash with a state-record time of 23.05 seconds as well as the 100 in a state-record 11.34 at the Class 6A GHSA Track & Field State Championships this spring. Georgia’s returning Gatorade Girls Track and Field Athlete of the Year, Hill also won the Adidas Dream 100, the 200 at the Prefontaine Classic and both the 100 and 200 at the Great Southwest Classic. Hill’s season-best times in the 100 and 200 rank as the nation’s No. 1 performances among prep competitors in 2015.

Hill has maintained a weighted 4.61 GPA in the classroom. An inductee into the National Society for High School Scholars, Hill is a member of her school’s Junior Beta Club and serves as an ambassador on behalf of the Rockdale Magnet School for Science and Technology. She has also donated her time to a variety of charity drives to help the needy, including the Berean Christian Church clothing drive and the RMSST Food Pantry drive to benefit the Rockdale Emergency Relief Center, in addition to participating in holiday toy drives with multiple philanthropic organizations.

“One year after the prep record (was broken with an 11.10), Candace Hill has pushed the envelope even further,” said Doug Binder, Dyestat Editor-in-Chief. “There’s been a lot of talk this spring about high school boys who have broken four minutes in the mileand rightly so-it’s an exclusive club (of seven). But the first high school girl to break the 11- second barrier in the 100 meters? That club has only one member, and it’s Candace Hill. At 16, her potential is enormous and she is still learning the extent of her prodigious talent. In what is already shaping up to be a historic class of 2017, Hill’s achievements put her right at the top.”

Hill will begin her junior year of high school this fall. “Without question, Candace is deserving of recognition as the nation’s best high school girls track & field athlete based on her statistics on the track and the impact her accomplishments have had on Rockdale County’s success,” said Gatorade Chief Marketing Officer Morgan Flatley. “But she is also a shining example to peers and aspiring young athletes of what a leader and a student-athlete should be. She represents everything we hope for in a Gatorade Player of the Year recipient.”