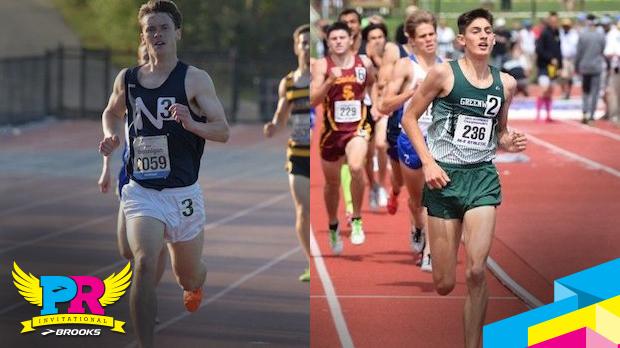 In our latest Brooks PR Match-Up, we breakdown the PR's and head to head outcomes between two of the fastest two milers in New York state history between senior Mikey Brannigan from Northport and Jeremy Spiezio from Greenwich Central.

Northport's Brannigan owns the New York state records in both the 3200 (8:42.92) and mile (4:03.18) as he currently leads the nation's at 3200 meters from his victory at the Loucks Games in early May, while ranked #4 in the mile from his third place showing in the Dream Mile.

Greenwich Central's Spiezio was the New York state champ last weekend in the 1600 in a 4:09.39 PR, but returns back to the two mile distance this weekend in Seattle after running a 8:46 3200 PR for fourth place in that incredibly deep 3200 meter race, which Brannigan won at the Loucks Games.

Brannigan has won three straight races against Spiezio in all of their head to head match-ups at the Loucks Games 3200, Penn Relays mile, and New York State Indoor Meet 3200. Spiezio's last win against Brannigan came in the Millrose Mile in early February and owned Brannigan in the previous two indoor races as well to make them tied at 3-3 for their six races against each other.

Only four seconds separated them at the Loucks Games 3200. Racing again at two miles in Brooks PR Invite this Saturday, can they both go under the New York state record in the two mile facing arguably one of the best and deepest fields ever assembled for the eight lap event?

Both Mikey Brannigan and Jeremy Spiezio will be competing at the Brooks PR Invitational in the boys two mile run on Saturday, June 20th in Seattle. Who will come out with the Fastest PR then? Watch LIVE on MileSplit and Flotrack on June 20th to find out!

Get hyped for 2015 Brooks PR Invite with last year's highlights!