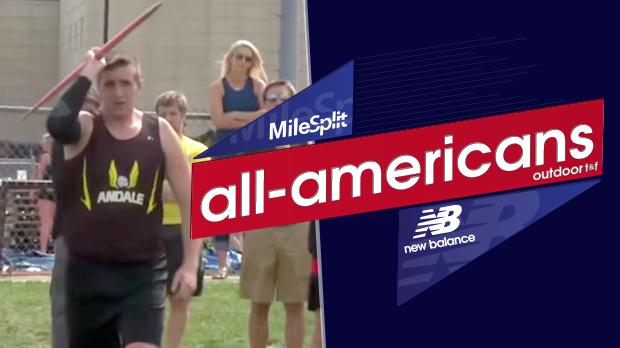 It was a huge mark and personal best at the time when Andale (KS) junior Jeff Ast threw for a US #1 distance of 222'6" in the javelin at his home invite on April, but he has shown since then with two more meets over 200 feet including a win at the Kansas Relays that the performance was no fluke. He is joined on the watch list by hims teammate Luke Walstad.

1. Jeff Ast (Andale, KS - Jr.) - US leader in the javelin, Ast had an unbelievable day over a month ago when he rocketed his personal best throw of 226'2" to take over the national leaderboard. Undefeated for the season, Ast aims to pick up his first Kansas state title this month (3rd at last year's meet) and potentially explore how he can match up in some elite post-season meets against country's best javelin throwers.

2. Michael Biddle (Williamsburg Community, PA - Sr.) - Pennsylvania is a tough and competitive state to be the best in the javelin, but Biddle has been a model of consistency with 5 straight meets throwing over 200 feet. The Penn Relays runner-up, Biddle has been on a tear ever since that loss with nearly 3 meets over 210 feet including a US #2 213'10" mark immediately after taking second at Penn.

3. Hudson Keffer (Central Kitsap, OR - Sr.) - Arguably the best javelin thrower out of the Northwest, Keffer is a 2014 Washington state runner-up in the event. He has throw over 200 feet in a handful of meets including a US #3 210'0" season best.

4. Nick Solfanelli (Scranton Prep, PA - Sr.) - Last year's New Balance Nationals runner-up, Solfanelli is looking to get back to his 2014 summer PR form of 214'8" and take over state bragging rights from Biddle who defeated him in their lone head to head at the Penn Relays.

5. Drew Hess (Wilson, PA - Sr.) - Since a 15th place finish in the javelin at the 2014 New Balance Nationals Outdoor, Hess has been undefeated and continuing to improve almost each meet to reach his most recent PR performance of 206'9" at his Pennsylvania district meet.

6. Ian Myers (Westview, OR - Sr.) - A major win for Myers at the Jesuit Twilight Relays held at the University of Oregon taking the javelin throw with a PR mark of 201'5".

7. Jackson Vanvuren (Faith Bible, OR - Sr.) - Defending Oregon 2 state champ Vanvuren has taken two runner-up finishes at Hayward Field this spring at the Oregon Relays and Jesuit Twilight Relays, but been knocking on the door of a 200 foot throw this season at 198'8" season best.

10. Mike Marsack (Stroudsburg, PA - Jr.) - One of four Pennsylvania javelin throwers on the watch list, Marsack recently went over 200 feet at his district meet building into this weekend's state championships, which should sort out who is the best in PA as well as help make the national rankings more accurate.