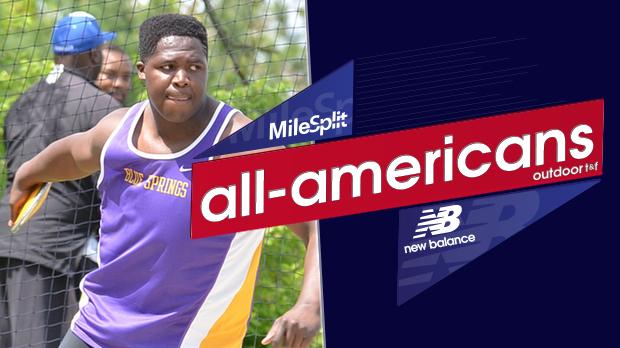 The top returnee from last year nationally in the discus remains on top this year as Carlos Davis from Blue Springs, Missouri will be heading into his final state championship meet in two weeks with the US #1 mark in the discus at 214'4".

1. Carlos Davis (Blue Springs, MO. - Sr) - Davis was coming back as the nation's top returnee in the discus after his 212'5" mark at last year's Missouri State Championships. He has already exceeded that performance with his state meet two weeks ago and remains US #1 in the event at a 214'4" season best with his twin brother Khalil also in the discussion and rankings among the nation's best.

2. Christian Smith (McDonald, OH - Sr.) - One of the top returnees from last year's New Balance Natioanls Outdoor when he placed 3rd in Greensboro, Smith has gone undefeated this spring with a season best mark of 203'9" and a handful of meets hovering well over 190 feet to showcase his consistency.

3. Trevor Detillion (Unioto, OH - Sr.) - The Penn Relays discus champ Detillion enjoyed a big day on that final April weekend at Franklin Field with his personal best mark of 203'6.50". The defending Ohio Division 2 state champ has primarily stayed in the 180+ foot range this season, but had his second best throw of 193'6".

4. David Lucas (Warwick, PA - Sr.) - Lucas was the Penn Relays runner-up last month with a personal best and US #4 mark of 199'7.50". He will be seeking his first Pennsylvania state title this weekend after a runner-up finish one year ago.

5. Khalil Davis (Blue Springs, MO - Sr.) - The twin of national leader Carlos Davis, Khalil is a great thrower in his own right, but rarely enjoys a first place finish thanks to his brother despite putting out plenty of big marks approaching 200 feet including a 199'0" PR this spring.

6. Mailk McMorris (Mater Dei, CA - Sr.) - The Arcadia Invitational champion, McMorris is the top returnee from last year's California State Championships when he finished 4th overall in the discus competition. Ranked US #7 with his Arcadia winning throw of 194'8".

8. Brett Neelly (Gallatin, TN - Sr.) - A two-time defending Tennessee state champion, Neelly has not taken a loss since a disappointing 15th place finish at last year's New Balance Outdoor Nationals. US #12 ranked in the event with a 192'2" season best throw this spring.

9. Willie Morrison (Leavenworth, KS - Sr.) - Not only a national champion shot put thrower, Morrison is also a reigning Kansas state champion in the discus and owns US #11 192'5" personal best in the event. A runner-up last summer in the AAU Olympic Games, Morrison has only taken runner-up once since at the Kansas Relays

10. Ryan Camp (Archer, GA - Jr.) - Only a junior, Ryan Camp crushed it all spring long in the discus down in Georgia without a single loss for the season and launching a personal best mark of 191'0". He is headed to Cuba next month to compete with other top high school stars at the Caribbean Scholastic Invite.