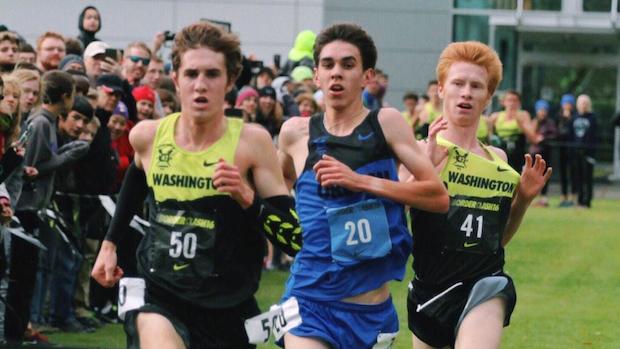 Unfortunately, they were not all going to be racing against each other in the same national championship race next month with US #3 Tanner Anderson competing in the Nike Cross Nationals with his team, while both US #4 Matthew Maton and US #7 John Dressel are going for individual glory at Foot Locker Nationals. So the Border Clash at Nike Headerquarters in Beaverton, Oregon on Sunday was to serve as the final gathering and matchup of the Northwest's very best in high school cross country.

Going into the race, Maton and Anderson agreed to make it a glorified tempo race to save themselves for more important races coming up in mind and thought Dressel had agreed to that plan as well to have the 3 national elite harriers finish together in a friendly race, but the competitive side and drive of Dressel appeared in the final straightaway to start his kick to the finish. Maton attempted to respond, but was too late with Dressel taking the win in 13:48 and Maton being held off in second place at 13:48.

The Washington state meet record holder Anderson, who crushed NXN Northwest last weekend in the snow, stayed to the original plan and had some fun with the finish in proudly displaying his state pride across his singlet in 3rd place with a time of 13:49 on the 4,387 meter course (2.72-2.73 miles) around the Nike campus grounds.

The Oregon state meet course record holder Maton was a bit miffed by Dressel's move in post-race comments, but the two will have the opportunity to battle it out 2 times over the next 3 weekends at the Foot Locker West Regional at Mt. SAC on December 6th and if both qualify at Foot Locker Nationals at Balboa Park on December 13th.

Meanwhile in the girls' race at the Border Clash, Ella Donaghu seems to run her best when the "Swoosh" sponsors the event as after winning the Nike Cross Nationals Northwest Regional title last weekend in a major upset over previous #1 ranked Allie Ostrander of Alaska, the Oregon state champ Donaghu of Grant High School won again at a Nike hosted meet to pull away from Washington state champ and fellow NXN individual qualifier Lindsay Bradley (US #12) of Richland High School for a 3 second victory in her final time of 15:47. The US #4 ranked Donaghu is looking more and more like not just one of the top contenders, but potentially the favorite for the individual title at NXN in two weeks. She finished 9th in last year's national race.

Team Washington was the clear cut superior state in both races over Team Oregon with a 20-37 advantage in the girls' race and 19-42 point win in the boys' race led by Dressel and Anderson.