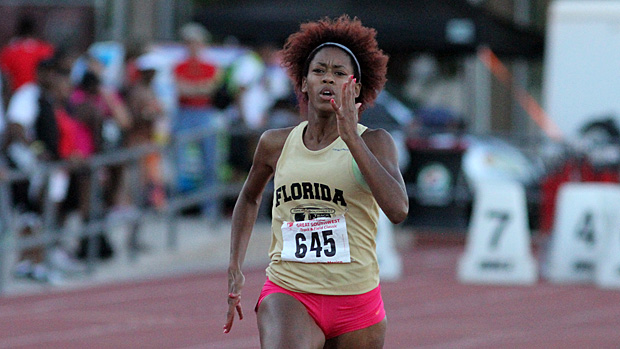 Diamond Spaulding kept things out of reach in the Great Southwest 200 at 23.00. Photos by Alan Versaw.

Each year, Great Southwest makes it a point to bring in some of the finest high school athletes in the country. Each year they get some stunning performances out of those athletes. But each year, there come some stunning surprises among the event winners. In that respect, this year was little different than the years that preceded it. But how those suprises come is always a story that must wait to be told.

Coming into Saturday's action, we had seen the multi event titles go according to form with Zack Bornstein, Ashlee Moore, and Morgan Griffiths taking home first place medals, but not necessarily by the road expected. We had seen the steeplechase titles go most unexpectedly to the state of New Mexico, and we watched as Michael Yow and Haley Showalter did more or less what everyone had anticipated in the hammer throw. It was the kind of script that Saturday followed.

The first event of Saturday's concluding day was the boys javelin. A major showdown between Beau Clafton of New Mexico and Andrew Henn of Kansas loomed. But, wind--and perhaps a bit of rustiness--had their roles to play in the outcome. The throws that many expected to reach well beyond 200 feet kept drifting right and short due to the persistent east winds throughout the competition But Henn's throws pierced the wind best of all, reaching to 59.69m (195-10). While there were no 200-foot throws, neither was there a rival to the throne. Henn's series dominated the competition and beat the field by more than six feet.

The outcome of the girls javelin was slightly more of a surprise, but completed a Kansas sweep of the javelin events. The girls, too, battle the persistent crosswind, and Kansas Keiryn Swenson pieced together another consistent series that would upset favored throwers like Katelyn Gochenour and Chrissy Glasmann. Swenson's 149-6 would come within six feet of her season-best mark, considerably closer than Gochenour or Glasmann would achieve in the crosswind. Potentially, the trio could be back next year for a rematch as none of the three have used up their high school eligibility. 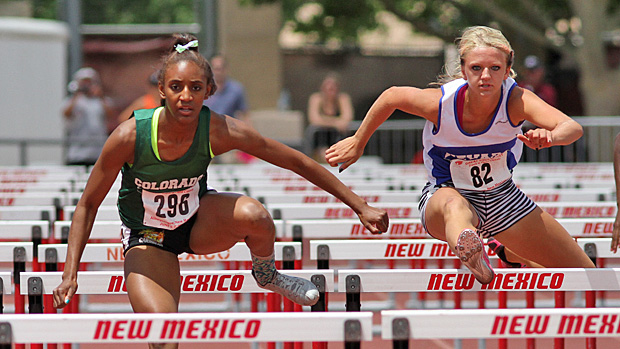 The girls 100 hurdles figured to be a battle of Dior Hall against the clock. It was a battle, to be sure, but it turned out that Hall had a couple of more pressing concerns than the clock. The wind had turned a little in time for the event, and the contestants faced a bit of a headwind, nullifying the chance of as US #1 AT run. That much was evident before the gun went off. What wasn't evident before the gun went off was the nature of the challenge Dior Hall would face from Tiana Bonds. Bonds has, shall we say, a low wind profile and a big heart. Both were completely in play as the Nevada state champion chased Hall all the way to finish line (photo, above) before succumbing, 13.42 to 13.52 (-1.0). For Hall, that kind of time is just another day at the office. For Bonds, it was a PR of almost a quarter of a second and a serving of notice that hers is officially on the short list of short names at the top of the world of US high school hurdlers.

Any doubt about Bonds' status among US high school hurdlers was vaporized later in the day when, following two days of grueling heptathlon competition, Bonds refused to fold to the higher seeds in the 300 hurdles. Bonds closed out her weekend with a screaming mark of 40.90 in the 300 hurdles and the event title that had eluded her best efforts all weekend long.

Aside from Bonds' big race in the 300 hurdles, events on the track went mostly as expected. Mikah Brisco and Andre Ewers came from the heat and humidity of Louisiana and Florida, respectively, to the dry heat and thin air of New Mexico and won convincingly in the elite 100s. The southeast produced another pair of winners in the 200 elites as Terrell Smith of Mississippi and Diamond Spaulding of Florida took top honors in the deuce at 20.82 and 23.00, though neither effort was quite wind legal.

The first, and only, sprint to go the way of one of the states actually included in the Great Southwest logo was the boys 400, where Nevada's Sebastian Feyersinger stepped up and delivered a 47.01. The girls 400 winner, however, was back to the familiar gold singlets with black lettering of Florida--Kendall Ellis took the win in 53.49.

The large Missouri contingent flexed its muscle a little when Charles Jones went straight to the front of the field and went wire-to-wire with the lead, stopping the clock at 1:51.24. A few minutes earlier, Sarah Feeny of Utah had done very much the same with the girls 800 field. Only, in Feeny's case, her time of 2:09.83 established a new meet record.

For Utah, the win in the girls 800 came as a small bit of redemption after a surprising loss in the mile. Utah's Lucy Biles and Nevada's Sydney Badger seemed  positioned to run away with the mile title through the first couple of laps, but there was danger on their heels. First Badger, then Biles fell from the lead group and Montana's Christina Aragon mounted a furious surge on the final lap. Aragon would go on for a 4:56.69 mile (not a 1600) at altitude, and Colorado's Tabor Scholl would end up slipping by Biles for second.

The boys mile proved to be a case of "know thy opponent." Missouri sophomore Dylan Quisenberry surprised a pack of Utah and Nevada contenders with an overpowering finishing kick to take the boys mile in 4:20.11. It didn't match his season-best time, but that 4:11 wasn't run at 5000 feet of elevation, nor was it run in the desert heat.

The 3200s went the way of a pair of young and relatively low-profile (to date) runners. Nevada's Kyra Hunsberger waited patiently for a mile before working over the field on the second half of the race. Hunsberger's time of 11:12.29 was an altitude PR for the Nevada freshman, though she has run faster than that on several occasions in the thicker air of California. Utah sophomore Garek Bielaczyz waited until the final couple of laps to put his decisive move on Kai Benedict to win the boys 3200. Bielaczyz's winning 9:35.73 wasn't a PR time, but neither was it far from his best mark.

The boys 300 hurdles proved to be yet another showcase for Arizona senior Robert Grant. Grant turned up another sub-37 mark with his winning time of 36.74. Texas sophomore Norman Grimes was a half-second back in second.

The field events, perhaps owing to their more technical nature held a few more surprises than the track events. 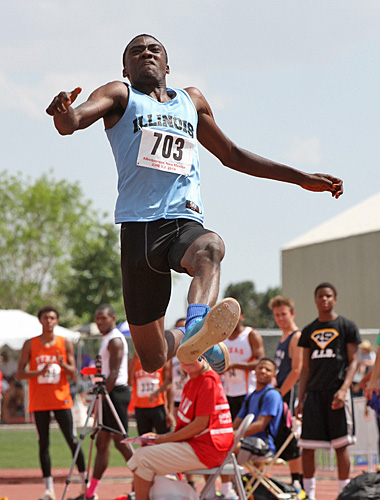 Two field events that didn't hold any surprises, however, were the girls long jump and girls triple jump. Though both Chyna Ries and Keturah Orji came up a little shy of PR kind of marks, both did what they were supposed to do and won their specialty events. Ries's winning jump measured 20-2.5, while Orji's meaured a meet record 43-9.75.

Surprises were thin in the boys triple jump as well, as KeAndre Bates of Texas revisited the land beyond 50 feet at 50-9.5. The boys long jump was another story, however. There were several seconds of whooping and hollering among the fans gathered next to the long jump pit when Illinois' Jamari Ward (photo, left) stuck his 25-6.75 (+2.2) into the sand of the pit. Although that jump came early in the competition, nobody else came close through all of the remaining attempts. KeAndre Bates was more than a foot back in second.

The girls pole vault saw a couple of notable scratches from the field, leaving things wide open for Nicole Summersett of Texas to take the win at 12-11.5. Paulo Benavides of Texas prevailed over Tommy Dial of Oklahoma in their duel into the waning light of the boys pole vault. Benavides would eventually take the win at 17-1.

Kord Ferguson of Kansas nailed a double on day, winning the boys discus at 196-2 and the shot put at 63-7. Both were well short of PR marks for Ferguson, but showing up and being consistent about your throws will eventually win you more meets than worrying about the PR mark every week. Amarissa Hawker of Utah surprised a few folks en route to winning the girls shot put at 43-7.25, and Missouri's Sophia Rivera staged a mild upset in winning the discus at 142-8. The shifting winds proved to be a puzzle for discus throwers of both genders.

In the high jumps, Utah's Britten Duerden extended her domain in the high jump from state of Utah to Great Southwest, winning on misses at 5-8. And KeAndre Bates made his case as the best all-around jumper at the meet, winning the boys high jump at 6-8.75. When you come home from Great Southwest with two firsts and a second, it was a very good day. Look for Bates' name in more big-meet kind of competition later this summer.