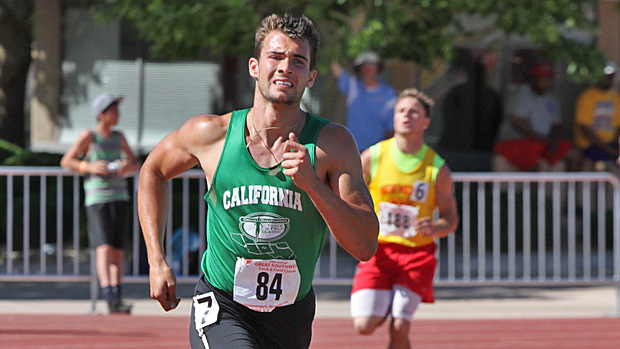 Zack Bornstein finds the will to close hard on the final straightaway of the decathlon 1500. Photo by Alan Versaw.

There's a lot you can do in 4.74 seconds. And one of the things you can do, at least if your name is Zack Bornstein, is you can come back from a 23-point deficit and win the Great Southwest decathlon.

Things were not looking good for Bornstein going into the final events of the Great Southwest decathlon. After building a seemingly insurmountable lead on the discus where Bornstein threw 155-4 and gained a minimum of 206 points on the entire field, his decathlon triumph story started to unravel.

And, suddenly the lead the seemed untouchable evaporated. Bornstein's zero points in the pole vault gave Wyatt French an enormous opportunity. French went 12-10.75 in the pole vault, collected 598 points, and found himself the surprise leader with only two events remaining. With relatively modest discus throws and pole vaults, Thursday's second and third, Trevor Bursach and Jerrick Powell had dropped out of serious title contention.

With only the javelin and the 1500 remaining, French seemed nicely positioned to win it all. French's 73-point lead wasn't the stuff of legend, but Bornstein was clinging by a thread, and the rest of the field was a couple hundred or more points back.

On the javelin apron, Bornstein gained 50 of those 73 points back with a throw of 139-2, almost 12 feet better than French. But, the 1500 loomed ahead. And the 1500 meant extensive use of the same hamstring muscles that had been the topic of Bornstein's earlier visit to the trainer's table. There weren't a lot of people in the stadium figuring that he would be able to pull this one of.

What few believers there were in Bornstein's corner had the wind taken out of their sails when Bornstein lagged far behind the field on the first lap of the 1500. The scene had every appearance of Bornstein limping his way home.

But, what happens in one lap isn't necessarily what happens in 3.75 laps. Quietly, Bornstein began working his way up through the field. First one pass, then a long wait, then another. On the final lap, Bornstein made the critical pass that put him in front of French. But with the supply of track left until the finish line running alarmingly low, and French's 23-point lead in view, it seemed a case of too little, too late.

Somebody, however, forgot to tell Bornstein the too little, too late part. Bornstein pushed stubbornly ahead, hoping against all hope he could put adequate distance between himself and French to make a difference.

In the end, Bornstein put 4.74 seconds between himself and the leader. And those 4.74 seconds spelled 26 points of difference, enough to Bornstein a three-point margin of victory. His decathlon was not the 7000+ effort he came into the meet seeking, but sometimes the will to win has little to do with PRs or lofty round  numbers. For 2014, Bornstein would be the Great Southwest decathlon champion. And the way he won probably revealed a lot more of the character of a champion than if he had cleared anything close to his typical 13-ish feet in the pole vault.

The 1500 of the decathlon aways comes with a heavy load of fatigue. That much is non-negotiable. It doesn't always come, however, with triple digits of temperature and every reason to write a concession speech and call it a good effort than ended in failure. If Bornstein ever finds himself looking for reasons later in life not to give in when circumstances seem hopeless, this surely will provide good evidence that it's worth staying the course.

Interestingly, the girls decathlon ended with a change of lead on the 1500 meters as well. Morgan Hartsell came into the final event nursing a 45-point lead over second-place Morgan Griffiths. And, if we were to take a look at the hometowns of these two individuals, it would appear Hartsell came into the 1500 with something of an alitude advantage over Griffiths. Lubbock is a whole lot closer to the altitude of Albuquerque than St. Louis.

But, nine events and sweltering track temperatures have a way of playing games with what would otherwise seem to be advantages. Though clearly laboring through the final two laps of the 1500, Griffiths somehow found the will and the reserves to maintain her pace and build a substantial lead on Hartsell. Nearly 31 seconds of difference on the clock meant 145 points of difference on the board, giving Griffiths a deceptively large margin of victory.

In the eighth and ninth events, the shot put and high jump, Hartsell had overtaken Griffiths and seemed to have her Missouri challenger on the ropes. But you never count on anything in the decathlon until the 1500 is over.

The one multi-event winner to take a lead into the final event of the day and then hold that lead--though not the full margin of the lead--through that event was Ashlee Moore of Arizona. The Oregon-bound senior ended her day with very nice total of 5311 points. Right behind her, however, was an Arizona-bound senior out of Nevada, Tiana Bonds. Bonds' total of 5258 gave the pair the top two heptathlon scores in the nation for the 2014 season to date.

Bonds came up biggest in the 100 hurdles, 200, and 800, but Moore was able to hold her off with a slightly more event set of scores across the ten events. Ultimately, the 146 points Moore gained on Bonds in the long jump were telling, as the long jump is a strong event for both, but Moore's went a full meter farther than Bonds to provide well over the final margin of victory.

The only other individual events of the day were the hammer throw and steeplechase.

The boys hammer throw was already in hand when Michael Yow stepped into the ring for his final toss, but the 187-7 he threw on that final turn in the ring added a definite note of finality to the event standings.

More fireworks were on their way for the girls hammer throw. At almost exactly the same moment that Zack Bornstein was completing his remarkable comeback in the decathlon 1500, Haley Showalter was smashing the old Great Southwest meet record in the hammer throw. In fact, at least five, and maybe all six, of Showalter's throws broke the existing meet record of 179-11, but the one that goes into the books is her 58.92m mark (193-4) that came on her third throw of the series. The only doubt about the sixth, and final, throw breaking the record would be on account of the fact that Showalter stepped out of the front of the ring, knowing that her final throw was not the longest of her series.

And, remarkably, even though Showalter has shown well with PRs at a couple of college meets this spring, all six of her thows were PRs as well. Showalter conceded of her biggest throw of the day, "I couldn't tell if it was a PR throw, but it's hard to tell from where you stand in the ring."

What wasn't in doubt was that a little extra time lately to work on her throwing technique has been paying off, "We've been practicing a lot since school got out, and it [my hammer throw] has been coming along." Indeed it has. If things go well, what we saw today at Great Southwest may be little more than a harbinger of bigger things to come.

The girls 2000 steeple became something of a battle of attrition as most of the field got a whole lot wetter at the water jump than the design of the event demands. After two laps of repeated plunging into the water, a trio of New Mexico girls took control of the race. Carisma Lovato would end up with the win at 7:33.09, with sisters Crissey and Cassey Amberg nailing down second and third places.

New Mexico also prevailed in the boys steeple, though it took a bit of clandesting work to get it done. Perhaps sensing that the steeple figured to be dominated by Utah runners, Alex Heffelfinger showed up in a Utah singlet and proceeded to outdo the Utah masses. Heffelfinger held off Utah's Braedin Butler through the entire final lap for a three-second margin of victory in 6:19.04. Winning on the UNM track has become something of a habit recently for the East Mountain sophomore who swept the 2A 800 and 1600 at the New Mexico state meet just one month ago.