Watch Anna Maxwell run a US #1 4:43.27 mile at Stanford Invitational below! 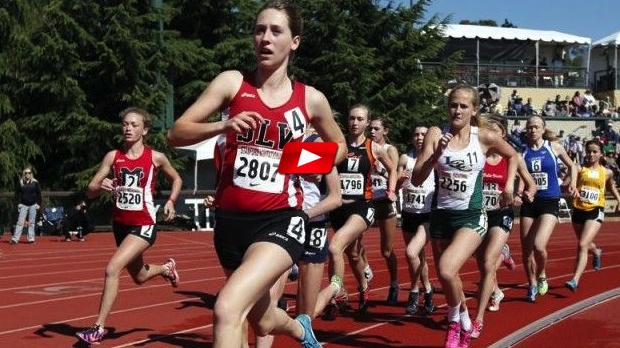 Several US #1 performances were produced at the Stanford Invitational's high school portion of the meet and maybe none more impressive than San Lorenzo Valley (CA) senior Anna Maxwell blowing out the the seeded girls mile field including the likes of 10:07 3200 runner Bethan Knights in a new US leading performance of 4:43.27. Maxwell had already shown early this outdoor season that she was fit enough to run such a time with a 2:09 800, 4:48 1600, and 10:11 3200 already under her belt over the last few weeks of racing. Her victory certainly positions herself well for an invitation for the adidas Dream Mile in mid-June.

The first of the US #1's came on Friday in the distance medley relay with two teams pressing each other to the final stide between the Henry M. Gunn girls and Davis girls with their anchor legs Sarah Robinson (Gunn HS) and Fiona O'Keeffe (Davis HS) trading leads on the final lap before Robinson regained first in the final push to the line for a US #1 11:56.68 victory for her team, while O'Keefe splitting 4:47 for 1600 meter anchor leg (as did Robinson) helping her team to a US #2 time of 11:56.90 for second place at Stanford University.

The second US #1 from day one competition came in the girls 400 meter hurdles with Hannah Chen of Los Gatos able to withstand a challenge from Maya Miklos of Gunn High School (2nd, 1:01.63) to run a lifetime best of 1:01.19 in the event. Chen was coming off a recent 43.49 PR in the 300 meter hurdles at the St. Francis Invite on March 15th and last spring was a qualifier for the California State Meet in the 300 hurdles.

Reno Tuufuli of Liberty High School in Nevada, was recently ranked #3 on the MileSplit All-American Watch List on the boys discus throw. If he keeps up the level of performance as shown in Palo Alto this past weekend, Tuufuli may just find himself ranked #1 on the next watch list a month from now. There is no disputing his current US #1 ranking by mark with a throw of 196'10" at the Stanford Invite to move him to the top of the national leaderboard in the event.

Meanwhile, Nate Moore of Castro Valley (CA) High School, won two national titles indoors in the long jump and triple jump to give himself two legs to stand on as the nation's #1 ranked in the MileSplit All-American Watch List for both events starting this outdoor season. Moore did not let us down on giving him that ranking at the Stanford Invitational as he edged just ahead of Texas Relays champion Keandre Bates on the national rankings list by a half inch with a wind legal US #1 mark of 50'4.50" in the triple jump. Moore is searching for his first jump in the 51 to 52 foot range after topping out at 50'11.50" in a California state championship last June. Moore also won the long jump at the Stanford Invite with a US #4 mark of 24'5".

More to come from Palo Alto. Check out all of our race footage, photos, and highlights below from the Stanford Invitational!

A girls distance medley relay with a close 1-2 finish producing the top two times in the country in the race by the winners from Henry M. Gunn High School at 11:56.68 and the Davis Senior girls as close runners-up at 11:56.90 highlighted Friday's high school events action at the Stanford Invitational to build into the final competition on Saturday

One of the top meets nationally this weekend will be at the Stanford Invitational with outstanding high school fields assembled in Palo Alto, California. MileSplit will have race video coverage of the high school events posted after the event on the meet page, while live stream coverage will be carried on Flotrack.