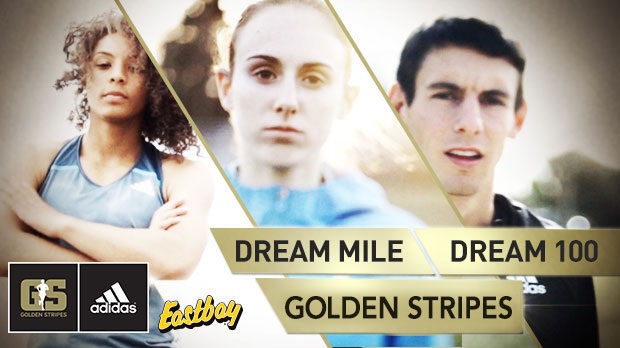 The adidas Golden Stripes Tour is the premier high school track and field series in the country. It consists of the adidas Meet of Champions, Kansas Relays, Golden South Classic and Dream Mile & 100 (adidas Grand Prix). This series has transformed the concept of fast and served as the platform for more than 30,000 athletes to #makehistory since 2010. From Southern California to the Great Plains, from the Everglades to the Big Apple, aGS has inspired athletes to reach heights never thought possible.

Athletes hoping to qualify for the Dream 100 or Dream Mile can in one of two ways:

Win one of the three Golden Stripes qualifiers:

Receive an at-large bid based on PR’s, US Rankings**, scope of work (100-400 and 800-3200) and quality of win (who have you beat, who have you been beat by and how have you done against national caliber competition)

With only nine spots in the Dream 100 and 14 in the Dream Mile, space is limited. So mark your calendars, lace up your spikes and dream big.

A list of current accepted invites and athletes on the watch list as potential entrants for the Dream 100 and Dream Mile can be found here.

**100m NWI times will not be considered for national ranking