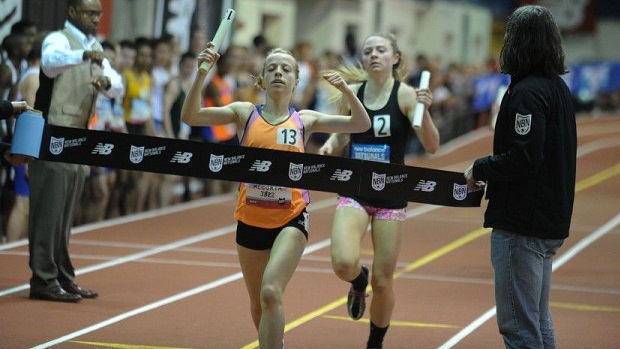 The footsteps were there, and West Springfield anchor Caroline Alcorta knew they weren’t going away. In fact, they were getting closer.

Despite the efforts of some heavy-hitting 1,600-meter anchors, Alcorta and her Virginia teammates held the lead and ruled the day in the girls’ distance medley relay. They covered the 4,000 meters in a new US#1 time of 11 minutes, 43.39 seconds.

“I didn’t want to take any chances,” Alcorta said of possibly backing off her fast pace that moved her through 800 in 2:17. “I knew if I slowed down, I would probably slow down too much. I didn’t want to lose momentum.

“Even though I was going out fast, I didn’t feel the burn quite yet. (It was a) might as well keep going kind of thing.” 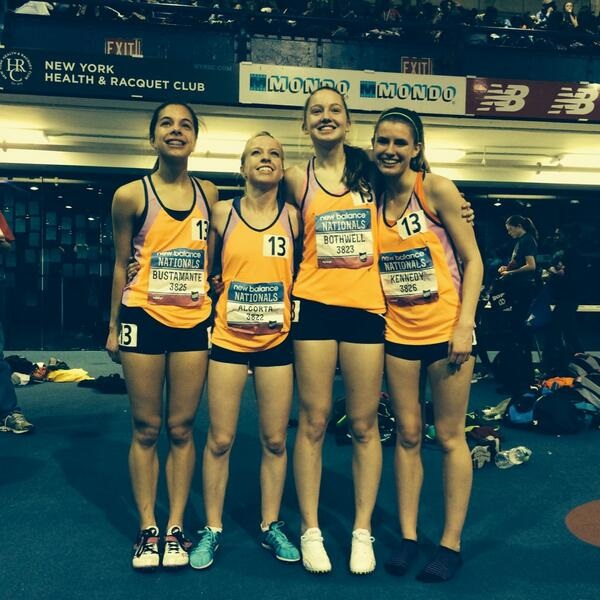 “I was so anxious,” Alcorta said of her emotions prior to getting the baton. “They got us in perfect position. Right in the front. I can do this.

“I was counting where each team was. It sounds more analytical than it probably should when you are about to race. I was worrying about that.”

Putting the pressure on West Springfield during the final eight laps were Haddonfield, N.J., and Staples, Conn., and their anchors, freshman Brianna Gess and sophomore Hannah Debalsi. All three anchors earned All-American honors in cross country last fall, and all were moving fast on the banked oval.

“I had to. I had to do this for my team so maybe I went out too fast but it all worked out in the end.”

Debalsi put Staples into second with about 600 meters left, but she was not able to hold the position. Gess and her 4:48.64 leg lifted Haddonfield to the runner-up spot and painstakingly close to the winners, covering the four legs in 11:43.94 compared to Staples and its 11:45.79.

Last year’s champion Benjamin Cardozo of New York sliced a little more than 10 seconds off its 2014 best to finish fourth in 11:52.07. The top four teams all moved to the top of the DMR yearly list.