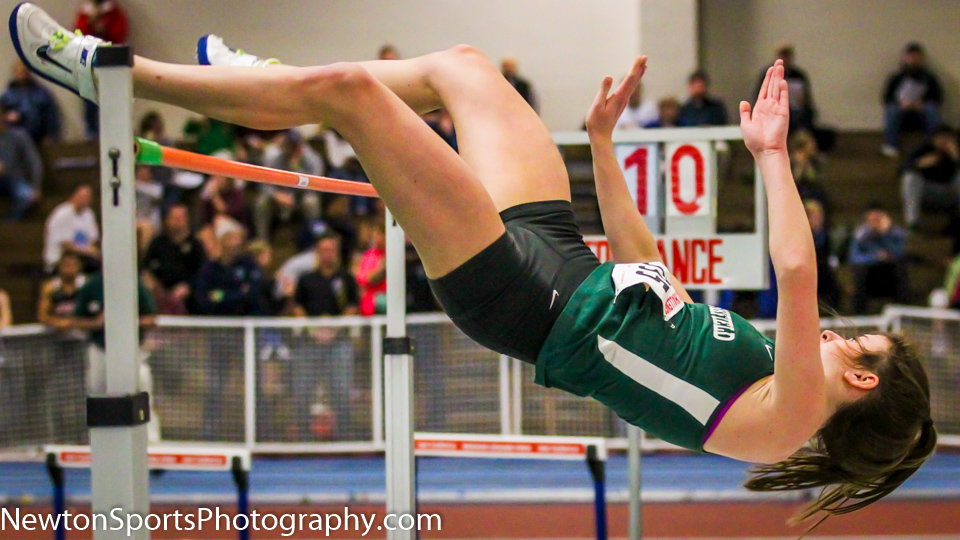 After competing at last year's New Balance Indoor Nationals in the emerging elite division (she won with a clearance of 5'7.25"), despite having a season best of 5'8" in the event, Marshfield (MA) senior Ellen DiPietro will have no problem being placed and electing to compete in the championship division this March at the Armory for the indoor national meet. Two weeks ago at the Boston Holiday Challenge at the Reggie Lewis Center, last spring's New England Championship high jump winner and Massachusetts All-State champion in the event was able to successfully clear 5'10" for the first time ever and elevate herself to a sole possession of the US #1 ranking in the girls' high jump.

The Michigan State University recruit, who also is a respectable hurdler (8.41 best in 55H & 15.10 best in 100H) has been a consistent performer over 5'6" since the tail end of her junior season of indoor trackand was finally rewarded for her steady showings with a breakthrough performance on December 28th in Boston. MileSplit US interviewed DiPietro a week after her she got the chance to let her 5'10" national leading performance sink in and now turn her attention to ultimately competing for a national title and end the season as US #1.

MileSplit US: This past weekend, you cleared 5'10" for the first time after clearing 5'8" twice last year as a junior. What was the difference for you to finally get over that bar cleanly at 5'10"?
Ellen DiPietro: I think I am stronger than last year and i'm starting to get really comfortable with my technique and my mark.
MileSplit US: Clearing 5'10" on your final attempt on Saturday at the Boston Holiday Challenge, what was your reaction and emotions when you realized you had done it?
DiPietro: I'm usually pretty calm after a big jump but I was definitely excited after both 5'9" and 5'10" jumps. I was a little bit surprised considering how early in the year it was.
MileSplit US: What was the closest that you had ever come to clearing 5'10" before. Did you have any close calls in clearing 5'10" in previous seasons?
DiPietro: I've never attempted 5'10" before but I have attempted 5'9" and have been close a few times. 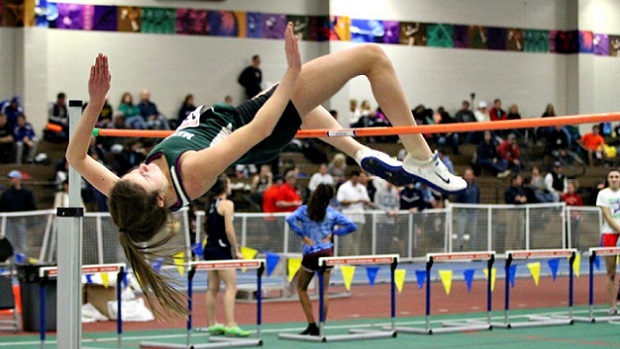 MileSplit US: You are the only girl in the nation that has cleared over 5'10" in the high jump so far this track season. What does that mean to you to know that you currently are ranked #1 in the nation in the high jump?
DiPietro: Being #1 in the nation is hard to believe, I still don't feel like I am. There is still a long way to go in the season and I think I'm going to have to go higher to maintain that spot.
MileSplit US: What was your athletic background growing up as a youth?
DiPietro: I was mainly a basketball player and a cheerleader throughout my youth. I gave up both sophomore year to focus on track.
MileSplit US: How did you first get involved with track & field? What drew you to compete in the high jump specifically?
DiPietro: I decided to go out in the spring of my freshmen year just for something to do. I was tall and athletic so Coach Ryan thought I should give high jump a try.
MileSplit US: At last year's New Balance Indoor Nationals, you actually won the emerging elite division in the high jump at a height of 5'7.25", which would have placed you 3rd and earned All-American honors if you had competed in the championship division. You were probably happy that you won the emerging elite division, but were you also kinda miffed or wished you had been placed in the championship division to compete for that All-American honor?
DiPietro: We talked about this a lot whether I should jump elite or emerging elite. At the time I was inconsistent with my jumping, I would have one good meet and the next not so good. I was also there with my 4x400 relay team and the elite division was around the same time as the relay. I didn't want to leave my teammates behind so I jumped emerging elite.  I was happy that I won emerging elite and got to run with my team, so I wasn't that upset I didn't jump championship. But this year I will be jumping championship elite.
MileSplit US: You seemed to use that indoor national performance to springboard to a strong spring winning the Massacusetts All-State title and New England Championships in the high jump on consecutive weekends to end the season. What did winning those first titles at those two major championship meets mean to you?
DiPietro: I hadn't had much success at an All-State meet before so to finally break through I felt as if a lot of the pressure had went away. Going into New England's the following week I felt like I had a really good chance at winning the meet. It felt great to finally be an overall state champion as well as the New England champion.
MileSplit US: What does a high jumper like yourself do to stay in shape and get yourself ready to compete well at the indoor season during the long offseason break in the summer and fall?
DiPietro: Typically I don't do any jumping at all in the summer and fall. It's all strength and conditioning leading up to indoor season. 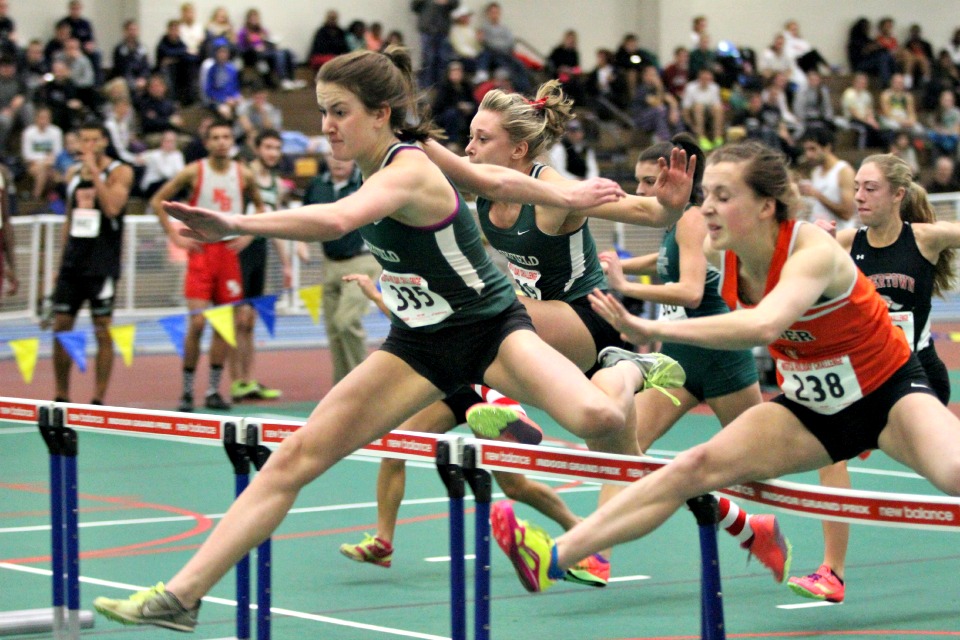 MileSplit US: Not only are you a high jumper, but also hurdle as arguably your second best track & field event and have worked your 55 hurdles time down to 8.41 and also won last weekend at the Boston Holiday Challenge. Both high jump and hurdles are technical events, so what similarities do you notice in preparing, training, and competing between each of those events?
DiPietro: Both events require a lot of power and technique. To succeed in both it's important to make sure the form is consistent. Hurdles require much more speed than high jump so at practice I still work on my speed as well as my form. I think I've become a better high jumper because of the hurdles.

MileSplit US: Does keeping yourself busy going back and forth sometimes in between high jump attempts to your hurdle races and other events on track help or hinder your performances?
DiPietro: Going back and forth between both events at times can be a little stressful especially at bigger meets. After three years now I've gotten used to it and I think I'm more prepared now than I was in the past.
MileSplit US: You compete often at the Reggie Lewis Center for meets during the winter, which is one of the nation's best indoor facilities. What do you enjoy most about the Reggie Lewis Center?
DiPietro: What I like most about the Reggie Lewis Center is that I'm really comfortable competing there. It's nice being familiar with all the officials and I love running and jumping on the surface.
MileSplit US: You have already committed to Michigan State Univrsity. What made you decide to compete collegiately for the Spartans?
DiPietro: The opportunity to compete in the Big 10 was very appealing to me. I visited MSU twice and I loved everything about the school. I was very comfortable with Coach Creekmur who recruited me and I knew early on Michigan State was a place I could be happy attending.
MileSplit US: Beyond the US #1 and personal best 5-10 clearance last weekend, what has been your favorite high school track & field memory or moment so far?
DiPietro: My favorite memory so far would have to be finally winning my first All-State title outdoors. Up to that point I had won four class titles so to add a state title to those it was a great moment.
MileSplit US: Do you think you might be good enough now to get in that championship division of the high jump this year at New Balance Indoor Nationals (sarcasm)? Does your recent breakthrough at 5'10" give you confidence or think more seriously about competing for a national title this year?
DiPietro: Going back to the last month of outdoors last year, I haven't jumped worse than 5'6" including this indoor season so far. That consistency that I'm showing does give me a lot of confidence. If I can stay healthy I'll be at the Armory in March competing for the national high jump title.
More on Ellen DiPietro: