To say that the boys’ championship race at the 2013 Foot Locker National Finals was closely contested would be an understatement … to say the least.

A tightly grouped pack late into the race was a hint, and a 1-10 spread that has been bettered only a handful of times in the event’s 35 years was further proof. Neither, however, could hold a candle to the lead changes and bumps and ’bows that the top duo utilized to gain any slight edge possible during a spirited drive for the finish.

In a battle of juniors, Grant Fisher of Michigan had the final say, crossing the line in 15 minutes, 7 seconds for a three-second victory over John Dressel. The slight edge by Fisher was one of the closest finishes since Balboa Park 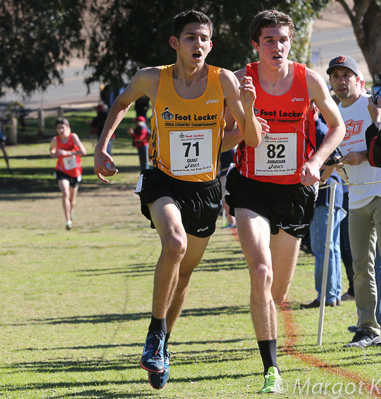 “It means everything,” Fisher said of his national championship victory. “Everything through the summer and even last year, all the workouts, I feel like they’ve all led up to this.

“It’s a great feeling thinking that it’s all been worth it. At the beginning of the season, I wanted to say that I gave everything I could. I think I can say that today, and I’m really happy.”

The opening half-mile in Saturday’s final race was covered in 2:18 as Patrick Sheehan of North Carolina led by a few strides. The entire 40-runner field was only separated by about three seconds at this point of the 5,000-meter race, with a pair of regional champions in Tennessee’s Aaron Templeton and Oregon’s Matthew Maton near the head of the pack.

Fisher put his No. 71 into view as the field crossed a road to contest the other half of the figure-8 layout.

“The first mile was definitely conservative,” Fisher said of the 4:53 pace. “You could tell everyone was pretty fresh. No one really wanted to go and make a move.”

West teamates Joseph Hardy of Seattle and Maton joined Fisher in front as the field began their second tour of Balboa Park. A loop around the dog park changed nothing up front as the lead group numbered eight, including Northeast champion Mickey Burke of Henrietta, N.Y., and Blair Hurlock of the host state.

“Everyone was kind of antsy, (and) the second mile was kind of the same,” the champion said. “It picked up a little bit. And then the third mile everything started opening up.”

Sparked by Hurlock’s surge into the lead, the two-mile mark was reached by the leaders in 9:53. The front group was now down to about a half dozen as Fisher grabbed a share of the lead.

Dressel moved toward the front at the bottom of lone major uphill on the course. He didn’t wait long to strike, charging to put a gap on the field as they continued the climb.

“Dressel made a big move up the hill, and it was tough to cover,” Fisher said of the pace being kicked up a notch or two. “Everyone was kind of scrambling up. I made up a little bit of ground on him, but he still had a lead. I tried to recover on the downhill a bit.”

Fisher was able to respond to Dressel’s push the best, with Maton only a few meters back in third.

“I was just trying to run really hard,” Dressel said. “I was focused on getting that first-place finish. I wasn’t really sure how fast Grant was with his leg speed. We both fought a great race tow 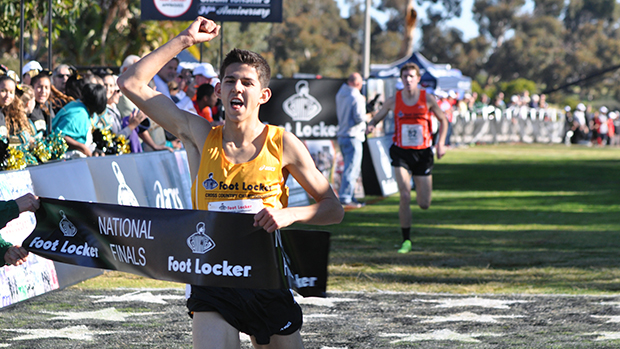 On the major downhill alongside Upas Street, Fisher let gravity move him along and he rocketed past Dressel and into the lead. The true battle was about to begin as Dressel responded on a slight uphill, pulling to Fisher’s shoulder as bumps occurred.

“It got a little physical, but that’s just the nature of cross country,” Dressel said. “It’s expected, I guess.”

A junior from Colbert, Wash., Dressel put together what turned out to be his final charge, retaking the No. 1 position as the leaders crossed the road just behind the starting boxes. Fisher quickly countered the move with one of his own as the leaders bumped for a final time before the Michigan runner was uncontested to the finish line.

“It did stop my momentum quite a bit,” Dressel said of the final physical contact he had with Fisher. “And once I got bumped, you can’t really do much from there. You just kind of have a (bad) feeling, but then you still have to execute and finish hard no matter what. It’s Foot Locker Nationals. Just to give it your all is all I can ask for.”

In summing up the hectic run for the laurel wreath and platter, Fisher described the end of the race as if it were a boxing match.

“We were kind of duking it out the last 400 meters coming in,” the winner said. “He’s a really tough guy, and we were switching the lead back and forth. Coming into the final stretch, he had me going across the road and we both kind of saw the finish line and went all-out, mad dash to the finish.”

To confirm the competitiveness of this year’s field, the 23-second spread from the champion to Holt-Andrews has only been bettered eight times in the event’s history. In another break from the norm, juniors had a great deal of success and monopolized the top of the results sheet. The leading trio still has another year of high school running, along with eight of the top 13.

23 was also the total score for the victorious West team.