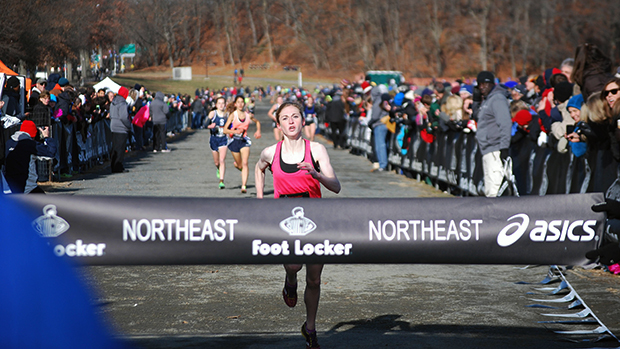 Nationally ranked heading into the Foot Locker Northeast Regional in New York City, Tessa Barrett had few external forces to move her along during a thus-far undefeated 2013 harrier campaign.

The senior from Waverly, Pa., received a “competitive nudge” Saturday from another member of the Saucony Elite 50 and closed out the 5,000-meter test as she has all season, reaching the finish line first to reserve her spot in the National Finals in San Diego in two weeks.

“I really held on at the end,” said Barrett, whose winning time of 17 minutes, 32.3 seconds was the fastest in the event’s past five years. “I was kind of spent after the hills. I just wanted to see what I could do. I’m so glad I qualified.”

Comfortable as always in the lead, Barrett had at least a five-second cushion after the opening mile-plus as the field left the spectators behind and headed out to conquer the Back Hills of Van Cortlandt Park. The Penn State commit maintained her front-running position after all the up and down hills were completed but did have company before the field of 107 turned its focus toward the finish line.

Hannah DeBalsi of Westport, Conn., moved up from the No. 8 position at the initial bridge crossing to the closest pursuer ahead of 2012 National Finalist Anoush Shehadeh of Larchmont, N.Y., and Brianna Schwartz of Pittsburgh. The sophomore cut into Barrett’s lead and was in place to challenge her winning streak as the leaders were back on the flats of Van Cortlandt Park. 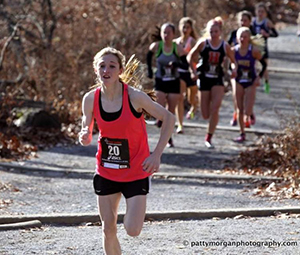 “We came back across the bridge and I tried to catch her,” said DeBalsi, who is No. 6 in the national ranking. “We were dueling, and I died and I got caught by somebody else. I was hoping possibly to win, but I know I raced as hard as I could so I can’t be upset about anything.”

Shehadeh maintained her push during the final meters and claimed the runner-up medal in 17:37.3, moving up from fifth a year ago when she was a sophomore. DeBalsi crossed third in 17:39.4, while Schwartz claimed fourth in 17:42.8 ahead of the 17:43.2 performance by Haddonfield, N.J.’s Briana Gess, who is ranked 10th nationally as a freshman.

“When Hannah came up next to me, it was kind of good,” said Barrett, who was No. 9 in the latest national rankings. “I was slowing down anyway, and I knew I wanted to speed up. She kind of pushed me there. When I saw that (finishing) straight, I just started to push. 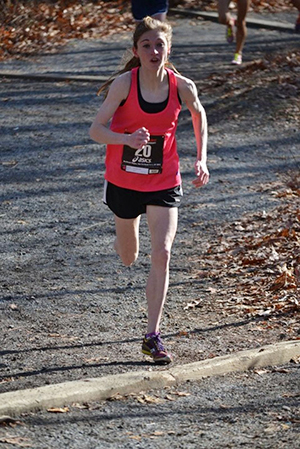 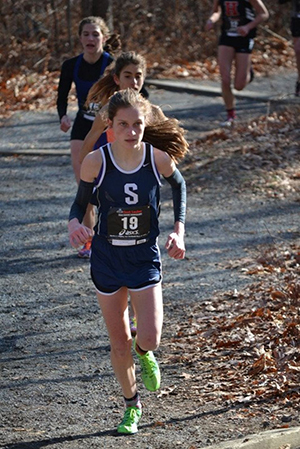 Saturday’s top 10 featured four seniors and included all four grade levels, with two from the other three grades. And led by Shehadeh in second, four are headed back to San Diego for a second consecutive year.

Sophomore Megan Reilly of Warwick, N.Y., is headed back to the national event after running 17:49.7 for sixth. The No. 11 runner in the Saucony listing was ninth in the 2012 event in the Bronx. 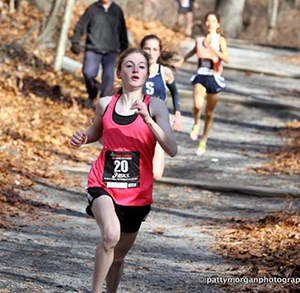 In looking ahead to San Diego and the race pitting 40 of the nation’s best cross country runners, Barrett has a goal in mind but some homework to do on the qualifiers from the other regions before the starting gun fires on December 14. 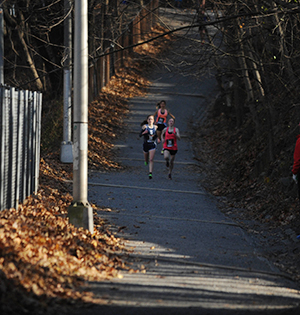 “I know there is great competition across the country now,” the Pennsylvanian said. “I’d love for a top 15 finish, but we’ll have to see.”