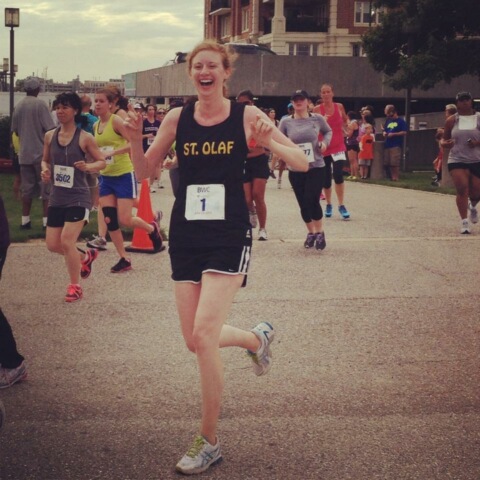 (Anne Dutton was involved in a serious accident on Sept. 22 when she was struck by a taxi cab while walking across a busy intersection in Baltimore, Maryland. The 24-year-old Iowa native, an avid runner, suffered multiple injuries and underwent 9-10 hours of surgery as a result of the accident. She was unable to walk without assistance for nearly three months. The following is an update on Dutton, who was featured in a Nov. 8 story on MileSplit titled, ‘Anne Dutton: A true survivor keeps on moving.’ This is a story about her triumphant recovery.)

Everyone has a different agenda when competing in a five-kilometer race.

For some, finally breaking the 20-minute barrier might suffice. For others like Anne Dutton, her primary goal at the Baltimore Women’s Classic on June 23 was simply to make it to the finish line.

The 24-year-old Dutton, a veteran runner with a high school and collegiate background, has finished plenty of 5K races throughout her young career. This one would be different, though.

Just nine months ago on Sept. 22, Dutton was on a road not too far away from the same one she ran in late June. But instead of running on that autumn morning, she was lying on the road immobile after being struck by a taxi cab while walking across an intersection to visit her brother, who was doing his residency at Johns Hopkins Hospital.

Dutton fractured the head of the humorous bone of her left arm as well as the left side of her pelvis due to the accident. She had a plate and seven pins inserted into her shoulder and her pelvis required an external fixator to stabilize it. During the recovery process, she spent most of her first three months requiring the assistance of either a walker or a wheelchair for mobility.

Medical personnel questioned whether or not Dutton would ever return back to running.

“I didn’t really have a sense on what to expect,” she recalled. “Doctors said some people with these types of injuries can go back to running and some can’t with the input of pins and everything.”

Dutton, who was training for a 10K race at the time of her accident, ignored the negative. By December, her recovery process took a big step forward when she was able to walk without assistance.

“I knew that was something important to me and something I needed to have a full recovery,” she said. “Doctors were very clear that (running) might not happen again. I was unsure and I was nervous to start again. I didn’t want to know it wasn’t going to be possible.”

Three months after that milestone, Dutton hit another one in mid-March when she ran for the first time since before the accident. 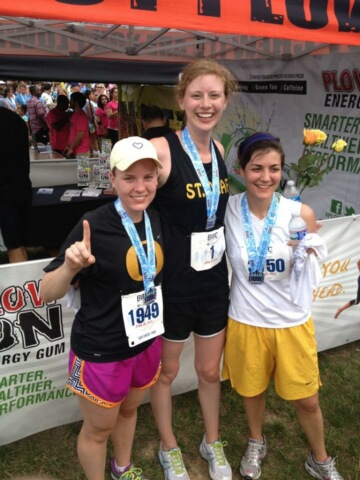 “I was watching a friend run a half marathon in Washington, D.C.,” said Dutton, who is an Advocacy Assistant for the Lutheran Immigration and Refugee Service in the nation’s capital. “I was already dressed in running-type clothes and I was watching everyone go by and said maybe I should try it right now. I wanted to be part of it so I just started running parallel to the course for about a half mile. After I finished, I didn’t have any lingering problems.”

Although it was often mentally and physically challenging, Dutton continued to move forward in her progress.

“When I started running again, it was very different than how it was before,” she said. “I could really feel the impact. It was a little disconcerting. I spent so much time (training) before the accident and knew how my body felt.  To me, that was the most difficult part, re-testing myself to run my body in a new way.”

“Overall I was able to go slowly,” she continued. “That was the hardest, readjusting my expectations. Once I was able to readjust and understand what I had to do, that’s when I was fine.”

In preparation for the Baltimore Women’s Classic, Dutton averaged about two miles a day, four or five times a week the last few months. Again, her overall goal was just to make it from Point A to Point B. The numbers on the digital clock at the finish were of no concern.

With the verbal assistance of her sister-in-law and one of her good friends who ran alongside her in the race, Dutton completed the 5K distance in a time of 31 minutes, 24 seconds. She was 909th overall in the field of 3,208 entries.

The reality of finishing the 3.1-mile race came into focus with about a mile remaining.

“We made it to two miles and I was feeling really good. Right then I knew. That’s when I knew for sure,” she said. “(My sister-in-law and friend) were great.”

Back in late September during one unforgettable day, there was a good possibility that Dutton would never run again, never mind finish a 5K race. On June 23, she overcame the odds and conquered that quest.

“It was a really good feeling. It felt like I had crossed off the final chapter in my recovery,” Dutton said.  “I felt like everything came into full circle. There were a lot of family and friends that came to see the race. It was a very definite moment in my recovery.”