This content requires a MileSplit Pro plan.
Join Now and select any plan for instant access! Start your seven day trial to read this article 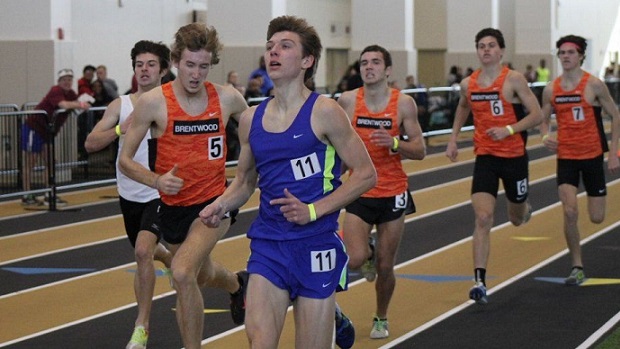 Greeneville (TN) senior Wesley Pectol won the Vanderbilt High School Invitational mile race on Saturday with a US #9 time and 5 second PR of 4:16.45. It was a narrow victory for Pectol, who had plenty of runners on his heels with five others running under 4:20 with him including four remarkably from the NXN third place squad from Brentswood High School in Tennessee between Taylor Caldwell (2nd, 4:16.48), Coleman Churitch (4th, 4:17.21), Alec Thomas (5th, 4:17.67), and Alec Thomas (6th, 4:17.67) while Kentucky runner Patrick Gregory (3rd, 4:17.00) was able to split up the Brentwood pack. 4:15 to 4:20 range seems to be the times that many of the top prep milers are stuck at currently across the nation with the exception of Austen Dalquist of Texas as the national leader with his 4:12.46 performance at the Arkansas Invitational, while US #2 through US #20 are found in the 4:15 to 4:20 range. Between the New Balance Grand Prix elite high school mile race this weekend in Boston and the Millrose Games next weekend at the Armory, the nation should see its share of runners dipping under 4:15 and possibly our first sub 4:10's of the indoor season.

A list of the top 50 indoor track & field boys performances nationally according to results and performances entered in the MileSplit database as of February 4th. Email any updates, mistakes, corrections, or missing performances/results to brandon.miles@flocasts.com. We will make any updates as soon as possible.