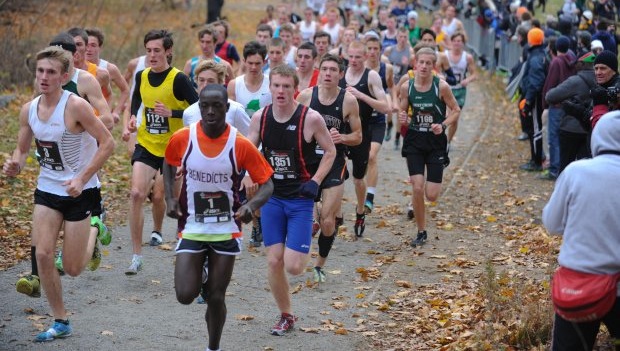 Green and Cheserek in control of the race just before the mile. (Photo by Don Rich)

If Edward Cheserek were an automobile, the odds are pretty good that he would be a fiery red convertible.

Powerful enough to storm up and down even the steepest hills yet nimble when the path is full of twists, turns and (yes) railroad ties. Both even look fast when they are standing still. But like the sports car, Cheserek is at his best when he approaches full speed.

The prohibitive favorite to defend his Foot Locker Northeast Regional championship, the St. Benedict's Prep standout from Newark, N.J., did not disappoint, cruising to the front and handling everything that historic Van Cortlandt Park could throw at him. His winning time of 15:21.8 was a full 15 seconds ahead of a seeded field of 169 boys over the New York City layout and just a second off his effort from a year ago at Sunken Meadow.

“Today, I wasn't expecting to come here and see the wind like this,” Cheserek said of the strong gusts that buffeted the field over the race's opening 1,200 meters and the final long sprint to the tape. “I thought the race was going to be better. It was kind of too windy, and that's why I ran slow a little bit.”

With only the biting cold wind to challenge them on the flat opening segments, the boys field quickly bunched and became a physical place to run, with at least one runner tumbling to the ground and others looking for safety near the front.

“I got pushed and shoved a little in the beginning, so I didn't want to get spiked and fall down or something along those lines,” said Jonathan Green, who joined Cheserek as the only returning Finalists from 2011. “I decided to go out a little harder and not fall versus stay back and do my thing. I went out a little hard, but it worked out in the end. That's all that matters.”

Cheserek, who cracked the 12-minute mark in winning the 4K race at the Reebok Manhattan College Invitational on Oct. 13 in Van Cortlandt, smoothly moved to the front and avoided a main pack that was full of contact between the runners. He pulled along Green, Shawn Wilson of Marlton, N.J., and then the main chase pack.

“You have a turn about 600 meters away so everybody is still going hard for 600 meters,” said Green, who was able to hold form long enough to gain the runner-up spot in 15:36.8 and a return trip to San Diego. “It's people pushing and shoving, it's rough for that entire 600 meters. Once you make that first turn, it kind of slows back a little and people get into their race plan.”

Cheserek was the first to crest Freshman Hill and cross the bridge over the Henry Hudson Parkway to the challenging Back Hills loop. Now shielded from the wind, the defending champ went to work on the ups and downs of the course's midsection.

“I was trying to push a little bit on the Back Hills,” said the winner, who noted that his training is on target for a possible title defense in San Diego's Balboa Park. “I know I'm OK with the hills, but I was trying to push over there. I wasn't even moving well because the fast part of the course was too windy and that affected my chances so I wasn't even going well.”

Although the pace was not up to his standards, Cheserek continued to pad his lead on the hills and turns before the field crossed the bridge once again and ran alongside the expressway before making a final left turn for home.

Wilson maintained his place throughout and was third in 15:42.5, while fourth went to Brendan Shearn of Frackville, Pa., who stayed near the front of the chase pack in registering a 15:45.5.

“I wanted to go out in the middle of the pack toward the front and then just work through the woods and work through the hills,” Shearn said. “And as soon as I hit the downhill, fly to the finish. That was my plan.”

“Since eighth grade, I've just wanted to qualify for this national race, by far the most important race of my life today,” Norris proclaimed.

The biggest movers amongst the Finalists were the final two to cross the line and grab a ticket to San Diego. Replicating their back-to-back finish near the top of their state Class AAA race, Brent Kennedy of New Kensington, Pa., and Austin Pondel of Columbus, Pa., held off all challengers to finish ninth and 10th, respectively.

“I thought if I went out too fast, things definitely wouldn't work out for me,” said Kennedy,who crossed the line in 15:50.9. “I went out through the mile pretty far back and really wasn't feeling great, but people started to come back (to me) through the Back Hills. I pulled up into about 15th place at the two-mile (mark) and was able to get those last six spots.”

Normally positioned at the front of the field throughout the regular season in Pennsylvania, Pondel was farther back than Kennedy near the base of Freshman Hill, counting almost 30 competitors in front of him. The senior, who crossed the line in 15:51.0 and almost four seconds clear of the nearest runner, was able to regroup in the final two-thirds of the course and check another goal off for the 2012 season.

“I knew it was kind of rolling in the second part, and I knew a lot of people would go out too hard on this flat stuff,” Pondel said of analyzing the final two miles. “So I was relying on other people's mistakes, kind of.”

In the state team battle, New Jersey and Pennsylvania each scored 42 points, with the Keystone state group gaining the upper hand in the sixth-runner tiebreaker.