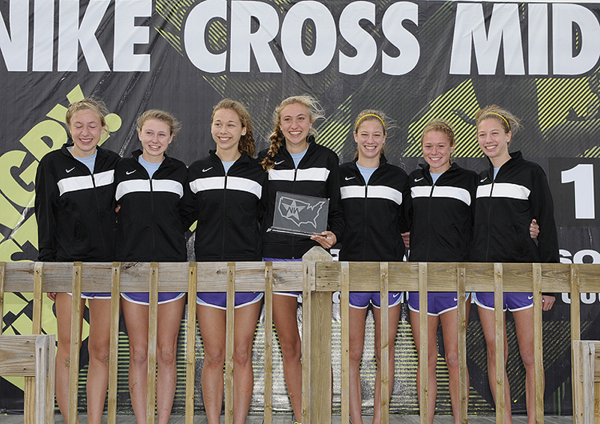 Carmel girls make it 3 straight and the boys go along this time. (Photo by Ken Moreland)

TERRE HAUTE – Nike Cross National regional titles are often won well beyond the leaders and deep in the packs following.  On a day that was dry and mild, but with ferocious 25-30 mph winds, the 2012 NXN Midwest Championships – for the most part – were no exception.

No teams epitomized that concept better Sunday than those from the Carmel Distance Project (Carmel IN HS), which will send a girls team to Portland for the third consecutive year and qualified its boys for the first time ever.  In the girls championship, US#1 Carmel had three finish virtually together in 22-23-26 (scoring 11-12-14) and executed a 27-second spread between their first and sixth in winning with 91 points.  The Carmel boys actually had just one runner score in the top 30, but a miniscule 8-second spread between their second and sixth runners earned them the runner up spot in the day’s final championship with 162 points.

“We know our strongest suit is pack running,” said Carmel boys coach Erhard Bell. “We knew we didn’t have a real front-runner.”

Meanwhile, the men of Kroy (York HS IL) have won about every way you can do it – from the front and from everywhere in the pack.  That’s why they’ll be going to Portland for the ninth straight year, the only club to qualify for every NXN Final.  Sunday, the US#12 Illinois 3A state champs had one high scorer (Scott Milling in 8th, scoring 3rd) and then were simply way better than anyone else, scoring 95 points to win by 67 over Carmel.

And, as it has been every year since 2008, the Land of Lincoln will be represented by teams of both genders.  North Naperville (3A state champ Naperville North HS) earned their first berth since the pre-regional days of 2005 in second behind Carmel with 107.

“We didn’t know we had it until we were announced at the awards,” admitted Naperville North senior Grace Carballo.

All of that left the action at the front of the two championship races mostly to athletes competing as individuals.  That was the clearly the case at the front of the girls’ race, as US#13 Warsaw IN senior Ashley Erba broke away after two miles from #22 Glenbard West IL junior Madeline Perez and triumphed in 17:38.8.  It was a sweet, sweet win for Erba, who ran a few ticks faster here at her state meet two weeks ago, but was a tough second behind Anna Rohrer (who did not compete here). 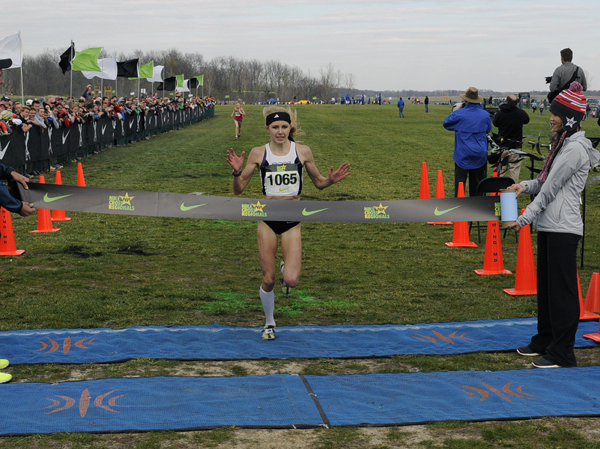 Victory is sweet for IN star Ashley Erba. (Photo by Ken Moreland)

Note: Girls championship winner Ashley Erba deferred her spot to NXN Finals,
telling NXN officials that she does not "want to race five weeks in a row" and plans to compete at Mideast Meet of Champs and Foot Locker Midwest.

“It felt really good to me,” said Erba.  “Two weeks ago, I was not quite peaked and not feeling too good.”

Perez, the Illinois state meet record setter at Detweiller last weekend, closed well after getting broken by Erba and was second in 17:46.6.  Those two were followed by two of the nation’s most impressive freshmen for 2012 in Taylor Werner and Mary Kate Vaughn.  Werner, the Ste. Genevieve MO star who was unbeaten on her way to the Missouri Class 3 state title, took third in 18:08.6 – just ahead of the 18:08.8 from Vaughn, who swept through Ohio en route to a D2 crown herself.  Rounding out the five who qualified individually for the NXN Finals was Wilmette Running Club (New Trier IL) senior Courtney Ackerman (18:12.4), who as mentioned above ran with her team in Portland in 2011.

If Ackerman’s team gets tabbed for an at-large berth, then 6th-place Bobbie Burgess of Phoenix Fire (West Lafayette IN), who ran 18:14.4 and was 24 seconds ahead of seventh, would get to go to nationals.

The boys individual battle became a super strategic race as a huge pack of more than 15 runners stayed together through two miles.  Shortly thereafter, unbeaten US#15 Ohio D1 state champ Sam Wharton of Tippecanoe tried to break the pack and appeared to have it, but as the field turned into the headwind for the long, uphill finish, Wharton was reeled in.  It came down to who had the best kick in these trying conditions and that turned out to be O’Fallon IL senior Alex Riba, who was running for an Illinois 3A state runner-up team that hoped to contend, but finished ninth. 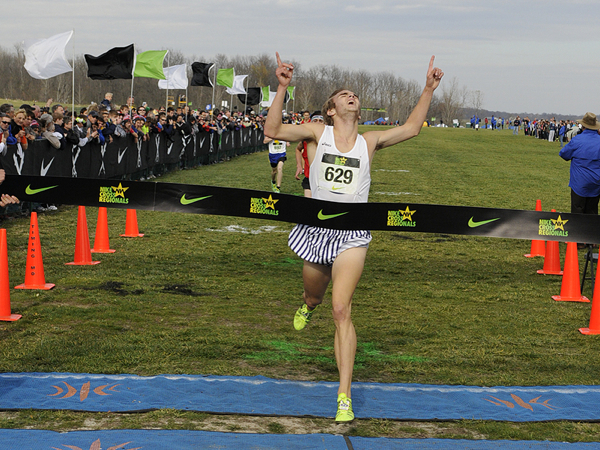 Riba’s long final surge netted him a 15:30.1 and an impressive title for a guy who was fourth individually at state.  “I was really just thinking top five,” he said.  “I didn’t really think about winning at all (until the very end).”

Behind Riba, Wharton hung on for second in 15:32.0, with Lake Orion MI senior T.J. Carey becoming the only qualifier from the Great Lakes State in third at 15:33.7.

The next two spots went to runners who had beaten Riba in that Illinois 3A finale.  Prospect senior Quentin Shaffer continued his amazing season (this is only his second year of running) in fourth at 15:34.3 and US#13 Chicago St. Ignatius senior Jack Keelan – an overwhelming victor at Detweiller last week, squeezed in for a Portland ticket with 15:34.6.

The first man out was Ohio’s other super Sam – D2 state champ Samuel Prakel – who was second behind Wharton at one point but was outkicked and settled for sixth in 15:37.3.  Prakel, however, was far from the only harrier who found the course and conditions daunting.  Ohio D1 runner-up Jacob Dumford (Westerville North) was in qualifying position but ran out of gas during the finish and came in 24th.  And Indiana state champ Connor Sorrells was among the leaders early, but faded to 103rd.