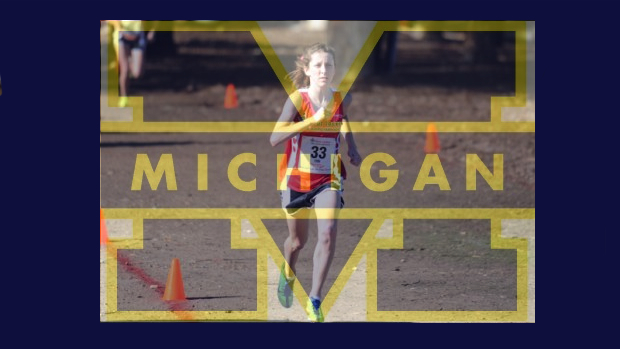 Erin Finn (West Bloomfield HS, MI) announced today that she will be running for the University of Michigan beginning in the fall of 2013.  Finn enters her senior year of competition as one of the most decorated harriers to hail from the state.  She boasts a PR of 4:47.08 for the Mile run and an impressive 10:18.82 for the 2 mile run.  In the winter of 2012 Erin also set the national record for the 5000m run indoors with her 16:19.69 clocking at the New Balance Indoor National meet at the Armory in NY.  She began her successful junior season by placing 2nd in the Foot Locker Nationals to Wisconsin's Molly Seidel.  Erin will join a talented squad that also includes past Foot Locker runners Shannon Osika, Brook Handler and Taylor Manett.

Erin is obviously very excited with her choice, as evidenced by the message she shared with us below!

"I really trust Coach McGuire. He has coached for a while and knows what he is doing. I also love the team! I have known a couple of the girls for a while (I met Shannon Osika and Brook Handler at Foot Locker 2010 and Taylor Manett at Foot Locker 2011) and it will hopefully easy the transition from high school to college.

I think that Michigan is on its way back to the top. Michigan has brought in some really great recruiting classes in the past two years and hopefully will continue to. I think that a Big Ten title is in line for this year and hopefully for years to come! I think that U of M will only become more competitive in the National meet, too.

Finally, the University of Michigan is a great school. I want to major in biomedical engineering to eventually pursue a career in medical research. Michigan offers various internship programs and numerous ways to receive academic support (especially for its athletes). I believe that no other university can offer me a better education.

I am 1000% (that wasn't a typo!) that Michigan is the greatest school in the world for me (and for anyone else)!

I am SO EXCITED TO BE A WOLVERINE!