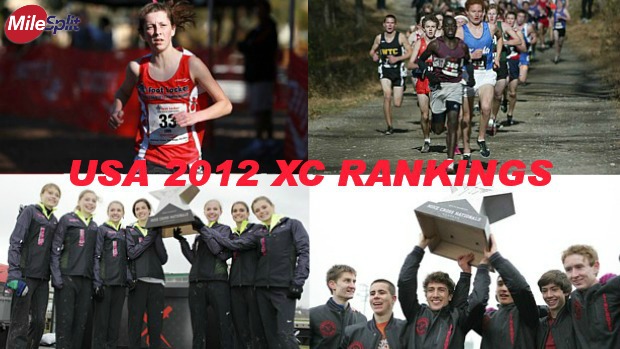 These rankings are based primarily on 2011 XC performances of returning athletes on respective teams, with minor consideration to incoming freshmen and transfers of which we are aware.  Future rankings will be based on relative accomplishments during the season, particularly in head-to-head competitions.

At the top, we’ve taken the approach that “you’re queen of the hill until someone knocks you off”.  Therefore we pick Fayetteville-Manlius HS, Manlius, New York as our #1 team nationally going into the 2012 cross country season.  Graduating only one of their Nike Cross Nationals championship team, F-M has the quality and depth to repeat.

The other team to watch is Grosse Point South HS, Grosse Point, Michigan.  Led by the Meier twins (Hannah & Haley), Grosse Point has one of the best top-four-runners ever assembled on a U.S. HS team.  If their top four remain healthy and they find a fifth, they could be even better than the six-year reigning NXN champion F-M.

If F-M falters even a little, they might not even be the best in their state.  Holy Names (Albany), Bronxville (if/when Mary Cain returns), and Saratoga Springs will be powers that could pass them by, giving New York the nod as the best girls HS XC state in 2012, with a slight edge over California.

MileSplit’s next preseason rankings (boys individual and team) will be forthcoming soon.  Then weekly rankings will follow through the end of the season beginning September 10 as -  girls individuals each Monday, girls teams on Tuesdays, boys individuals on Wednesdays, and boys teams on Thursdays.