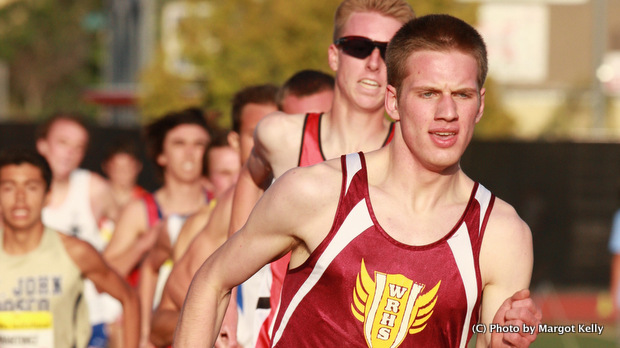 Welcome to Track Chats 2012! We continue with middle-distance ace Marcus Dickson from White River HS in Washington.  Marcus won the prestigious Brooks PR mile indoors with a stellar 4:07.18 and then showed his outdoor prowess with a runner-up finish in the Arcadia Mile in 4:09.41 behind NBIN mile champ Brad Nye of UT.  Marcus then turned heads at a duel meet last week where he set a school record with a 4:05.83 solo clocking over 1600m.  He followed up that performance with a 1:49.45 800m at the Shoreline Invite last weekend.  Marcus will be running the Dream Mile in NY on June 9th at the adidas Grand Prix.  Check out more about him below!

MileSplit - 4:09 for a full mile in early April must have you excited for the season. What are you thinking now that you have gotten this out of the way?

Marcus - It got me really excited and I'm hoping to just keep on improving my time and to hopefully win some big upcoming meets.

MileSplit - What is it like in WA with such great competition? That was a great mile duel you were in with Erik and Korey.

Marcus - Washington has amazing runners year in and year out. Korey Krotzer is one of my training partner and best friend, he is helped me get so much better, it's always fun to get out and race him! Erik is a great runner and it was fun to race him as well because we will be teamates next year at Byu!

Marcus - I've watched my sisters and brothers run track since I was 5 years old and I honestly just fell in love with the sport!

Marcus - My entire family all loves to run and encourages me every step of the way. Also Chris Lukezic was on the same high school as my oldest brother Mike and they set the 4x800 national record. Growing up watching Chris run a 4:04 in H.S. and 3:33 in the 1500 as a Pro has motivated and influenlenced me a lot.

Marcus - 4x400 is by far my favorite event! Thrill of being with your team and the heart people put into it. Also the mile because everyone at school always wants to know about your "Mile" time because that's what they have done in gym class since first grade.

Marcus - Damien Marlow, Adam Leahy, Jerry Scheidt. Without my coaches I wouldn't be where I'm at today. I have total faith in the workouts they give me and they always teach me to just RUN HAPPY.

Marcus - Olympics because it's what everyone dreams of running in.

Marcus - I love going against guys who dominated me in XC and then I try and get them back in track, a little pay back!

Marcus - Winning the 4x400 state championship with my Brother Mat and two other best friends who were twins. My H.S. hadn't won a state titile since 1972 and we brought it back home to BUCKLEY!

Marcus - Win a team state championship. Also, to make my PR's so hard to beat that my little Nephew Carson (who is really fast) won't ever beat them when he gets into H.S.

Marcus - Make the NCAA championships. Be a top 5 1500 all time at BYU. Someday make the Olympics.

Marcus - Jorts. Jeans and shorts, can't go wrong with that.

Do you like Words with Friends or Angry Birds…

Marcus - Going out and seeing the world!

Marcus - Sun but I better like both because I'm going to run for BYU next year...

Interview with Dickson and Korey Krotzer at the Pasco Invite