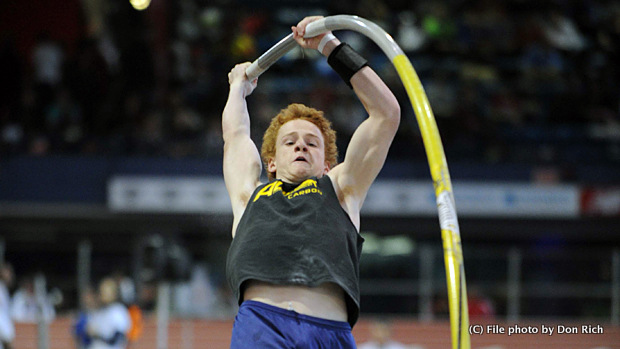 Shawn Barber's approach at the NBIN meet in 2012. (Photo by Don Rich)

The progression to his personal best of 17 feet, 8 inches, set at the beginning of March, was a steady process that first began six years ago on the family’s farm in New Mexico. In a Quonset Building, a steel-arched, hangar-like facility that provided shelter for the livestock and a playground for an 11-year-old kid.

Housed inside the “big barn” was gymnastic equipment, an Olympic-size trampoline and, most importantly, all the necessary components to pole vault.

My dad had a passion for it,” said Barber, about his coach and father, George Barber, a two-time Olympic Trials competitor for Canada in the 1980s with a best of 17-10 ¾. “It was a lot of fun. I didn’t really understand it. I saw it as a game, something to do to pass the time hanging at the barn. I still see it as fun, but I also see it as something that can take me places.”

These days those places include the University of Akron next fall where he received a full scholarship in mid-February and, if things work out as planned, the U.S. Olympic Trials (June 21-July 1) where he’s looking for a top finish and a trip to London for the Summer Games.

I’d like to make it to the Trials and feel I have a good shot to go this year,” he said. “It would be good to jump 18-6 or 18-8 and get the Olympic standard. I would definitely like to see myself do that.”

For the 17-year-old Barber, a second-place finisher at the New Balance Indoor Nationals last month, the expectations are high.  But they are expectations that are well within reach for this determined teenager. 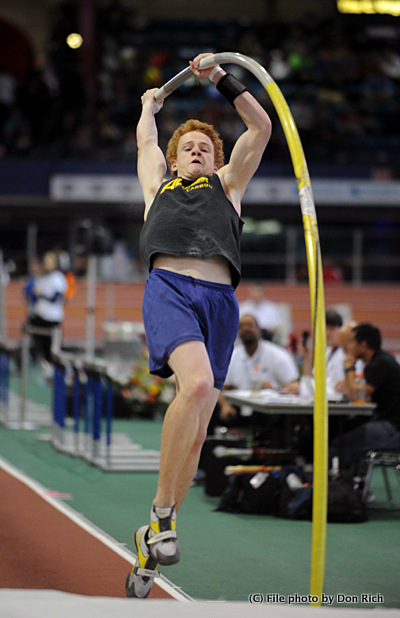 Especially after what he’s done so far in 2012.

After a tough junior season last year by his standards, one where he still had a best of 16-6, Barber has raised the bar to new heights his final season at Kingwood. Since January, he has broken the 17-foot barrier four times, including his PB set on March 2 at the Barbers Hill Invitational at Mont Belvieu. In his four other times this year, the Texas vaulter has registered heights of 16-8, 17-6, 17-6 and 17-6 ¾.

He’s a great athlete. A lot of times kids just get thrown over to the pole vault. He didn’t. He’s a very, very good athlete. He works extremely hard. He enjoys it. You put all those ingredients together and you’ll end up a great vaulter.”

Barber attributes his father’s expertise as a big reason for his success. Along with his Trials’ appearances, George Barber, a UTEP grad, competed for the Canadian National Team and was a competitor in the Pan American Games.

It’s about excellent coaching,” states the younger Barber. “That’s all I can say. I can’t say it’s been anything else. My dad has done a great job. I am not going to say I am a better athlete or that I have a lot more ability than (other competitors). It’s the coaching.”

The slender Barber, who is 6-foot-2, 170 pounds, will compete in the regionals at the end of the month and will look to win his first individual 4A crown at the UIL Track and Field Championships on May 11. The national record of 18-3 is also something that is on his radar.

He has been really close to clearing 18 feet,” Elliott said. “It’s just a couple of things here and there.”

In his career, Barber had made leaps and bounds in his progression since first clearing 10-6 as an innocent 11-year-old. He skipped his freshman season at Kingwood due to a personal reason, but attained 14 feet or higher three times as a tenth-grader, twice hitting 14-6.

Barber’s junior season featured a runner-up finish at the state meet with a height of 15-9 and a victory at the USATF National Junior Olympics with a SB of 16-6. For a good portion of last year’s season, he competed with a broken left foot that wasn’t completely healed until the nationals.

To pass the time during the offseason, the gifted Barber can be found in the pool. He’s been a diver for the school’s swim team since his freshman season. This year he captured the districts and regionals and placed seventh in the state meet.

He views the pole vault and diving as similar in some ways.

There is a lot of carryover,” he said. “It’s about kinetic awareness, a lot of knowing where the body is in the air and knowing what your body can handle.”

He has really come along,” he said. “He has grown a lot and gotten a lot stronger and faster. I think the biggest thing he has for him is he’s a very fast kid. He’s uses a 16-foot pole so he’s strong, too.”

Barber is not surprised by his success this year and feels his runner-up placement at the indoor nationals has only increased his motivation to excel.

It was a letdown for me not to win,” he said.” I was disappointed, but I believe the experience has only made me better.”