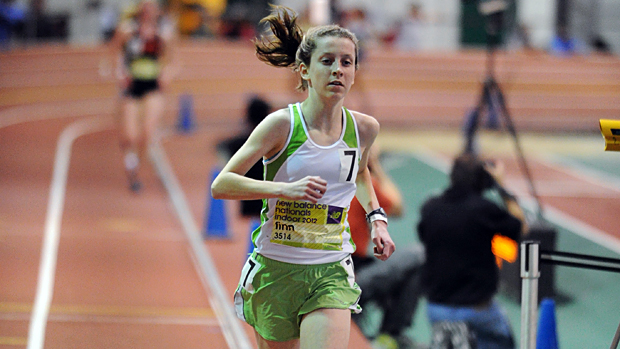 Erin Finn during her record 5k at NBIN. (Photo by Don Rich)

After a grueling cross-country season where she won her first state title, placed second at the Foot Locker Nationals and competed in her first race overseas, Erin Finn was ready for a break. The Michigan runner, a junior at West Bloomfield High, just needed some time off from nearly five months of some hardcore training and racing.

It was only just a week, but as far as Finn was concerned those seven days in mid-January felt like a month, and was long overdue.

“On the fast, 200-meter oval at the New York Armory, the 5-foot-1, 95-pound Finn proved that “mini vacation” boded well to her fitness level. In just her third race of the winter season on March 9, the Midwest phenom broke away from a strong field with a mile remaining at the New Balance Indoor Nationals (NBIN) to win the 5K title with a U.S. high school record of 16 minutes, 19.69 seconds.

The 17-year-old Finn didn’t just break the national mark, she smashed it! Her time was nearly 16 seconds faster than the old record of 16:35.15, set by Waverly Neer of Culver (Ind.) Academy at last year’s NBIN.

The diminutive high-schooler’s “Finn-tastic” performance at the New Balance meet shouldn’t come as a shocker. Since she first realized at the young age of eight that she had some gifted legs, Finn has steadily transformed herself into a runner worthy of elite status; a runner that takes no prisoners and gives that 110-percent effort each time she lines up at the starting line.

That’s just her style, evident by what she’s done in her career and at the Big Apple last month with her wire-to-wire victory. It was a race that began with a sizzling opening mile of 5:07.

“I just felt like I was ready to win and I wasn’t going to hold back,” Finn said. “I like to make a race an honest race with an honest pace.” 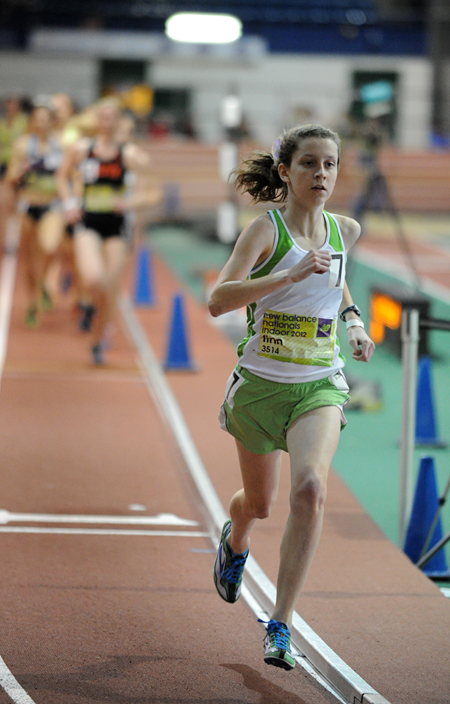 Finn noticed her undeniable talent when she was in elementary school.  By the time she was in second grade she was already beating her mom, an avid runner. She also showed plenty of promise in junior high.

“I was in gym class and was already beating the boys,” she recalled. “I have always been an active kid who ran. It kind of was just natural.”

After an injury-plagued freshman season at West Bloomfield where she suffered a stress fracture in her left tibia and right femoral neck, Finn had a breakthrough sophomore campaign that included a seventh-place finish at the Foot Locker X-C Nationals, a then two-mile personal best of 10:19.28 at the Brooks PR Invitational in Seattle, Wash., and a runner-up finish in the 5K to North Carolina’s Wesley Frazier at the New Balance Outdoor Nationals (NBON) where she dipped under 17 minutes for the first time with a 16:41.33 clocking to Frazier’s 16:24.83 effort.

Finn’s junior season has been equally impressive. She captured her first individual state title this past fall by winning the cross-country championship with a season-best 17:22.6 over the demanding five-kilometer terrain at the Michigan International Speedway.

She followed that race by finishing second to Wisconsin’s Molly Seidel at Foot Locker in San Diego. In her usual customary style, Finn did the pace-setting for most of the Dec. 8 race before Seidel assumed control  in the final stretch.

Finn’s season on the trails concluded when she went overseas to compete for Team USA in the Great Edinburgh Run in Scotland. The American squad, consisting of top high school runners and collegians under the age of 19, won the team prize with Finn taking seventh overall and sixth among her teammates.

Finn led for much of that race, one which she deemed wasn’t her best performance.

“I was ready for a break to rest my body,” she said.

Finn’s winter season consisted of just two races before the nationals; two races that showed the time off had done her well. She took gold for 3,200 meters at the MITS Meet at the University of Michigan on Feb. 16 with a PB of 10:37.42. Less than two weeks later, Finn placed third at the Brooks PR Invitational with another PB of 10:18.82 for two miles.

The Brooks’ meet, another race she did a good portion of the front-running, proved to Finn that something special could happen at the NBIN.

“I just knew with the training that I had I was in really good shape,” she said. “After the race, I felt I could have gone an extra mile at that pace.”

Finn faced a stacked field at the NBIN, featuring such runners as Frazier and eventual second-place finisher Haley Pierce of Delaware. That didn’t faze her as she established the pace right from the beginning with her quick 5:07 split. She maintained a slight edge over Pierce by mile two and then coasted to the triumph.

“I never surged in the race and beat her by 11 seconds,” Finn said. “It was incredible. I knew I had a shot the whole time, but crossing the finish line was really special and really surreal. I am still really shocked.

“ Finn is now preparing for the outdoor season where she’ll be gearing her training and racing towards a trip to the IAAF Junior World Championships in Barcelona where she’ll compete in the 5,000. To earn a slot, she’ll skip the NBON on June 14-16 and instead focus on the USATF Junior Nationals, held the same time.