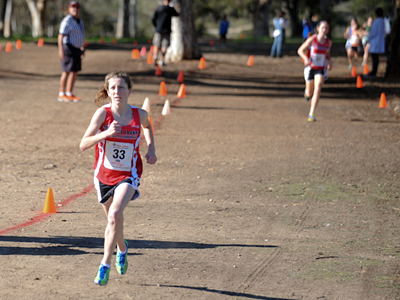 The 2011 Foot Locker races offered two completely different styles of racing for fans to comtemplate but in the end the result was two high quality races  with very deserving champions. The girls' race saw Erin Finn of Michigan break away early and establsih a formidable lead over the entire field.  As she went up the hill by the tennis courts at about the 800 meter mark Finn had established a solid ten meter lead over a chase pack that included Karlie Garcia (CA).

Finn rolled through the mile mark in around 5:10, which served to stretch out the pack, which managed to stay together for a reasonable period of time.  At 7:20 Abbey Leonardi (ME) & Grace Tinkey (GA) assumed the lead of the pack.  Included in that group were Makena Morley of Montana but more importantly looking back Molly Seidel of Wisconsin began her move through the line of challengers and headed towards the front.  Finn, however, continued to lead when she returned to the starting area, but her followers had morphed into a group that continued Seidel, Leonardi, Grace Tinkey, Morely & Leonardi. 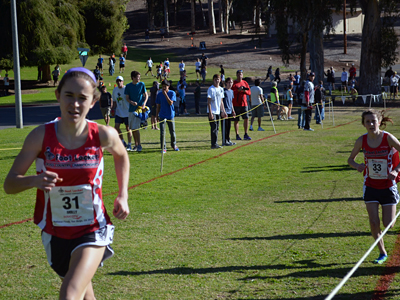 The two mile mark was reached in 11:18 with Finn still in the lead but she was yielding ground to Molly Seidel.  In the past Upas has been a crucial point of the race and it would be on this day as well.  It was at the 13:56 mark, when Seidel took the lead on Upas and opened a gap over Finn and although it at first appeared that the race was over the Michigan runner fought back & reclaimed the lead going down Upas Hill.  It was anyone's race as they approached the three mile mark but Molly Seidel reasserted herself  to triumph in a time of 17:22.  Erin Finn held on gamely and crossed the line  two seconds later.   Laura Leff of N Y placed third in 17:34 - two seconds ahead of Abbey Leonardi, while Karlie Garcia crossed the line in fifth. It was a strong field with fifteen runners breaking eighteen minutes.

The runners began streaming in at this point despite the fact that the times were quite brisk.  Grace Tinkey of Georgia, who was competing in her third national race finished sixth in a time of 17:37 and Catarini Rocha of Mass. followed in seventh a second later.   Kelsey Braithwaite of Utah garnered eighth in 17:39 to edge Makena Morely, a freshman from Montana, by a second.  Julia Bos of Michigan came in tenth (17:40) and Sophie Chase (VA) placed eleventh.  Karis Jochen of Texas took twelfth in 17:47 and Northeast Regional winner Angel Piccirillo of Pennsylvania was thirteenth.  The field was so strong that Lindsey Burdette (MI) & Alexandria Fons(WI) placed 'only' 14th & 15th, yet broke eighteeen minutes.  This is probably the highest total ever. 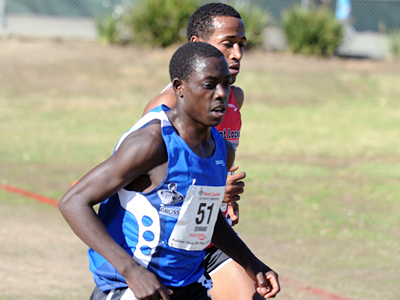 The boys race was anticipated to be a duel between Edward Cheserek of New Jersey & Futsum Zeinasellassie of Indiana and they matched surges for most of the race after taking the lead from C J Albertson of California.  Albertson led the field through the 800 meter mark in 2:21, although it had not been his intention.  Not too far behind C J were Ed Cheserek and Futsum Zeinasellassie, who led the large phalanx of runners, who made up the chase pack.  The major surprise was a rather slow first mile in 4:41 but after that the two prerace favorites began flying over the course.

The race really began in earnest the first time up Upas Hill, when Edward Cheserek picked up the pace.  Futsum made an immediate response to cover the move.  They quickly began to draw away from any would-be challengers.   While the leaders raced down Upas at the 6:14 mark Darren Fahy of California made a fateful decision to move into third.  The effort to maintain reasonable contact would cost him in the end, as he would struggle home.   Soon Edward & Futsum reached the half-way point in 7:19 and they widened their gap as they appeared to pick up the pace.

The two runners out of Africa continued their individual duel through the 8:54 mark of their seperate race, while behind them Thomas Graham of North Carolina took over third place.  The leaders swept past the two mile mark in 9:50 and seemingly picked up the pace again.  Announcer Tim O' Rourke commented that they "were flying", as I looked at my watch at the 11:15 mark.  There could be no doubt that they were racing in earnest for Futsum soon took the lead only to have Edward take it back.  It was rather fitting that the two runners, who had appeared to be inseparable all weekend at the Hotel Del Coronado, would remain together for the bulk of the race.   Still, as Futsum would later announce, they were not friends on the course and each began to throw in surges which were to break their rival.  How many times they spurted back and forth as they excahnged the lead is hard to say but it was a significant number of times.

For all the effort the pair had exerted during the last mile and a half, it was rather stunning to watch them "sprint" together up Upas Hill.  Both appeared to be in overdrive when they charged the formidable hill ...........which is even more difficult on the second ascent.   Each runner continued to make a definite move to take the lead only to have the other battle back.   In the end it came down to which runner, could make the final surge and that was Cheserek, who edged Futsum by a second with his time of 14:52.  Although not the course record, that some had anticipated Cheserek tied Bob Henes for twelfth place on the all-time Balboa Park list, while Futsum moved into a tie for 14th with Meb keflezighi, Troy Maddux, Jon Hatley & Jay Marden.

Spokane's Nathan Weitz came down Upas Hill for the final time in eighth place but with fire in his eyes he stormed over the final portion of the course to take third after sweeping past runners on the final grade. The Northwest runners, as a whole were following Nathan, as Andrew Gardner (WA) moved through the field and Dallin Farnsworth (ID), who had struggled a bit in mid-race, reasserted himself and made a late charge from as far back as 18th place.

Jake Leingang of North Dakota placed fourth in 15:22 - a second behind Weitz & Daniel Vertiz (TX) finished fifth in 15:23.  Andrew Gardner (WA), who is also from Spokane, followed up last year's fourth place finish by coming in sixth as a junior in 15:24.  Tony Smoagiewicz of South Dakota earned seventh in 15:24 finishing a second in front of Joshua Brickell of Georgia.  Thomas Graham (NC) followed in ninth, while Sean McGorty of Virginia rounded out the top ten with his time of 15:28.   Dallin Farnsworth of Idaho, who has been coached by his brother Taylor a Foot Locker qualifier in 2006, earned eleventh place and All-American honors with his time of 15:29, which topped Ahmed Bile (VA) by a second.

This was a classic race up front, yet a special race in many ways with a very solid field of runners.   At the awards assembly Edward Cheserek received his silver platter as the 2011 Foot Locker National Champion and made a speech to the runners and their families and in a touching note invited his rival Futsum Zeniasellassie to take the podium with him.  As far as I am aware nothing like this has ever occured before in this long tradition of prep elite racing that is Foot Locker.   Futsum then recounted how he did not want to become friends with his rival, yet he had done exactly that.  It was a fitting ending to the awards festivities, because Foot Locker is much more than just a great race.   It is an event where long-lasting friends are made.   These runners may be rivals in future races at varying levels but they will remain friends.  Maybe even more important they will be a part of a great tradition, as they move on as Foot Locker alumni.   They are a very select and special group and Saturday's races were yet another quality edition in this long-running series.