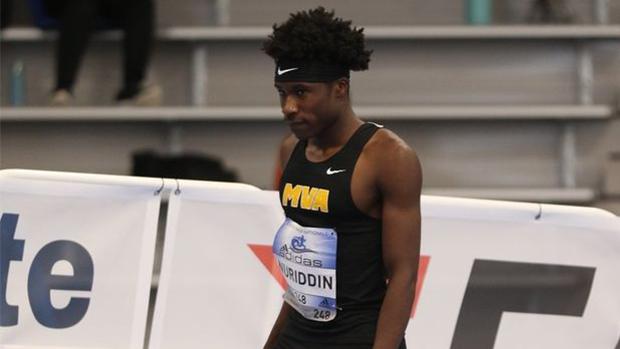 Did Zyaire Nuriddin always envision that he would become one of the best high schoolers to ever run at 400 meters?

In fact, when the Montverde Academy (FL) sprint talent saw his 46.04 time on the video board as he ran his way to an indoor 400m title at adidas Track Nationals last March, he felt more shocked than anything.

"It opened my eyes because I didn't think I was going to be able to run those fast times so quickly," Nuriddin said. "I didn't know it was going to happen that fast. It kind of just opened my mind for the possibilities for years to come."

In the months that followed, Nuriddin quickly acted upon that glimmering potential he had come to grasp. During the outdoor season, he lowered his all-time best under 46 seconds, clocking a time of 45.78 seconds at the Florida Relays, earning him a top 30 time in history.

Now 10 months removed from that game-changing race at adidas, it's safe to say that Nuriddin could be the one, the one that finally breaks Elzie Coleman's long-holding 400m indoor record of 45.92 that's stood for nearly 20 years.

And it's a pursuit that begins at The VA Showcase.

This weekend, Nuriddin returns to Virginia Beach, and to the same track, where he had his season-ending all-time effort as a junior. He'll do so at The VA Showcase, a meet which has historically produced national records.

Now, a disclaimer: He's not running the 400m this weekend.

But perhaps it will be a stepping stone toward that storybook ending in March, when he will chase after a 400m indoor national record and look to become the best ever at the distance.

"I'm really looking forward to seeing how much I improved over the last year because I can definitely see it at practice," he said. "Now, I'm just excited to see how much it changes on the track at a real meet."

In many ways, Nuriddin's final indoor meet should represent the first chapter of his career.

He enters his senior season as the No.1 boys talent on the MileSplit50 rankings, a top University of Tennessee signee and someone tabbed as one of the most electrifying athletes to watch on the oval on any given day.

In 2023, being the best is now part of his reputation.

It also marks what could be the start of a Montverde Academy super-year this track and field season.

Not only does the newly-anointed Florida powerhouse have the nation's best quarter-miler at the helm, but it also boasts a star-studded roster including No. 1 boys recruit Micah Larry, multi-national champion sprinter Micayah Holland and stellar transfers like top 20 recruit Issam Asinga and California 110mH winner Kai Graves-Blanks.

It's the latest high school super team, perhaps the best yet.

That's something Nuriddin says he's never seen before at the high school level -- and that excites him, the endless possibilities.

But this indoor season is also a chance for Nuriddin to execute on new personal goals, after his junior year ascension gave him more conviction than ever. Now in his second year at Montverde after transferring from Howard Tech in Delaware, he says he's comfortable with the system and fully believes in the support around him.

"(46.04 at adidas) definitely gave me more confidence and motivated me to take it more serious than I was before," he said. Realistically, though, Nuriddin won't be thinking of the 400m when he lines up this weekend.

"I don't really have any big expectations," he said. "I've never ran those events except the 300m before. I just want to see what I can do in the 500m and get the rust off and get my first meet completed of the season."

Word to the wise: He put serious prep work into his upcoming 500m debut and second-ever 300m race. A series of grueling 350m repeats and 500m workouts in previous weeks aimed to build his endurance.

In the months that followed, Nuriddin quickly acted upon that glimmering potential he had come to grasp. During the outdoor season, he lowered his all-time best under 46 seconds, clocking a time of 45.78 seconds at the Florida Relays, earning him a top 30 time in history.

If he runs true to those entry marks, Nuriddin will rank among the all-time best in those respective events.

Nuriddin says he may not have many big projections for himself other than to shake off the dust at the VA Showcase. But he'll certainly be thrust into the national spotlight. That comes with the territory when you're entered at a meet that has produced countless national records before.

Nuriddin will toe the line with other sprint talents like Mekhi Gammons and Quincy Wilson, along with his own stellar teammates, Jayvian Greene and Graves-Blanks, in what should be quite the rust-buster.

There's some weight that comes with that. He knows the conversation surrounding his potential.

"There definitely is always going to be pressure, it doesn't matter if I was the fastest or slowest," he said.

But Nuriddin also should be equipped to handle those expectations thanks to the belief that's made him unstoppable over the past 10 months. Now, the question again: Does he envision he can run sub-46 and become a national record holder?

"I also am confident in myself and my ability and my practices, so I think I'm ready."