* Sophie Polay of Santa Margarita (CA) takes fifth at the ASICS Clovis Invitational and has made significant improvements on the course as a sophomore.

Nearing the mid-point of the cross country season, many sophomores have made significant gains since their debut seasons on the course in 2021.

Some of the nation's best in the class of 2025 have shaved seconds -- and minutes, in some cases -- of their freshman year PRs to truly become ones to watch now and as they continue with the rest of their high school careers.

Who are some of sophomores that have made significant strides in cross country and have developed into some of the sport's most promising future stars?

Scroll below to see which of the top members of the 2025 class have shown significant improvement with increased experience.

In the always-competitive state of California, Polay is beginning to make a name for herself as a sophomore.

Last year saw Polay clock finish fourth at CIF Southern Sectionals with a three-mile personal best of 17:54.90 as a freshman.

But Polay has recorded times faster in 2022 than that PR from last year -- both at the three-mile distance and the longer 5k distance.

The Santa Margarita sophomore made her season debut at the Woodbridge Classic where she placed 27th in the sweepstakes race with a massive three-mile best of 16:42.80. Nearly a month later, Polay clocked 17:35.10 for 5k -- nearly 20 seconds faster than her PR for the shorter three-mile race as a freshman -- to finish fifth among California's best at the ASICS Clovis Invitational.

That Clovis race could prove crucial, too, for Porlay as she looks to continue building confidence and realizing her potential in time for the California state cross country championships in the coming weeks, where she'll look to compete for the first time in her young high school career. 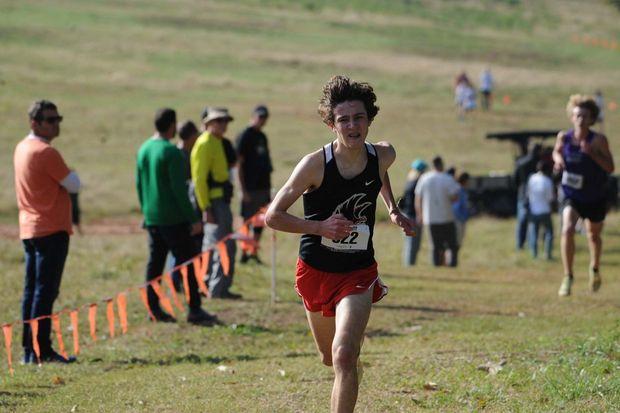 As a freshman in 2021, Haynes put together a long-running cross country campaign, contesting 12 races and culminating with a 21st-place finish at the South Carolina AAAA state meet.

But now as a sophomore, Haynes has emerged as one of the state's top athletes and among the best in his class nationally.

He opened his season with a 15:45.75 performance for ninth at the Eye Opener meet, which made for a 5k PR by over 30 seconds and the first sub-16-minutes race of his young career.

Just two weeks later, Haynes broke yet another barrier at the Warrior XC Invitational. This time, it was the 15-minute 5k barrier, racing to a win in 14:55.00.

That lowered his previous best by a stunning 50 seconds.

Currently sitting at US No. 3 among the class of 2025 and SC No. 2 overall, Haynes has shown 1:23.80 year-to-year improvement in the 5k thus far, which could prove key come time for state championship season.

In 2021 as a freshman, Jazwinski made an immediate impact at Hart High school, and dipped under 18 minutes for 5k once in 15 races.

But 2022 has been an even better story for her, now as a more experienced sophomore.

Jazwinski has already recorded four sub-18-minute races this season -- which makes up half of her contests ran to date -- and showing no signs of stopping anytime soon. Her most recent performance at the proved the best of her underclassman career, running 17:15.10 to win the Portage Invitational this past weekend.

Since last season, Jazwinski has improved upon her 5k personal best by almost 43 seconds, and she ranks in the top 10 nationally among the class of 2025 so far this fall.

Since her freshman season last year, Bloker has shaved a rather impressive 1:23.12 off her 5k personal best, and has developed into one of South Dakota's top distance girls.

And the third-place finisher at last year's South Dakota state cross country championships hasn't just been dominant in the state based on time alone. Bloker has won nine of 10 races contested so far this fall, and she's currently the second-fastest girl in South Dakota behind Ali Bainbridge of Sioux Falls Lincoln.

It also seems that progression remains ingrained in Bloker's dynamism as a racer. Just over the course of the 2022 season alone, Bloker has shown unmatched improvement, opening up her season with a 20:02.41 at the John Collignon Invitational and steadily dropping time with each race, ultimately leading to that 17:12.01 personal best. Moore had a big breakthrough at the Alabama 7A state cross country championships last fall, finishing 16th as a freshman and clocking 16:03.97 -- a 5k PR at the time.

Now nearly a year since his first state meet, and the now-sophomore out of Huntsville has blown his previous records out of the water.

In his past three races, Moore has gone well under 16-minutes for 5k, beginning at the Chickasaw Trails Invitational on Sept. 10 where he finished second in 15:19.54, breaking his previous career best by over 40 seconds.

In his most recent performance at the Jesse Owens Classic, he lowered his PR to 15:10.51 at placed seventh in a deep boys championship field.

Now, Moore will prove crucial in Huntsville's team quest in Alabama, and second-year experience on the course has been vital to his individual progression.