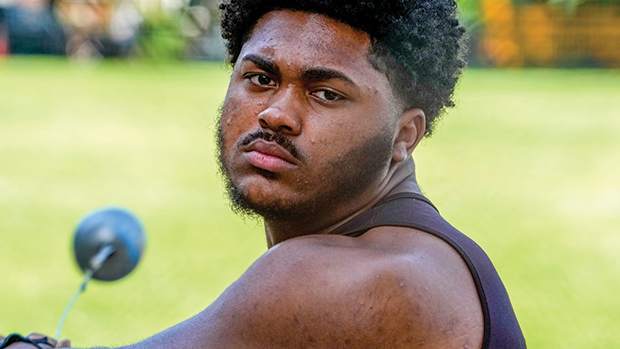 Tarik Robinson-O'Hagan had himself a day on Tuesday.

But he wasn't finished.

In the evening session, Robinson-O'Hagan -- who won more than a handful of national championships this indoor and outdoor season -- won World U20 gold in the shot put, hitting a new overall PR of 20.73 meters (68 feet) in the finals.

Interestingly enough, though, the shot put isn't even his best event.

Robinson-O'Hagan may be targeting an even bigger performance in the hammer -- his specialty.

The Rhode Islander hit the seventh-farthest throw in the first round before shutting it down on Tuesday.

Collin Burkhart, the recent graduate from Nazareth (PA), was the first athlete out of the qualifying position, throwing a mark of 70.84 meters.

Men's Pole Vault: Garrett Brown, a freshman from Stanford, converted on a 5.20 meter vault (17-0.75) to capture advancement into the finals. His U.S.-based teammate, Hershey's Justin Rogers, followed in the second section and finished sixth, also nabbing a spot in the finals with a conversion of 5.05m.

Women's 400m: Mekenze Kelley and Zaya Akins, the Americans in heat three and four, moved on to the next round after performances of 53.59 and 55.23, respectively. Akins, a rising Raytown (MO) senior, was the fifth and final qualifier out of heat four.

Men's 400m: Cincinnati's Steven McElroy has set himself nicely heading into the semifinals after his opening round of 46.38 seconds. He was the second fastest qualifier out of the five sections. Meanwhile, Texas A&M's Ashton Schwartzman also moved on to the next round, clocking a time of 46.76 in the fifth heat.

Women's 400mH: Michelle Smith, a rising junior at Montverde Academy competing for the Virgin Islands, ran the second fastest performance of the first round, hitting 58.35 on the clock. She was followed directly by American Akala Garrett, the United State's fastest 400mH high schooler this season, in 58.40. In the fourth section, Michaela Rose, an LSU freshman, also moved on after winning in 58.44.

Women's 100m: Shawnti Jackson, the rising high school senior from Raleigh Wakefield, was first overall in the fifth section, tying her overall PR of 11.28 seconds. In the first round. Mia Brahe-Pedersen, meanwhile, won the seventh heat in 11.45 seconds and also advanced to the next round. Jackson's performance was third-fastest on the day, behind Nigerias Tima Seikeseye Godbless (11.09) and Netherland's N'Ketia Seedo (11.16).

Men's 110mH: On to the the finals. That's the sentiment Malik Mixon, the recent Northgate (GA) graduate, was thinking as he advanced out of the semifinal with a time of 13.52, second best in the second heat. TJ Caldwell was sixth in heat three, missing qualification to the finals.

Men's 100m: The prelude to the men's 100m final saw Laurenz Colbert, the freshman from Baylor, finish third in the first heat in 10.29 seconds -- Letsile Tebogo ran 10.14 in this heat to win. Michael Gizzi did not advance out of the second heat, clocking a 10.30.

Women's 800m: Juliette Whittaker and Roisin Willis continued their ways on Tuesday, moving on to the finals after times of 2:01.92 and 2:02.49, respectively.

Men's Long Jump: The Americans earned their spot on the podium. Curtis Williams, the freshman from Florida State, and Johnny Brackins, the Baylor first-year, were fourth and sixth, respectively, in the final, producing marks of 7.86m and 7.81m.

Mixed 4x400 Final: The American's first gold came by virtue of this event, and featured a tense race to the line with anchor Kennedy Wade solidifying the team's win. The U.S. improved upon their performance in qualifying with a time of 3:17.69 in the finals. The group featured Charlie Bartholomew, Madison Whyte, Will Sumner and Wade.

Men's 100m: The World U20 stage often highlights the future World stars of tomorrow. Could Botswana's Letsile Tebogo be on that path? On Tuesday, he set a new World U20 record with an incredible time of 9.91 seconds to win the final. The next closest finisher came through the finish in 10.02, while Laurenz Colbert, the American from Baylor, was seventh in 10.24 seconds.

Should this be any question? Two big PBS -- in both the hammer and shot put -- with one (68 foot shot put) granting the Rhode Islander a gold medal at the World U20 Championships.