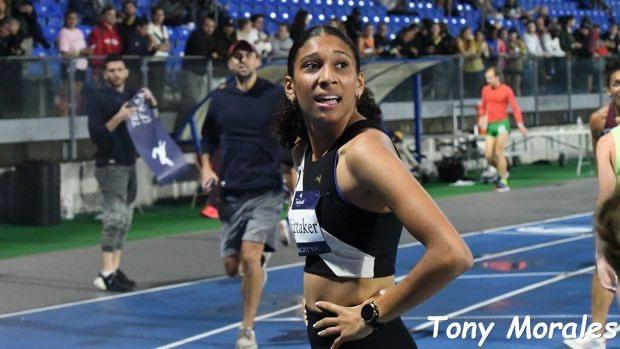 "I set goals, but setting goals is different than actually achieving them. If you would have told me I would be running 1:59 this year, I definitely wouldn't have believed you."

"There was no way it couldn't have gotten better than this...."

Those were the thoughts Juliette Whittaker had when she reflected on her accomplishments from her junior year.

Precisely a year ago, the Mount De Sales (MD) junior was setting new world bests and all-time marks and even stepped foot on to the track at Hayward Field to compete at the U.S. Olympic trials, where she finished 10th overall in the semi-final round with a time of 2:01.21 in the 800m.

For her, 2021 was filled with amazing moments.

"I really exceeded all my goals and expectations for the year," Whittaker told MileSplit's Olivia Ekpone. "I was so happy with how I did and really did not see how it could get better this year."

But as Whittaker entered her senior year, her focus was simply on running well this season.

Then she did that, and some.

In a nutshell, the winter season started out with a bang. She debuted at the Millrose Games, where she won the mile in 4:47.14. The following weekend, she ran the third-fastest 800m ever recorded in high school history with a 2:01.00 at the GSTC Invitational.

That race ultimately created a new standard for Whittaker.

At her third indoor meet of the year, Whittaker entered the 1K at the Ocean Breeze Track and Field Facility in Staten Island. She executed one of the best races of her career and she became the fastest girl in history with a 2:39.41.

Then Whittaker ended up in Chicago for the Meet of Champions and ran a 1,200m DMR leg for a team that consisted of Roisin Willis, Alison Ince, and Mia Cochran. She split a 3:20.65 and was part of the fastest recorded DMR in history for a U20 girls team.

That wasn't all, though. She ended her winter season with another win in the mile at New Balance Nationals Indoor. In an elite high school field, she was able to cross the finish line first with a No. 4 all-time performance of 4:37.23.

Penn Relays was a pivotal moment in Whittaker's senior season. In back-to-back days, she produced two of the nation's fastest times to date.

She kicked off the meet in the mile with a 4:41.18. The next day, she ran a comfortable 2:01 to finish second in the Olympic Development section.

Whittaker thought, "what can I do with fresh legs?"

That moment came at the Trials of Miles: Track Night NYC.

The mindset for this race, she said, was to leave everything out on the track. Up until that point, Whittaker had run five times of 2:01 since she ran at the Trials of Miles: NYC in May of 2021.

Then she lined up, once again, in an elite field of professional athletes. 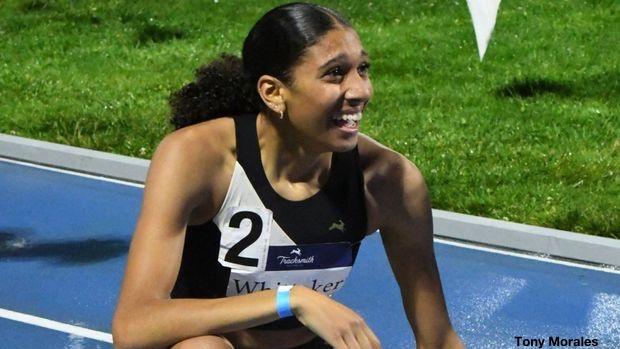 Going into this race, Whittaker said she wanted to pay extra attention to her third 200m.

She sometimes finds herself getting lost in the race mentally at this point and believed the last 200m was where she would find something left to give.

"I knew that if I backed off too much and didn't push everything that I had, I would have been disappointed in the end," she said. "Not for not getting sub 2:00 but for knowing I could have done more. I really just wanted to cross the finish line feeling like I gave everything I had."

If she can get through 600m, she thought, the rest could be history.

Then all of a sudden, everything finally clicked.

She came around the last turn, charged by Olivia Baker, and grabbed the victory at the tape. Whittaker didn't see her seventh 2:01 in a row.

"I set goals but setting goals is different than actually achieving them. If you would have told me I would be running 1:59 this year, I definitely wouldn't have believed you."

The performance ended up being the second-fastest 800m ever recorded in high school history. Whittaker was 0.29 seconds off of Mary Cain's national record of 1:59.51.

"I've been wanting this for a while," Whittaker said back then as she reflected in the moment. "I felt stuck at 2:01 and I ran it so many times. It's not something to complain about but I felt like I've been right there."

And moreover, throughout her senior season Whittaker has made short-term sacrifices in order to get there -- including missing prom and senior events to run at certain meets and practice.

As her high school career comes to a close, Whittaker says she has one more accomplishment she's striving for.

What about a new national record in the 800m?

Whittaker, a recent graduate of Mount De Sales, says she isn't stressed about it: It would just be the cherry on top of her career if it comes.