"I told King, life is a fight. No matter where the journey takes you, you just have to go after what you're chasing." -- Casey Combest

There are no what-ifs in Casey Combest's life when he watches his son race.

What the 41-year-old high school national record holder at 60 meters sees now is a vision of himself destroying competition much like he did 25 years ago, a muscle-bound teenager stomping out of the blocks and forging his body forward like a brick wall, a highly-concentrated pack of 120 pounds flying toward the finish.

He sees King Combest, his 14-year-old son, repeating the steps he once took as a high school athlete, winning a national middle school title at adidas Track Nationals, in the biggest race of his fast-evolving career, owning the same distance he once covered.

Casey set the record of 6.57 seconds back in 1999, well before the advent of fast tracks and super shoes. Now King is operating in the modern day world of track and field tech. He won the national middle school title on March 19 in Virginia Beach, running 7.16 seconds.

Just how fast is life coming for these two? King will be in high school before Casey knows it. What's a father to do?

"My focus now is King," Casey said recently. "Obviously, I miss track. I made the mistakes in my own life. I'm passing everything that I got to my son. And I'm just trying to live one day at a time. And to not create no pressure for him. Just let him do his thing so he can be happy and let everyone know who the new King is."

Casey wants this story to have a different ending. The Henderson, Kentucky native was once a prodigy that had the track world at his finger tips. Over the course of his high school career in the late 90s, he broke four high school national records running for Owensboro High School and was the talk of high school track and field. He won silver in the 4x100 at the World Junior Championships and earned two state titles in the 100m in Kentucky.

But grades kept him out of the University of Kentucky, and then a drug conviction put him in jail, ending his track career and erasing whatever athletic career was in store for him. While that conviction later was reduced to a misdemeanor and Casey eventually was pardoned by Kentucky's governor for his earlier missteps, it didn't re-start a life full of regrets.

He wondered what his life would have been like if track had remained a constant. College? Professional? Maybe World Championship or Olympic success? In his final year of high school, Casey's 60m time of 6.57 was competitive on the World stage.

Out of prison -- he was there for 60 days -- and looking ahead, he began to settle into his own life. Eighteen years ago, he married his wife Nisha Green. He had two daughters. When King was born in 2007, he was given a second chance to cultivate a better path for his son.

Right around the age of three was when King first started running.

"He could jump off couches, he had tons of energy," Casey said.

"When I was in the elevator one day, and my dad seen me get down in the blocks, that's when it started," King said. "He said, 'That's the first start.'"

Early on, Casey taught him what he knew: That you had to be strong to be fast.

Current day, King is in a different stratosphere. Casey says, without a hint of hyperbole, that King achieves 28,000 sit-ups a month.

For the last six years, Casey and his father Keith have been coaching King.

Their work hasn't gone unnoticed. Nor has the number trailing King. Six-point-five-seven is permanently tattooed somewhere between his brain and his legs.

This indoor season, King ran the fastest time ever recorded by an eighth-grader, posting a time of 7.08 seconds. But he also clocked times of  7.10, 7.11 and 7.12. He won a Kentucky middle school title.

"I try to be somebody and I try my butt off every day," King said. "What (am I) capable of? I don't care. Whether it's snowing or raining, I try to put the time to work at it and try to get better at it. It's like the drive phase. I have to get that down to be 10 times better than my dad here. My dad owns that record. I'm just waiting to get it."

It's when King begins to talk that you start to understand the similarities between him and father.

He owns the same southern drawl, that melodic twang that pulls you in and then spits back a series of dramatic statements. Out of Casey's mouth recently:

I used to put my uniform on at night and visualize how I would destroy my competition.

Much like his father, King has already learned the gift of a quote, too.

"When you run with me, I'm ready," he says. "Because I'm just ready for you. I'm going to eat you  up and I'll let your whole family know, I'll let your coaches know, that's what I do. Because my dad, he's the same way. He gave it to me. I know what I"m going to do to them boys." 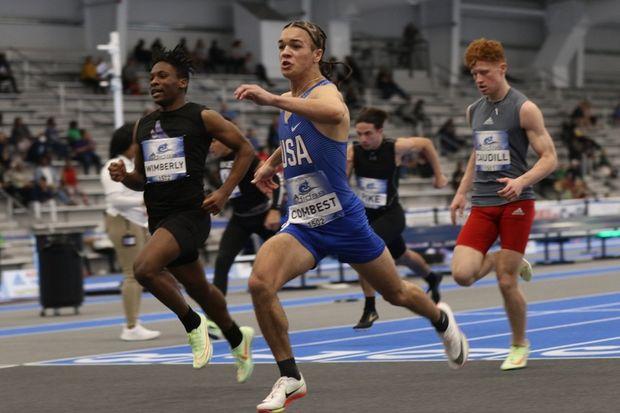 King, of course, has yet to even reach high school. Four years from now, he could be a completely different athlete. That's how development and progression goes.

But Casey has implored his son to stay hungry, to never let go of that feeling of want.

"I told King, life is a fight," Casey said. "No matter where the journey takes you, you just have to go after what you're chasing."

"When you run with me, I'm ready. Because I'm just ready for you. I'm going to eat you  up and I'll let your whole family know, I'll let your coaches know, that's what I do. Because my dad, he's the same way. He gave it to me. I know what I"m going to do to them boys." -- King Combest

While Casey's national record remains unbeaten, perhaps the more pressing matter for a developing young mind would be that of the areas where he failed to reach his potential: In school, where a promising future is co-dependent on one's ability to also succeed in the classroom.

"He's going to the more supreme version of me," Casey says.

There's also the added benefit of a well-rounded resume, from the 100m to the 200m. Could King run a solid 400m? College coaches are looking for versatile athletes who can contribute.

"My mission is to help my son," Casey says. "To let him be happy. I've told him, 'If you don't want to run track and want to shoot pool, that's fine.

"But I'll tell him, 'We're going to be the best damn pool players out there.'"

Anything is on the table for King, then.

But perhaps it always comes back to the record.

And for King, to truly move on from his father's legacy, maybe he has to overcome the 60m first.