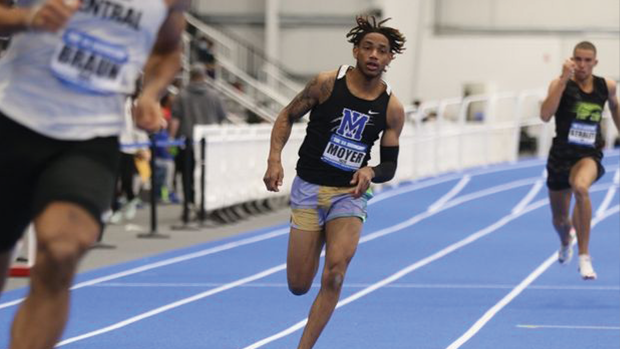 * Mountain Island Charter's Trevin Moyer is among the top sprinters in the U.S. in 2022

Trevin Moyer wanted a place where he could develop with peers just like him. He envisioned a future where his teammates would become his brothers.

So when the Mountain Island Charter (NC) athlete arrived on the Arizona State University campus this year for his official visit in Tempe, after a handful of zoom calls with coaches and potential teammates like Jalen Drayden, Justin Robinson and Jamar Marshall, a part of him already was enamored with the idea of the Sun Devils.

All he really needed, he felt, was validation that it felt right.

"Seeing them all in person, they were the same way," Moyer said this weekend. "They showed the same love. It was a combination of things. It was everything."

Arizona state was his second official visit, and then his last. He knew pretty much after that.

On Saturday in front of friends and family, Moyer, the No. 48 ranked recruit in MileSplit's Class of 2022 rankings, announced his decision to join the Sun Devils in the fall.

In turn, it was a big win for Arizona State Director of Track and Field Dion Miller, who in recent years had signed the 44-second quarter-miler and World U18 400m record-holder Robinson -- who took a gap year before enrolling -- along with Marshall and Drayden and Austin Kratz.

The Sun Devils are not far off from making a statement. In the most recent USTFCCCA coaches poll, the program was ranked at No. 24.

Moyer narrowed things down to two in the end. He took his other official visit to Ohio State. In previous weeks, he also considered Southern California, North Carolina A&T and Auburn.

The North Carolina native said he was impressed with the Sun Devils' versatility, as the roster was stock full of individuals who could compete across a variety of events.

"They are really on the come up," he said. "I really liked how they formed their program. When I talked to their coaches, they said mostly everyone on the team can run the 1-2-4. And I liked that, because I'm versatile. I felt it was a great fit."

Indeed, Moyer is an athlete capable of driving up and down the distance ladder.

But other things attracted him to Arizona State, too, such as their leadership endeavors.

"They have a program called the Black Student Athlete Association," Moyer said. "It's for Black student-athletes and it's a place where they come together and talk and get to know each other more and also do things in the community. They do things like food drives, too."

And so, what encouraged him beyond the track was his development as a person.

Having rose through the ranks over the last few years into an elite track and field athlete, he said he is keenly aware of its ups and downs.

"I've worked so hard for this moment all my life," Moyer said. "I always told my mom, ever since I was 11 or 12, 'You don't have to worry about me, or about paying for college. I'm going to do it big. It was always a big goal of mine to make sure I went Division I in track and made sure my parents don't have to pay a dime for school. So it was a big relief when I announced it and let everyone know that I did.

"It's a lot of hours, a lot of time, a lot of injuries, a whole lot of adversity that you have to go through to get where you want to be. All of that shaped me into the man I am today."

He will finish his indoor season at adidas Indoor Nationals.