, had a moment of uncertainty if she wanted to continue her athletic career in college. After speaking to her mentors, she decided that she would continue this journey at Harvard. During the 2017-2018 season, she became the first Ivy League athlete to make an indoor NCAA sprint final and win an indoor national championship title, while breaking the indoor 200m collegiate record with a 22.38. Thomas decided to forgo her senior year of eligibility and was announced as the the first female sprinter to be sponsored by New Balance. She finished her collegiate career as an eight time All-American and 25-time All Ivy League athlete.

"I know the top track programs aren't recruiting you now, but one day they will wish they did." Who would've thought that you'd be here, 10 years later, still running track? I guess Mom was right, after all.

Just go try it out and have a positive attitude.

You see, you have a lot of talent. You can go really far if you want to. Just go try.

And don't let the fact that you go to a prep school, or that you compete in Western Massachusetts prevent you from believing that you are one of the best.

If you work hard enough, those long evenings after school and practice, getting home at 7pm to start your homework will pay off. You'll learn to love the six-hour track meets and running from event to event.

Just believe in yourself. 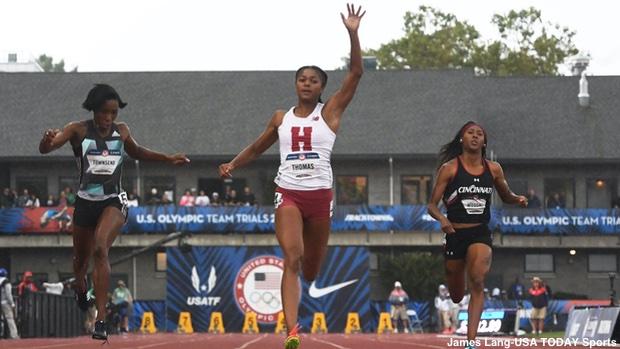 I know the top track programs aren't recruiting you now, but one day they will wish they did. You'll eventually commit to Harvard to run. And nobody now will know it yet, but you've already won.

Coach Tolbert will work with you there. At first, you're going to struggle. You're going to want to quit...probably every day. There will be nights where you break down because you were at practice from 3-7, missing office hours when you have an impossible assignment to finish.

You'll have moments where you wish you didn't run track. You'll ask yourself, "is it worth it" almost every day for those first two years in college. The answer is yes.

But each day, little by little, you will grow-as a better athlete and a better person. At Harvard, you will find passions outside of track, but ultimately you will grow to love track more than you imagined you would.

And I know you're not the typical Division 1 sprinter. You didn't run club track, you're from New England, and you ended up going to Harvard.

And for a while, you'll feel alone. Because you are doing something special.

But when you get to track meets, don't worry about the other girls' uniforms or who they run for. It doesn't matter where they go or what they've done, because you can compete against anyone. You're built to do everything you want to do. You can win any race. You can win a championship. You got this.

Just because it hasn't been done before, doesn't mean you can't do it.

You'll fall in love with the process and strive to get better every day. You'll work together with Coach Tolbert and become one of the best athletes in collegiate history. You've always been a hard worker, so that won't come as a surprise to you.

One day, you'll wake up and be a Professional Athlete. You'll see that investing and believing in yourself all this time was worth it.

Because just like a race, it doesn't matter where you start, it matters where you finish.