One thing was for sure in 2019: Quincy Bonds was not afraid to compete at the NIAA Class 4A State Championships.

When it came to the sprints, the Centennial (NV) High School junior had the versatility to compete for state titles in the 100mH, 300mH, 100m and 200m. That was nothing new, either. Over her high school career, she made the outdoor state championship finals nine times, starting first in her freshman year in 2017.

But during her freshman season, she was just getting started:

Her sophomore campaign saw her win her first state title, though she added the 100mH and the 200m events into the mix:

In 2019, as a junior, she became a two-time hurdle champion:

It wasn't uncommon to see the Centennial High (NV) student-athlete competing in various events and dominate. And she did so with some pizzazz, too. When she won her first 100mH state title a year ago, she did that with magenta hair. From the starting blocks, Bonds started her race aggressively. She was one of the first athletes to the first hurdle, despite the pressure from three other athletes. Bonds continued to focus on her lane and the nine other obstacles ahead of her.

As the race continued, Bonds continued to excel down the track. 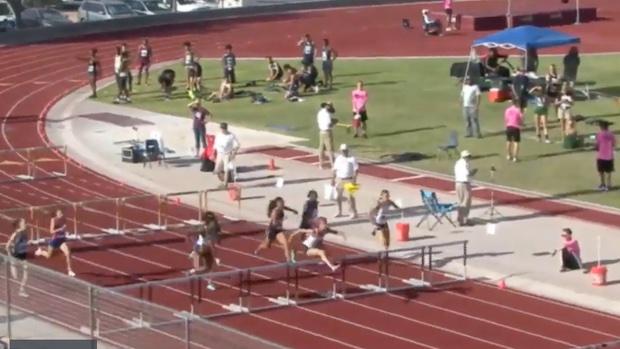 By the seventh hurdle, the motive changed: It was Bonds versus the clock. She cleared all 10 hurdles before crossing the finish line in a personal best of 14.25 seconds.

As Bonds hurdled her competition, this standout Nevada athlete was not afraid to compete in the pole vault and the decathlon at the Great Southwest as a freshman. Yes, the decathlon. We caught up with Bonds in 2017.

In 2017, Bonds high jumped and threw the discus, javelin and shot put for the first time. Despite not having much experience she stepped up to ring and bar and used the opportunity to try something new. Retrospective: She could follow her sisters' footsteps at the collegiate level. Tiana, her oldest sister, just finished up her final year at the University of Arizona. Her middle sister, Talie, is at Utah State. And her youngest, Zoey, is just a sophomore at Centennial. With personal bests of 14.25 in the 100mH and 43.71 in the 300mH, she has the potential to excel on the track at the college level. But Quincy also has a soccer background, too. It will only be in a matter of time if she decides to compete at a university of college of her choice in the fall.