Calling Tamari Davis a phenom would not be hyperbole.

It only begins to describe the 15-year-old-sprinter from Florida who began setting national and world age group records at the age of nine years old before proceeding to flourish in her first year in high school.

Among other wildly fast efforts in 2018, she ran a wind-legal 11.13 seconds for 100 meters in a professional field at the Star Athletics Invitational in June, earning a share of the national lead, a freshman national record, a US No. 4 all-time mark and a 15-year-old World Age Group record.

Just a month previous to that effort, at the Florida Class 3A Championships, Davis ran a wind-legal 22.48 seconds for 200 meters, beating in-state sprint rival Briana Williams to win her first state title while setting her first world age group record of the year.

Williams, by the way, went on to win two golds in the 100m and 200m at the IAAF U20 Championships for Jamaica just a few months later in Finland -- and she'll be a high school junior at Oakland Park Northeast High School in 2019.

So Davis rewriting the record books in her first taste of high school competition as a freshman at Gainesville High School wasn't a surprise.

But her sophomore season will see her move to Oak Hall, a small private school in Gainesville in Class 1A.

"I really was surprised with my freshman year," Davis said. "Me and my coach stayed with our normal training cycle. Coach stays with the game plan regardless of the meet."

Now Davis has a chance to up the ante. Since 2016, she's chosen to compete over the indoor season, last year winning national titles in the 60m and 200m at New Balance Nationals Indoor.

Davis' coach, Gary Evans, said the plan in 2019 is to open up in Alabama. For the third straight year, she will compete at the USATF Indoor Hoover Alumni Invitational on December 29. Evans said Davis could compete in more meet in January and February and then peak for NBNI in March.

"I would say winning the 60m at New Balance Indoors last year may have been the highlight of my freshman year because I'm not known as a starter and to hold off those great athletes was a blessing," Davis said. "That was a great accomplishment for me knowing that we don't do indoor track in Florida and that I only do three indoor meets before the New Balance championships."

Evans is a professional coach who currently works with the likes of Justin Gatlin, Steve Gardiner and Omar McCleod. At the prep level, he's worked with Auburndale graduate Chauncy Smart (University of Miami) and his son Tariq Evans (Liberty University).

But as fate would have it, Evans met Davis when she was seven years old. He's coached her ever since.

"Letting her practice with the professional athletes sometimes makes her straighten up and push more in practice," Evans said. "But we also do things like tag and flag football in practice as a team to have fun, but also still get in some running."

Competing at such a high level at such a young age can certainly take its toll on an athlete. But while Davis treats the sport like a future occupation, she says she finds a balance of life on and off the track.

"My coach keeps it fun for me," she added. "He doesn't put pressure on me if we go to a meet, we go. If we lose, we lose. He always tells me once you go to college or turn professional then it becomes a business. Always hanging around my friends and running relays makes it super fun."

Her main training partner is 30-year-old Semoy Hackett, an athlete for Trinidad and Tobago who was a member of the country's bronze medal 4x100m relay at the 2015 World Championships.

Both push her on longer runs.

"Coach always tells the group 'Train in silent. Kick butt in public,'" Davis said. "No one needs to know what you are doing everyday in practice. I only train three days out the seven day week and it's all grass. Coach say we won't start any speed stuff until the last week in February or first week in March, just like last year."

With all that said, Davis' phenomenal freshman season set a high bar.

So when the outdoor season arrives, she's got even bigger goals. Evans said Davis will open with the 200 meter dash at the Bob Hayes Invitational and then will lace up for a full effort in the 100m at The Florida Relays in Gainesville.

The main focus, however, will be on the USA Senior Trials in late July. Davis will be 16 years old, but both believe the sprinter could be ready to compete with senior sprinters.

"I want to run sub 22 and sub 11," she said. "I know that's far fetched, but you have to have a purpose your running and a dream to chase. Coach says that athletes like me come along every 10 years, their are things he see in me that are special."

Her goals for 2019 are lofty, but definitely not out of the question. 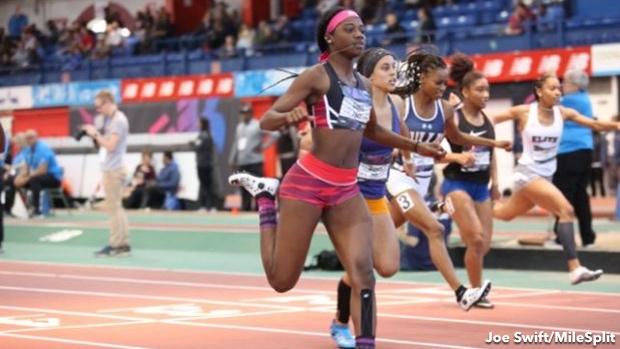