SAN DIEGO, CALIFORNIA -- History one day will list Katelynne Hart as a two-time runner-up of Foot Locker Nationals, but it won't explain just how she got there.

Because it's one thing to have stolen a second-place finish in the final seconds after a swoosh of a kick, but it's quite another to have put every fiber of your body toward one singular cause, to have fought and clawed and clenched your teeth with every step, and to have come up just short.

It won't explain just how different those two races, from Hart's sophomore to junior seasons, were.

History will also one day list that Sydney Masciarelli's breakthrough race came at Foot Locker Nationals in 2018, that in her first cross country season she became just the second girls athlete since Jordan Hasay in 2005 to win a national title in her debut.

But it won't tell you just how she did it. It won't explain how she was in the middle of the pack at the start, or how she rocketed up the hill on the first lap to position herself in second, or how in the final moments she channeled memories of youth to help push her to the line. 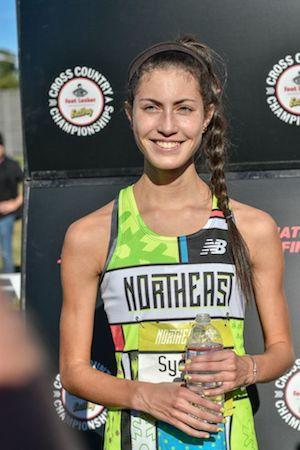 It will only have her name next to the No. 1 finish, and it will list a time.

But these two performances on Saturday will be interconnected for a long time, and not just on paper, but in the lore of those at Balboa Park. What went down this weekend was one of the most exciting finishes in Foot Locker Nationals history.

But that finish was the product of a long game of cat-and-mouse. Masciarelli only really pulled Hart into her orbit in the final meters, and that's when her basketball instinct kicked in.

"Growing up in a competitive household with all my siblings prepared me for this moment," Masciarelli said. "Training with my twin brother (Salvatore), I've always tried to beat him in workouts. I pictured that in my mind coming down and I just pushed really hard."

Seventeen minutes earlier, though, Hart decided to go hard on the gas. She led from the start.

"I wasn't even sure I was going to do it," Hart said. "I was battling with Emily [Covert] and Taylor [Ewert] down the first stretch. I took the inside lane. I went out and nobody came with. I said, 'I guess I'm going to take the lead.'"

It takes some real heart to stick with a plan when you know it's going to hurt. But Hart remained committed to the move and didn't back down.

"I was trying to compartmentalize the race," she said. "I told myself, 'If I can just get the bottom the second time I go up the hill, I know I'll be able to carry myself and be able to give it everything I had.'"

Masciarelli made up major swaths of ground on the hills. Hart powered hard on the downhills and in the flat sections.

By the time the pair were even with 100 meters to go, it was an all out sprint.

"I haven't had to push that hard in any race really," Masciarelli said. "And throughout the whole race, I had to push harder than I would normally have to."

From Champ To Hardwood:

The sophomore admitted after her win that she was ready to get back on the court for basketball season. The 5-foot-10 athlete isn't just an elite runner, but she's also a developing hooper.

"Monday I'm going to try to go to practice and this whole next week," she said. "We have a game on Friday and Saturday, so I'm excited to play in that."

Admittedly nervous of her first national race, and a bit speculative of how she would stack up against the country's top runners, the runner from Western Michigan Christian entered Foot Locker Nationals with apprehension.

And then she absolutely crushed it.

It marked the second straight year of a Michigan athlete placing third at the race (Olivia Theis). It was Vanderkooi's 16th race of the season.

After injury prevented her from qualifying for a national meet in 2017, Winona Cotter (MN) sophomore Grace Ping qualified for both NXN and Foot Locker Nationals in her sophomore campaign.

It came after a successful regular season that saw Ping--a two-time All-American at NXN as a middle schooler--win her second state Class A title in three seasons, and saw huge gains in both overall PR (17:10.80) and the way she competed.

But her national appearances were a learning curve.

"I definitely thought I could have been a little better, "she said. "Maybe even a lot better. But I have time and it's important to just focus on little progressions. Even though placement wise I didn't progress, I did PR at NXR. I'm happy with that."

Part of Ping's plan was the added responsibility of preparing for both races. In time, she said, the results will come.

What a difference a year made for Abby Loveys.

The Randolph (NJ) senior finished 33rd as a junior at Foot Locker Nationals in 2017, but it was then, she that, where she felt an unease of being within the country's elite runners.

"I think for myself. I didn't feel very comfortable being here," she said. "I thought everyone else was so much faster."

A breakthrough win at the Manhattan Invitational's Eastern States race in 2018, coupled with wins at New Jersey's Meet of Champions and the Group Championships, though, answered her concerns this time around.

This time, she said, she felt like she belonged. She followed with an 11th-place finish in 17:48.40, and in the beginning stages even threw down a fast first 800 meters with the leaders.

"Coming a second time, I was able to handle it better," she said.

"Growing up in a competitive household with all my siblings prepared me for this moment. Training with my twin brother. I've always tried to beat him in workouts. I pictured that in my mind coming down and I just pushed really hard." -- Sydney Masciarelli, 1st place

"I think I had a lot of expectations going into NXN. It affected a little bit of me going into the race. So honestly after NXN I was obviously super disappointed. This week, I did my best to go. I had to come to Foot Locker and run happy and remember the reason why I fell in love with cross country. That really helped me today, loving the battle. That helped me have a great race." -- Katelynne Hart, 2nd place

"I was terrified. I was really nervous. I have raced competitively against people twice, so it was a new thing I guess you could say. It was really scary. I did a lot of praying. God really, really helped me. I just had to think I could do it." -- Abby Vanderkooi, 3rd place

I'm beyond happy. I'm so grateful to come off a third-place finish last week and come into another group of talented ladies and place fourth. It really puts a stamp next to me as to where I am in these rankings. I'm super happy for the experience." -- Taylor Ewert, 4th place

"I knew coming into this race that God had a plan for me. I was going to race my best race. There will be moments you won't be feeling well. There will be times you'll feel pain. You just have to push through it. Because this sport is all about adversity and it's all about testing your limits." -- Emily Covert, 5th place