SAN DIEGO, CALIFORNIA -- To understand how crazy this cross country season has been for Foot Locker Nationals champion Cole Hocker, you have to go back to this time a year ago.

Consider all the near misses for the Indianapolis Cathedral (IN) High School athlete.

He was second at his semi-state race in 2017. He was second at the Indiana state championships. He was completely out of the running for a Nike Cross Nationals berth, and then he was just five places shy of moving on to Foot Locker Nationals.

Consider what that may have felt like. That an athlete who believed in his ability to compete with the best in the country -- really, even the best in his state -- simply didn't get an opportunity to show it.

That's the origin story of where Hocker's drive took him in 2018.

Much of that work was behind the scenes. You couldn't see it. You didn't hear about. But Hocker's championship aspirations formed long before he finished second at Nike Cross Nationals and first at Foot Locker Nationals.

And then came the season. 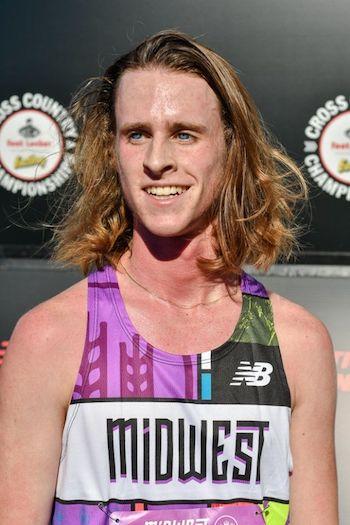 There were victories first in Indiana's qualifying rounds, and then at the state championships, and then at NXR Midwest and Foot Locker Midwest.

Validation took the form of these wins.

But racing hard and racing long often takes a toll, too. During that vital stretch run of national races, he zoned in for a month straight, trying to ease the pressure he sometimes felt to perform.

He raced nine times even before NXN and Foot Locker.

"These past four weeks have been really fun but also really stressful," Hocker said after his win on Saturday at Balboa Park. "I think all the other runners can relate to that. There's a lot of pressure on us to perform a lot, especially at these big levels."

But Hocker proved just how strong he was. He was a finisher.

In the last 400 meters at NXN, he took to the hills in Portland and closed hard for second-place, out kicking Valor Christian's Cole Sprout for a time of 15:00.90.

And then on Saturday, after putting himself in position throughout the race -- looking confident, comfortable, and zoned in with each small move being made -- he did the same with about 300 meters to go at Balboa Park, executing his patented close past Knoxville Catholic's Jake Renfree for first in 15:13.70.

"I don't get out kicked very often, but he got the best of me today," Renfree said.

"I've been emphasizing these past two races my whole season," Hocker said. "And you never know how the race is going to shake out. I felt it out there in the first mile. I was confident in my position. Just sort of settling in there halfway through and really pushed the last loop we did."

Hocker was no surprise national champion. You can argue he was the most dominant runner in the country in 2018.

But there's little doubt his path to a title at Foot Locker in 2018 was driven by a desire to prove he was the best.

By Saturday, he had put the finishing touches on a remarkable year of wins.

For the second straight national race, Josh Methner proved he had the cojones to make a big move.

The Hersey (IL) High School junior, who finished sixth overall in 15:27.40, once again made two significant moves during Foot Locker Nationals that yielded him returns by the finish.

The first surge came at the 800 meter mark. Methner began to push the pace and moved to the front, which forced other runners to begin positioning themselves around the lead and keep contact.

His next move came just after the field's first go at the downhill, and Methner grabbed the lead once again around the 7:15 mark -- much like he did at Nike Cross Nationals -- which urged the front pack to pick up the intensity, only this time it was more urgent.

"I feel like I did great," he said. "I made a move when I saw my coach. He just told me to get the wheels rolling. So I picked up the pace a little bit."

A Story Of Redemption:
Drew Bosley waxed on Friday that "Last week is part of the story for tomorrow."
It was easy to see what the Homestead (WI) High School senior meant.
After finishing seventh in back-to-back national races as a junior last year, he set higher expectations for himself in 2018.
In some ways, he put all his year-end goals into NXN and Foot Locker. He even admitted weeks earlier that after his regular season ended in Wisconsin that an entirely new season began.
While that pressure focused Bosley enough to be ready, he staggered down the stretch at NXN, finishing in 23rd place. It was a difficult moment.
"I was so focused on the result, and sometimes I had weak parts in the year emotionally," he said.
But it forced the Northern Arizona University signee to reset and ask another question. 'Is it about winning, or is it about giving it everything I have?'
Bosley answered his concerns a week later and found his redemption at Foot Locker, closing strong in the final seconds to earn a fifth-place finish in 15:25.40.
"I just wanted to be the toughest person," he said. "whether I was in the front of the race or back. I'm just so happy with how I finished and how I handled the situation. I think this race, this season in general, it taught me how to be a better person. These lessons, it's more than running."

But the soon-to-be Harvard athlete took notes from South Region returners, and carved up a plan for Saturday that worked flawlessly.

"I talked to a lot of the South guys who were returning," said Baker, who was eighth overall. "They said how you have to watch out for that hill the second time around. I saved a lot of energy knowing that would be the deal breaker in whether I would be All-American. I think I saved enough."

The Small Margins That Exist In Championship Racing:

After finishing sixth as a junior, the Notre Dame signee had hoped to compete for a top five finish on Saturday at Balboa Park.

Though while Cheeseman didn't get the race he desired, he still closed strong for 10th place in 15:36.60.

And he said the lessons gleaned from this kind of championship racing is vital moving forward.

"Especially in this race here," Cheeseman said. "It's pretty narrow. You have to be up at the top, which is where those moves are made and gaps are put in. I could see that happening in front of me. I wasn't able to respond, but it's just how championship racing goes. It's little moves, surges from the top guys throughout the race that really separate first from second and on down the line."

"You never know who's going to make a move and where they're going to do it. Definitely, people made strong moves. I think I was able to match up. As long as I didn't get separated from anybody, I knew I would be good finishing." -- Cole Hocker, 1st place

"I was like, 'Wow. That was crazy.' It was such a fun race. It hurt a lot, but it was incredible. It's something I'll never forget." -- Carter Solomon, 4th place

"Two and a half minutes left, that was it. I took the lead and had some momentum. I faltered a little bit. He zoomed by me and I tried to do everything I could. I wasn't getting it. That's OK. I don't get out kicked very often, but he got the best of me today." -- Jake Renfree, 2nd place

"I felt like the pre-race interviews, some of the questions I was being asked, I felt like people didn't expect much. So just to try to come out and prove I had more to give." -- Graydon Morris, 3rd place

"I'm really happy I was there the whole race. I was sitting there. I had a shot. That's all I could ask for. I ran tough. I didn't leave anything out there. It was a fun day. It was a really, really hard day." -- Drew Bosley, 5th place