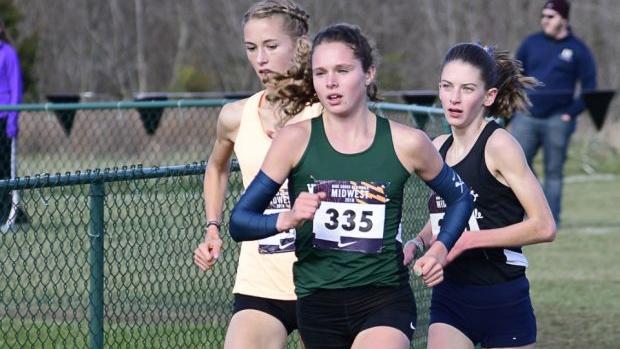 Katelynne Hart felt all of these things on Sunday at the NXR Midwest Regional in Terre Haute, Indiana, and those strengths played to the Glenbard West (IL) High School junior's advantage as she won her third straight title in 17:14.90.

Sunday's effort was another reminder that the Illinois prep is ready to go during championship season.

"My goal was to stay relaxed and use the last hill and finish strong," Hart said. "That's how I did today. I'm happy with how it went."

There's no doubt the experience Hart's gleaned over the years is already playing a crucial role and in a measured approach. With the finish, Hart earned her third straight Nike Cross Nationals berth and remains among the top candidates to vie for placement at the meet. She'll head to the Foot Locker Midwest Regional on November 24 hoping to qualify for Foot Locker Nationals as well.

The time at Terre Haute marked a 14-second improvement from last season, though it was four seconds shy of her freshman best of 17:04 in 2016.

Beyond Hart, Naperville North's Alex Morris had her most impressive race to date, finishing second in a career best time of 17:17.40 while also helping the Huskies claim another team championship.

That performance by Morris, who was third at her Class 3A state meet just a week prior, was 42 seconds faster than her effort last year on this same course when she finished 10th.

And then there was Beavercreek's Taylor Ewert, who had the heart, gusto and motivation to brave a 400-mile commute following her Ohio State Division I Championships on Saturday with another performance less than 24 hours later in Indiana.

She finished third overall in 17:33.7, but more impressive afterward was her answer as to why she felt the need to race when a potential at-large could have been granted her way based on new NXN rules.

"I think it's a thing of respect," she said. "If I feel adequate enough to race, I'm going to race. And since I did qualify, someone else who may not be in this position could get an at-large bid since I got mine."

Greencastle (IN) senior Emma Wilson was fourth overall in 17:41.8, while Batavia freshman Katrina Schlenker and Rosary freshman Lianna Surtz were fifth and sixth, all grabbing bids to NXN.

In the team race, Illinois swept up positions out front.

As could continue at Nike Cross Nationals when these two teams line up for the sixth time this season, Naperville North defeated Yorkville by 15 points, scoring 69 points across an 18:14 average.

Led by 14th-place Kailey Fox, Yorkville followed with 84 points and an 18:25 average.

Both teams, however, have proven enough over the season that they could be real players on the national scene.

Interestingly enough, third-place Downers Grove South could be in line for an at-large considering the team's resume. If not for Naperville North or Yorkville, this club would compete with largely any team in the country.

At the Roy Griak Invitational, for example, DGS finished third, defeating fourth-place Wayzata and fifth-place Saint Michael Albertville. Those two Minnesota teams, along with Edina, were 1-2-3 at NXR Heartland on Sunday.

So DGS has a decent argument for placement at NXN. But so goes the at-large journey, a sometimes wild road before November 24.

2. Wild Race In The Boys Championship

Early indications projected the boys championship to be a potentially chaotic race, and those visions weren't far from the truth.

Arguably the best storyline was the team race, where there was a small favorite and then a host of teams vying for the second automatic berth.

That meant Hersey High School (IL), which had finished second at its Class 3A Championships in Illinois a week previously, had one of its best races of its season, scoring 146 points to out pace Wheaton Warrenville South by 3. York (IL) finished third overall with 156 points, while another Illinois team, Naperville South, was fourth with 162.

In the individual race, Indianapolis Cathedral (IN) senior Cole Hocker took home his second championship in as many weeks, earning the victory at Midwest with a time of 15:06.4 following his title in Indiana on Oct. 27.

Hersey's Josh Methner, racing just a week off his own state championship in Illinois, was second overall in 15:12.1.

But from there, things got interesting.

With spots up for grabs, it was a race to the finish.

Saugatuck's Corey Gorgas, who was the only Michiganer to qualify for NXN -- not arguably the three fastest guys in the state this year (Alex Comerford, Carter Solomon and Nick Foster), who didn't race -- punched his ticket, while Ohio's Vincent Mauri found redemption after his fourth-place finish at state.

York's Ethan Kern was fifth overall in 15:24.7, while Ohio's Ryan Adkins got in by virtue of Methner's team qualifying.

Noticeably absent was Middletown (OH) senior Conant Smith, who was eighth at NXN last year and a winner at Ohio's Division I championships a day earlier.