EAGLE, IDAHO -- Kamiakin's first moments in the championship boys race at the Nike Cross Northwest Regional on Saturday at Eagle Island Park saw its No. 2 runner get spiked just 100 meters into the race.

"Had I not kicked off the spike, I felt like I would have spent too much energy trying to put it back on and wasted some useful energy," said the junior Smith (pictured, below), who finished sixth in the Class 3A Championships in Washington a week prior.

But Kamiakin was ranked No. 12 in the country for a reason.

A minor setback like a lost shoe wasn't going to predetermine the Braves' national aspirations.

After all, this was the same team who had finished second in the Northwest Region last year. This was the same group that vowed not to cut its hair all season for the fear that it would ruin its streak of winning. 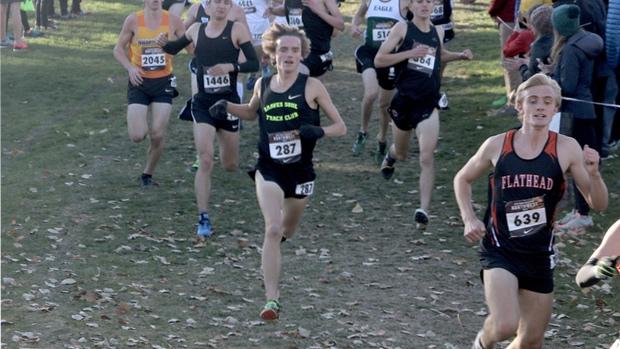 This was the squad who substituted a member of its lineup on Saturday in virtue of another, the same program that had asked so much of its athletes in critical moments.

Kamiakin was having none of it.

"A lot of things we've been doing for this whole season have been for each other," said the senior Ryan Child, who worked out front as the team's No. 1." And just taking a step back and running for each other, that's what makes the dream work."

Turns out, all that positive chi came in handy as the Braves scored 86 points to withstand a difficult early draw, netting a narrow 5-point win over defending champion Central Valley (91). Kamiakin was just six points ahead of Lewis And Clark (92), too.

Porter Grigg came through in 26th, while Smith battled back and was right behind his teammate in 27th. The team's next two teammates, including a freshman who said he "had no idea what he was doing half the time," were in before the 60th pole, netting crucial finishes.

"There was a ton of pressure for us. Just going into the race and being No. 1, there's a lot of pressure," Child said. "There have been a lot of teams like us before and haven't made it back to nationals. We just wanted to make sure that we could prove that we weren't that team and that we are the No. 1 team and we would be dominant today. I hope that we proved that we did. Even through all the setbacks, we still drives through and pushed for each other."

If nothing else, Child added, Kamiakin's all-for-one attitude was sparked by the motto, "For The Boys." 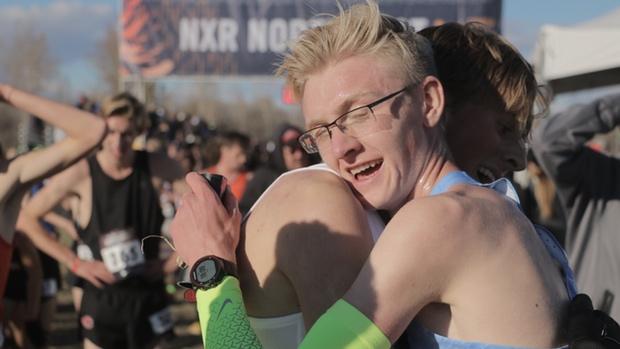 While an epic team battle unfolded in the final moments, the individual race saw a familiar championship tone.

For many, the tone was obvious.

Let's wait long enough to make a move, and then trust in myself enough to beat everyone to the line.

But that decision proved fruitful for some and less so for others.

Holland ultimately snapped the pack of runners out of their malaise with one mile to go, hitting the gas for reasons he knew all too well.

"I know that I'm strong and that I can draw it out over a mile or over three miles," Holland said. "My kick is good. But that last 50 meter kick, it just isn't really there for me. So I knew with a mile to go, everyone is leaning back.

"I just bolted, put a surge in and broke the field a little bit," he said.

The win for Holland in 15:10.40 was especially significant, too. Just last year, the Ashland junior had dropped out of the race.

But 2018 was a much different year for Holland, who dropped three sub-15 performances this fall and won his first outdoor cross country title in Oregon in Class 5A.

Holland believed had had what it took to win.

The race for a national qualifier following Holland's move, then, became priority No. 1 for everyone else.