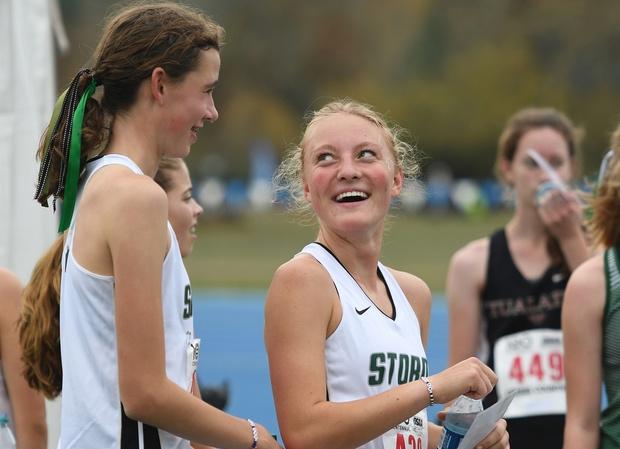 The No. 1 girls team in the country lived up to its billing on Saturday, putting forth a crucial effort against a known rival.

Bend Summit, which moved up to 6A this season, defeated No. 7 ranked Portland Jesuit for the second time this season and for the Class 6A title, earning the win at the Lane Community College Course in Eugene. It was the team's 11th state title in school history.

This mirrored an earlier effort on Sept. 8 in Monmouth when the Storm dispatched Jesuit 22-51 at the Ash Creek XC Festival.

"This season has been such a journey with my team," junior Fiona Max told the Bend Bulletin afterward. "They're the most caring, thoughtful, joint group I've ever been a part of. It's amazing to take that title with them, knowing that our whole team has put our blood, sweat and tears into it."

A week away from the Nike Cross Northwest Regional, the Storm looked as good as ever and seem on pace to claim an automatic bid for Nike Cross Nationals in one of the most talented regions in the country.

But Jesuit's girls gave Summit a run for their money.

As Max broke free of the lead on the last hill and scored her first state title in a finishing time of 17:29.00, the Storm compiled an impressive performance overall, scoring their first five runners in the top 14 places and their top seven in the top 30. Summit's seventh varsity runner finished ahead of Jesuit's fifth.

And it was Summit that capitalized with a winning tally of 39 points across an 18:05 average and 58-second spread.

Jesuit followed with 68 points and sported an 18:23 average. The Crusaders scored two runners inside the top 10, including runner-up Makenna Schumacher (17:43.00), while its third and fourth finishers were 17th and 18th, respectively.

Despite finishing second, Jesuit looked quite strong, finishing its top six at 19:03 or faster, but Summit's depth continued to flourish in big moments.

One of Oregon's top runners all season, Portland Lincoln's Kyla Becker, was third overall in 17:50.00.

2. While the Class 6A Girls race had national implications, so did the Class 5A boys race. Evan Holland, ranked No. 24 on the MileSplit50, picked up his first state crown in 15:30.00 in a dominant race that saw him take control early in a 17-second win over second place Jantz Tostenson.

Holland has won all six of his races in 2018 and looks to be a contender at the national level as he prepares for the NXR Northwest Region next week. Earlier this year, Holland secured a PR of 14:53.20 at the Warner Pacific Classic and then followed 11 days later with a time of 14:59.00 at the Midwestern League Disrict Meet.