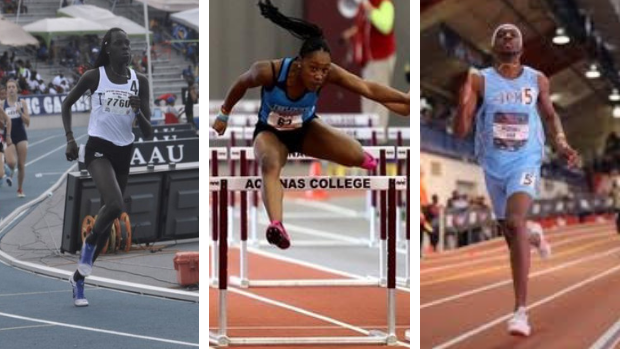 One down, one to go for Nicholas Ramey, Athing Mu and Grace Stark.

The American teenagers moved on to the finals of their respective events after racing well in the first round on Thursday at the Youth Olympics in Buenos Aires, Argentina.

Seven Americans were picked to represent the United States in the Games, which are held every four years. Over 200 countries and 3,500 athletes will compete over the 12-day event, which began in 2010.

On Thursday, White Lake Lakeland (MI) senior Grace Stark had the best performance of any American, winning her 100mH heat in 13.31 seconds.

Trenton Central (NJ) junior Athing Mu was fourth in the 800m semifinals, finishing in 2:08.01. She'll go up against Australia's top young mid-distance talent, Keely Small, in the finals on Sunday.

Brookwood (GA) senior Nicholas Ramey was second in his 400m heat, posting a time of 47.60 seconds. In the girls 400m, Provo (UT) senior Meghan Hunter was ninth overall in 56.83 seconds.

In the boys high jump, Apex (NC) senior Charles McBride cleared 2.05 meters (6-8.75) to finish eighth in the opening round.

Two Americans have yet to perform. Mifflin County (PA) senior Skylar Ciccolini will debut in the girls javelin on Saturday, while St. Mary's College (CA) Malcolm Clemons will compete in the long jump on Friday.