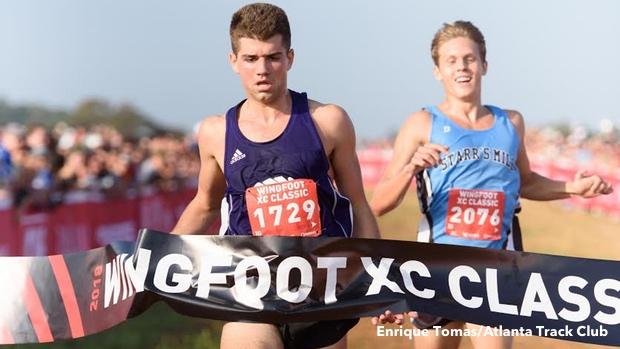 While Harkabus was just able to hold on to the individual title, Brentwood Academy of Tennessee became the first out-of-state team in the race's four-year history to win a varsity championship.

Over the final 400 meters, Nyman proceeded to stalk down Harkabus and was on his shoulder as they crawled up the steep incline into the race's final turn.

At that moment, just at the 3-mile marker, Nyman absolutely blew past Harkabus, stunning the East Coweta junior who hadn't seen him come up from the chase pack with an explosive kick. Nyman put two strides between him and Harkabus with just under 75m to go, but Harkabus showed incredible resolve, displaying his 1:52 800m speed, and matched the move, surging dead even with Nyman with 25m to go and setting up a dead sprint to the finish at Wingfoot.

Over the final strides of the race, Harkabus edged into Nyman's path just as the senior's powerful move began to fizzle out, allowing the Georgian to narrowly edge him out at the finish to take the win by fewer than four tenths of a second.

Gizelbach finished nearly nine seconds behind in third place, showing just how impressive a move Nyman had made to close the gap on Harkabus and set up the photo-finish.

Moments after the race, Harkabus remained stunned at how what was seemingly his race had turned into a victory that he snatched from the jaws of defeat.

"I don't know," he said when asked how he was able to outlast Nyman. "He surprised me. But I just used all I've got to try and get the win. Harkabus remains undefeated during the 2018 Cross Country season.

Girls Race Recap:  In a tactical, intelligent, race, Niki Narayani of the Webb School of Knoxville (TN) came into Georgia and surged to an efficient win in 18:12.4. Marietta's Ellie Hall finished in second place, leading her Marietta High School team to a resounding victory in the Varsity Girls Championship Race, while Science Hill freshman Jenna Hutchins was third in 18:22.00.