This spring, he leapt into the national spotlight with big races at the Arcadia Invitational, Brooks PR and New Balance Nationals Outdoor.

But what may be surprising to learn is that Oosting also ran at the European U18 Championships ... for the Netherlands.

This fall, Oosting says he's looking to turn around what's been a lackluster cross country career with one final, big season.

Check out what the Massachusetts star has to say about national attention, running for Holland, and what he's looking forward to in cross country this fall on grass. 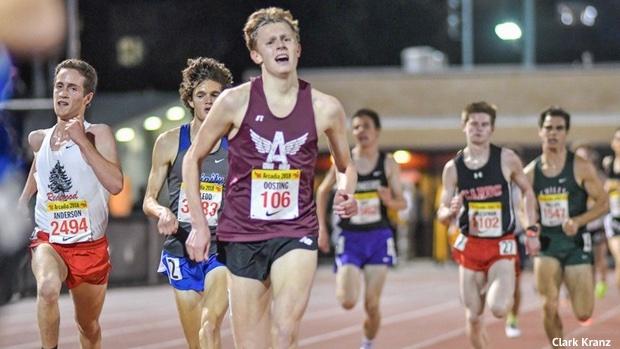 Reflecting on your track season, what goals did you have? Do you feel like you achieved those goals?

This past track season, I had a couple goals: defend my state titles, get closer to the MA two-mile state record, and defend my NBN 5K title. I did not achieve all my goals but I think I had my most successful season yet. I defended my state titles and dropped 12 seconds off my two-mile. As for defending my NBN 5K title, well, I gave it my best shot but my man Andrew Mah just ran really well that Friday night.

When you look at what you were able to do on the track what does it make you think you are capable of doing in cross country?

I think that I can qualify for a national cross country meet and that is certainly one of my goals for the season. I believe I can be competitive in any meet I run this year and I want to prove that this fall.

Oosting after the European U18 Championships

What was your experience like running for the Netherlands in the European Athletics Under-18 Championships?

That was easily the coolest thing I've done this year. I got to meet so many new friends and got to experience international racing, an experience few and far between, especially in high school athletics. Like I said in another interview, it's one thing to represent your school or your state, but it's a completely different feeling to represent your country. I really hope to be able to go back to represent the Netherlands sometime soon.

How did the opportunity come about?

The opportunity came about because I have dual citizenship with the Netherlands and the United States (my mother is 100 percent Dutch and my father is 50 percent, making me 75 percent). In April, my mother emailed the Atletiekunie (Dutch track federation) about the possibility of me competing for Holland. Then, in June, they emailed her back asking if I would like to compete in Hungary and I immediately said yes.

"To live a life with regrets is no life to live at all."

Can you break down the race?

In Hungary, I ran a 3000m, a race that I have never run before; I've run 3200m once and many two-mile races but never a 3000m race. I wasn't worried, though. I didn't know who any of these European runners were and I went in with a plan to stick up front and strike in the final laps.

The race ended up being fairly tactical (first 1600 was around a 4:42) but I stayed with the top group. A Swedish runner went out really hard but nobody went with him because we sort of knew he would soon slow down. And with about two laps left, the top pack caught up to him. I was a couple meters behind the lead pack of three runners, but I had confidence that I could reel them in when the time came. With a lap left, I still had a little bit of ground to make up. I finally caught up to the lead pack on the final curve and passed one of the Turkish runners, securing a bronze medal. In hindsight, I should have kicked a little bit earlier but I have no regrets because to live a life with regrets is no life to live at all. I was very happy with my performance.

What was the goal for that race? Was a medal something you thought was possible?

My goal was just to stay at the front end of the race and really give it my all. I believed that a medal was within the realm of possibilities and I knew staying up at the front of the race would allow me to content for a medal for sure.

What was the coolest part about that trip off the track?

I got to spend a week at the Olympic training center in Holland before we left and got to meet/see the athletes training there under Rana Reider like Dafne Schippers and Christian Taylor. I also just really enjoyed being with all the other Dutch athletes in Hungary. It was a really fun group to be a part of and I made some really good friends. 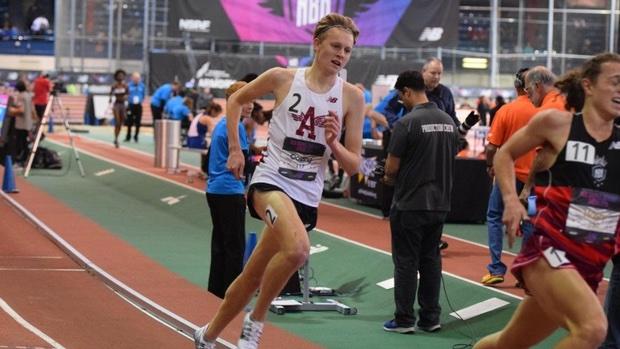 Do you think running in big races like Brooks PR Invitational, New Balance Nationals Outdoor, and the European U18 championships will prepare you for the big races this fall like NXN Region and Foot Locker meets? If yes, how so?

Yes, I think those races will help. Psychologically, Brooks, NBN, Foot Locker, and NXN are all the same. The only thing that changes is the surface we're running on. Mainly, those race experiences just give me confidence for this season.

What was it like running at the Nike Elite camp? What was your favorite part? What were some of your biggest takeaways training wise?

Nike Elite camp was an amazing experience. I think my favorite part was to be able to meet and talk with pro runners like Evan Jager and Mo Ahmed. They were really cool and they really were just living the life it seemed. As for training, I noticed that some of the guys did 40 miles per week and others more like 70 but either way, it got them to the top. It really just emphasizes that you have to do what's best for you because what works for someone else might not work for you.

What have been some of your best workouts this summer? How many miles are you running per week? What have you been doing to try to keep healthy/injury free?

After my last race on July 5th, I took two weeks off in order to allow my body to fully recover from a long year of running. I just started running again a little over a month ago and I've slowly been working up the mileage, wary of overtraining. I've had a couple little bumps in training which made me take a couple days off just to be safe, but overall the training has been going very well. In addition to rest, I've been stretching and warming-up/cooling-down every day and then lifting two or three times a week as well.

What are some of the big regular season races you plan on running? What are your goals for those races?

My team is an interesting team in that we don't do a bunch of invitationals; we just run in our dual meets and save our energy for the end of the season so we don't burn out. Staying rested and healthy is a huge part of our team. I think we will be doing two invitationals this season: Bay State Invitational and MSTCA Coaches' Invitational. Bay State is at the All-State course and Coaches' Invitational is at the divisional course so it would be wise to run on both of those courses in order to get a feel for them. 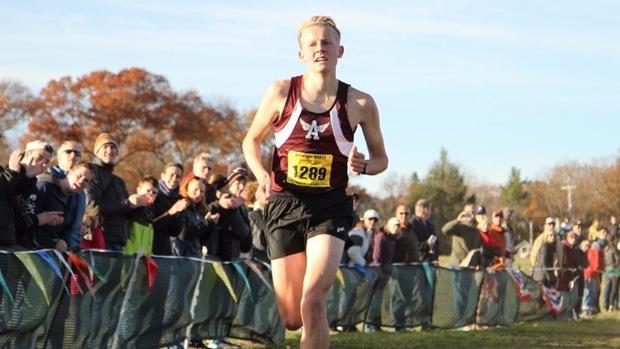 In cross country, you've won two back to back MIAA Eastern State Championships. Why haven't you run in any postseason races during the XC season?

That's a good question. It's not that I don't want to run postseason cross-country, it's that I was physically unfit to run in any races past All-States. As a freshman, I was very new to running and got injured in the middle of the season because I did not do any summer training. My sophomore year, I was running pretty well but managed to pull my adductor at the divisional meet. I still ran at All-States because the team had qualified but finished 187th and after that, I decided to take time to rest up and get healthy again. And this past year, by the means of God, I got pretty sick with mono so that didn't really work in my favor either. I ran at All-States being sick and got sixth which isn't half bad for what mono does to you, but again, my coaches and I decided it would be best to rest up and get healthy for the rest of the year. This year, I'm going to do my best to turn my bad luck around and compete after All-States but we'll just have to see what happens.

Do you plan on running at NXN or Foot Locker this season? Are you leaning toward one over the other? Would you try and run both?

I think I'm leaning towards running Foot Locker. Ideally, I would like to run both but in the Northeast region, both regional meets are on the same day, unfortunately.

Who do you see as your biggest competition this year individually and why?

I'm not sure there's just one person who's my biggest competition for this year. There's a handful of really good guys returning this year and I'm just excited to race them some more.

What are your goals both individually, and for the team this season? How do you plan on using your experiences in big races to guide your team as one of the captains?

The team goals this season are to win our league championship (one of the most competitive in MA) and qualify for the MA All-State meet. On the individual side of things, I've had a little bit of tough luck with cross-country so I'm just aiming to be competitive in every race I run this season, from the state level to national level. That being said, for me, the team goals come before mine. I want to do my very best to help the team achieve the goals we've set and after that, I can work on my own goals.