Analysis: The guys from Dana Hills have been one of the top teams in California for several years. This year they look to put things together to claim a CIF State title - which they haven't won since 2009 - and make it to NXN. The past four years they have finished top three or better at the Division 1 CIF State Cross Country Championships. In that same amount of time, they have gone to NXN three times.

This team brings back four of its top seven runners including its third best guy at the state meet Simon Fuller. 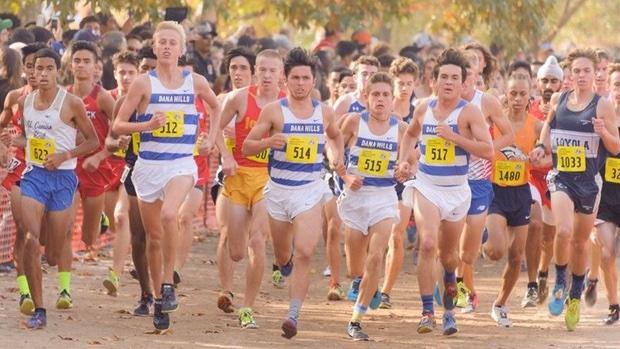 How long have you been a Coach? How many of those years have been at your current school?

I have been coaching for 22 years, 19 at Dana Hills

What is your meet schedule this fall?

How has summer training gone for your team? What do you focus on during the summer months?

Summer has been good, great to see kids who want it stepping up. In the summer we focus on our base and team bonding. We just got back from our team trip to Jalama Beach were the kids ran, surfed, and grew together as a family.

Which athletes do you see as the probable top five this season?

Cole Andrew, Carrick Denker, Simon Fuller, Garrett Hough, and Cole Stark are our projected to be our top 5 for now.

Cole Andrew, Carrick Denker, Garrett Hough, and Cole Stark are our captains/leaders because of their character, attitude, and relationship with their teammates. Captains/leaders aren't always the fastest ones, but in this case, they are.

Who are some new faces who will make an impact on your team this year (i.e. freshmen, transfers, runners who have improved a lot)?

We have a transfer in Cole Stark who came to us from Canyon High School in Anaheim. He's an avid surfer who moved here to be at the beach. He has already stepped up as a runner and a leader. Sophomores Brandon Pizzano aka "Ratatouille" and Gianni Viola look very promising and will be pushing for a varsity spot. Junior Omar Garcia has the potential to maybe surprise some people.

I would have to say Harbor Hills, Bow to Stern, and our Flag run would be a few of the workouts that stand out to me. All involve a good hill workout, and each one has its own painful way.

What has it been like being one of the best teams in the state and even the nation but not being able to win a state title in almost a decade?
It's been tough not winning a State Title since 2009, we have been runner-up 4 times and 3rd twice. Down years in 2011 (6th) and 2012 (8th). We always come into the season with a mentality that we can run with anyone.
What factors do you think have attributed that (above question)? How do you plan to combat the factors that you can control this year as much as possible?
Attributing factors are that California has some of the best teams in the nation year after year. Dana Hills has been fortunate to be a top tier team over the past 2 decades, but teams like Great Oak, Arcadia, and Loyola to name a few have challenged and pushed us to up our game. I don't believe that there are any secret magical workouts the kids do. It comes down to their attitude, commitment, and willingness to sacrifice for the good of the team. We always review the season with the kids for feedback and to talk about what we did right, and what we need to change for next year. This year's Dana team has had to deal with different setbacks, but I feel that they are better for it. We continue to stress the little things and that together we can do anything. No one is bigger than the team and the kids believe that. If all works out the way we have planned it, you won't ask me this question next year ;).

How would you describe your team's culture?

Family, we are a band of brothers who care for, look out for, and run for each other. We have fun in and out of practice, but we make sure we get our job done 1st.

What are your top three goals for the team this fall?

Get mentally tougher, become better young men in all aspects of life, and win a State Championship!